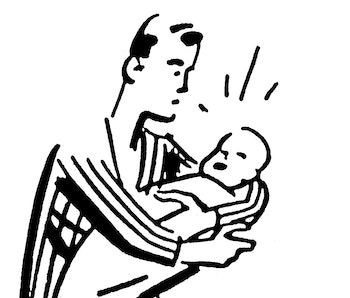 "Baby talk" may sound silly to adult ears, but this kind of parentese plays a crucial role in language development. And teaching parents how to speak to their infants could help boost their ability to communicate — improving their long-term language skills, according to a new trial.

“Most parents know that talking to their baby is a good thing, but what they don't necessarily always understand is that it's not just hearing talk,” Naja Ferjan Ramírez, co-author on the study and researcher at the University of Washington, tells Inverse.

“It's engagement," Ramírez says. "It's drawing children into conversation. It’s not just about the words.”

Parentese is like a social hook for language development. Talking to your baby in the right way can result in larger vocabularies and improved language skills for babies down the line, she says.

The randomized controlled clinical trial is detailed in a study published Monday in the journal Proceedings of the National Academy of Sciences.

The science of “baby talk”

Since the 1960s, researchers have repeatedly shown that parantese is near universal — it is used by both parents and siblings to talk to infants across genders, cultures, and backgrounds, and in remarkably similar ways. Baby talk, regardless of the actual language you speak, has simpler grammar, a higher pitch, and exaggerated intonation than casual speech. In parentese, "good" becomes "gooooood," for example, or "want to" becomes "waaaannaaa."

"Parantese is a mechanism that allows babies at a very young age to be drawn into conversation."

The study adds to a growing body of research showing children’s early childhood language environment —especially how many words they are exposed to daily — shapes their language outcomes in the long run. But it also shows that specific interventions for parents can help boost the positive effects of parantese for their children.

The trial builds on a 2018 study that found parantese coaching increased babbling among babies. The infants also produced more words at different developmental stages — both of which are signs of improved language development.

Most parents aren't even aware that their voice changes when they chat with their baby, so making such adjustments intentional may result in better language abilities in adulthood, the researchers suggests.

In the trial, the research team recruited 71 “typically developing” six-month-old babies and their families. The families were split into coaching and non-coaching groups to determine whether parentese training could enhance parent-child communication patterns.

The researchers recorded how parents communicated with their babies every four months between the ages of six and 18 months. To do that, they placed audio recorders in the pockets of little vests that the babies wore around the house for 12-hour periods. At the 4-month checkpoints, the researchers played back samples of the recordings to parents in the coaching group, reviewed the coaching group’s use of parantese, and offered feedback. In these training sessions, the coaching group and the researchers also discussed social activities — specifically Vroom Brain Building Moments — that are used to promote children's language skills. Then, they analyzed how many words the babies produced at each time point, as well as parents’ reports of their child’s language skills.

Training sessions significantly increased parents’ use of parantese and their conversational back-and-forth with their child. These shifts correlated with faster learning and better language skills among the coached group's infants when compared to babies of parents who didn’t receive any training.

Ramirez and her team hope to replicate the experiment in multilingual groups, and with young children with language problems or delay.

So for all the parents out there feeling silly chattering with their babies, the study shows it could help your little one communicate better later in life.

“We really emphasize this engagement piece— the back and forth, that parents can create with their child. And that's much more critical than just the sheer number of words that babies hear," Ramirez says.

"Parantese is a mechanism that allows babies at a very young age to be drawn into conversation."

Abstract: Parental language input is one of the best predictors of children’s language achievement. Parentese, a near-universal speaking style distinguished by higher pitch, slower tempo, and exaggerated intonation, has been documented in speech directed toward young children in many countries. Previous research shows that the use of parentese and parent–child turn-taking are both associated with advances in children’s language learning. We conducted a randomized controlled trial to determine whether a parent coaching intervention delivered when the infants are 6, 10, and 14 mo of age can enhance parental language input and whether this, in turn, changes the trajectory of child language development between 6 and 18 mo of age. Families of typically developing 6-month-old infants (n = 71) were randomly assigned to intervention and control groups. Naturalistic first- person audio recordings of the infants’ home language environment and vocalizations were recorded when the infants were 6, 10, 14, and 18 mo of age. After the 6-, 10-, and 14-mo recordings, intervention, but not control parents attended individual coaching appointments to receive linguistic feedback, listen to language input in their own recordings, and discuss age-appropriate activities that promote language growth. Intervention significantly enhanced parental use of parentese and parent–child turn-taking between 6 and 18 mo. Increases in both variables were significantly correlated with children’s language growth during the same period, and children’s language outcomes at 18 mo. Using parentese, a socially and linguistically enhanced speaking style, improves children’s social language turn-taking and language skills. Research-based interventions targeting social aspects of parent–child interactions can en- hance language outcomes.