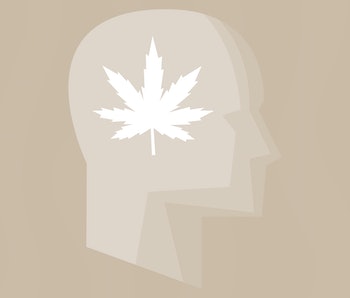 The list of reasons why people use marijuana is long, including but not limited to, wanting to feel a euphoric high, decompress from a long day's work, alleviate pain, socialize, or get to sleep. Certain groups — about 25 percent of people with anxiety or mood disorders – use marijuana to self-medicate mental health symptoms.

According to a new study, this type of consumption is on the rise. After tracking the marijuana use patterns of more than 16,000 people over 11 years, researchers discovered that people with depression were approximately twice as likely to consume marijuana than those without depression.

"This could be the case if an increasing number of individuals with depression are using cannabis to self-medicate, potentially influenced by media and advertising presenting cannabis as beneficial to health," the study authors write.

The researchers describe this stark uptick as an issue: According to current evidence, marijuana isn't likely to help depression. In some cases, the scientists explain, using marijuana for depression can even backfire — making depressive symptoms worse, not better.

As some states legalize weed and public stigma around the substance dissipates, researchers predict this trend toward use will continue. They caution people to look beyond misleading reports by cannabis companies and media reports making false promises about marijuana and depression.

The findings were published Tuesday in the journal JAMA Network Open.

To figure out who, exactly, is using marijuana, the team harnessed data collected between 2005 and 2016, which tracked the cannabis use of 16,216 adults between the ages of 20 and 59. This group was surveyed as part of the National Health and Nutrition Examination Survey, a national, annual, cross-sectional survey in the United States.

Researchers asked each participant "how many times have you used cannabis in the past 30 days?" in biannual surveys. Participants were then split into three groups:

To establish if people had depression, the researchers administered the Patient Health Questionnaire–9, A survey that asks participants about certain mental health symptoms. If a patient scored over 10, they were identified as positive for depression. Overall, 1,413 of the 16,216 participants screened positive for major depression. Out of this group, 81 percent described some resulting difficulty in their work, home, or relationships.

"Clinicians should be aware of these trends and the evidence that cannabis does not treat depression effectively..."

Across the 11 year study period, the rate of depression among the group remained stable. However, the use of cannabis increased sharply, particularly by individuals with depression. From 2005 to 2006, the prevalence of any past-month cannabis use was 12.2 percent, and the prevalence of daily or near-daily past-month cannabis use was 3.8 percent. By 2015 to 2016, these figures had increased to 17.3 and 6.1 percent.

Between 2005 and 2016, people with depression's marijuana use sped up "significantly faster" than those without depression, the researchers write.

These findings "concerning, given that both heavier use and depression have been associated with increased risk of cannabis-related harm," the authors write.

Based on nationwide trends, these consumption patterns aren't slowing down.

"Clinicians should be aware of these trends and the evidence that cannabis does not treat depression effectively when discussing cannabis use with patients," the authors write.

In health care settings where depression is discussed, the team suggests talking with patients about how often they use marijuana, strategies for cutting back, and the effects of cannabis on depressive symptoms may be useful.

Present research on marijuana and mental health is a mixed bag. Some studies link marijuana to a heightened risk of schizophrenia and psychosis. Other studies say the evidence isn't strong enough to pin down how marijuana impacts mental health, including these conditions or depression.

Research on large cohorts like this one will help pin down exactly how marijuana influences depression.

Objective: To examine the association of depression with past-month cannabis use among US adults and the time trends for this association from 2005 to 2016.

Design, Setting, and Participants: This repeated cross-sectional study used data from 16216 adults aged 20 to 59 years who were surveyed by the National Health and Nutrition Examination Survey, a national, annual, cross-sectional survey in the United States, between 2005 and 2016. Data analysis was conducted from January to February 2020.

Exposures: Survey year and depression, as indicated by a score of at least 10 on the PatientHealth Questionnaire–9.

Conclusions and Relevance: The findings of this study indicate that individuals with depression are at increasing risk of cannabis use, with a particularly strong increase in daily or near- daily cannabis use. Clinicians should be aware of these trends and the evidence that cannabis does not treat depression effectively when discussing cannabis use with patients.

This article was originally published on Aug. 20, 2020