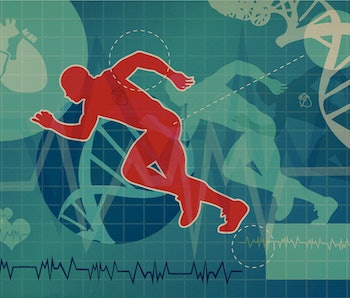 There are plenty of external factors that might push you to consider running a marathon for the first time, like a New Year’s resolution, this inspiring video of Eliud Kipchoge breaking two hours for the first time, or watching Brittany Runs a Marathon. In turn, at the end of that months-long training process, you can expect some sore knees and — according to new research — a younger-looking heart.

Based on the training experiences and cardiovascular health of 138 first-time marathon runners, scientists suggest that training for a marathon can knock four years off of the heart’s biological age. Marathon training decreased aortic stiffness, which is when the heart’s major artery becomes inflexible, and lowered blood pressure by about 4mmHg on average.

Senior lecturer at the University College London Charlotte Manisty, the paper’s senior author, tells Inverse that these changes, if sustained, could reduce stroke risk by about 10 percent. Adding to that, the training-induced changes to blood pressure had an “equivalent effect to that of many blood pressure medications.”

“Although these changes may appear small, they are likely to be clinically meaningful,” Manisty explained.

These findings were published Monday in The American Journal of Cardiology but first appeared during a May 2019 presentation at a European Cardiology Society meeting.

Importantly, overtraining for a marathon, or jumping into too much training right away, can cause a host of problems — from joint pain that comes from running with bad form to stress fractures from pushing too hard too fast. However, this new study suggests that following a sensible, typical training plan appears to come with serious heart benefits.

At the European Cardiology Society meeting Anish Bhuva, the study’s first author, explained that these effects on the heart can be attributed to the process of training, even if you don’t execute an extremely intense training plan.

“By completing training, and getting to the finish line, it is possible to rejuvenate the cardiovascular system of first-time marathon runners,” Bhuva said.

This study followed 138 healthy people who committed to running the 2016 or 2017 London Marathons. That was the first time any of these participants had run marathons before, and as part of their training, they were encouraged to follow a 17-week beginner’s training plan.

This training was unsupervised, and the participants were “encouraged” to do more training if they wanted to. That lack of supervision means that its hard to be prescriptive about how much running each person did in over the course of six months. But the scientists estimate that each person ran between 6 miles and 13 miles per week in preparation for their 26.2 mile race.

The authors point out that their study “was not designed to provide structured training” but instead was supposed to “observe the effects of ‘real-world’ preparation for a marathon.” These runners weren’t held to any higher standards than your average first-time marathoner, yet their still hearts reaped the benefits.

"You don’t have to be an elite athlete to gain the benefits from marathon running."

Taken together, the team found that men’s hearts had greater reductions in aortic stiffness than the women’s hearts. Those reductions were the equivalent of an additional 1.4 fewer years of aging. The team also found that the older marathoners (above the age of 37, in this case) seemed to reverse vascular aging more than their younger counterparts.

“You don’t have to be an elite athlete to gain the benefits from marathon running, “ Bhuva said in May, when the research was first presented. “In fact the benefits appeared greatest in those who were older and slower.”

Scientists have tried to pin down the exact “dosage” of exercise that’s needed to contribute to a myriad of health benefits. The US government suggests 150 minutes per week of moderate intensity physical exercise for general health. But even as much as 10 minutes of light exercise each day or a short midday exercise break can improve mental health.

In this study, the authors note that the amount of exercise needed to “rejuvenate” the cardiovascular system in a real-world setting isn’t really known. They can’t offer an exact training plan or minutes of exercise that will lead to that effect. However, their work highlights how the body changes when you decide to train for a goal, even if you don’t train in a perfect, scientist-prescribed way.

Overall, these participants only saw small change in their VO2 max, a measure of aerobic fitness. The authors note that this type of training plan was designed to “habituate individuals to sustained running rather than augment fitness.”

Signing up for the marathon was supposed to get people into running and create a habit that had demonstrable benefits on their health. Manisty explains that just having the goal of a marathon in mind was enough to set up healthy habits and create lasting changes to the heart.

“We know that training with a focussed goal is more likely to lead to sustained compliance with exercise training than without such a goal,” she says.

Manisty notes that simply having a “target to aim for” likely helped the study participants train more effectively than if they weren’t thinking about a specific goal.

The goal here was just to commit to making it across the finish line. Deciding to take those first steps, the researchers argue, can help set up healthy habits that go beyond the completion of your first marathon, and into your everyday life.

Longevity Hacks is a regular series from Inverse on the science-backed strategies to live better, healthier, and longer without medicine.

HOW THIS AFFECTS LONGEVITY – Training for a marathon knocked four years off of the heart’s biological age. That meant that the aorta, the heart’s major artery, became more flexible and blood pressure dropped about 4mmHg on average.

WHY IT'S A HACK – Those changes to the heart could reduce stroke risk by about ten percent, the study’s senior author added. It could also lower blood pressure in a manner that was “equivalent effect to that of many blood pressure medications."

SCIENCE IN ACTION – These changes were seen in 138 real-life runners who trained for their first marathon ever. They followed a basic marathon training plan and the scientists estimated that they ran between 6 and 13 miles per week. It’s important to be careful not to overdo it, as marathons are tough on the body, but regular aerobic training can really benefit the heart.

Conclusion: Training for and completing a marathon even at relatively low exercise intensity reduces central bloodpressure and aortic stiffness—equivalent to a w4-year reduction in vascular age. Greater rejuvenation was observed in older, slower individuals.