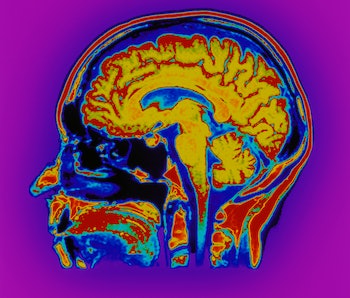 Ketamine is inching its way toward becoming a mainstream mental health therapy, and a slew of new research suggests it has real potential to treat conditions like depression.

For example, a study published in September in the Journal of Clinical Psychiatry suggests the anesthetic significantly reduced symptoms of depression, anxiety, and suicidal ideation within a cohort of 424 patients who attended ketamine clinics in Virginia. Because the study did not include a control group or systematically assess side effects, it has its limitations — but experts still say the results reinforce why so many researchers are excited about ketamine's potential.

Meanwhile, a separate study also published in September, this time in the American Journal of Psychiatry, found the anti-depressant effects of ketamine may be boosted when individuals who take it are also shown positive words and images. This may be because ketamine seems to open up a “plasticity window” in the brain that helps forge new connections. This result could signal a potential method to extend ketamine’s benefits — ketamine’s effect can diminish in a few weeks after its use, and infusions can be expensive.

As papers like these add to the pile of research on ketamine — and as the need for accessible, effective mental health treatments becomes increasingly obvious — it’s worth reviewing what ketamine is, what it can do, and the role it may play in the future of medicine.

Ketamine is an FDA-approved anesthetic. It was developed in 1964 as a replacement for phencyclidine, a hallucinogenic drug that was once used an anesthetic and is now more infamous for its moniker — PCP — and the dangers associated with it.

Research interest in using ketamine to treat psychiatric conditions emerged in the 1970s, and the first formal investigation of the drug began in the 1990s. Ketamine was first found to have a rapid antidepressant effect in a randomized double-blind trial in 2000.

Ketamine is an N-methyl-D-aspartate receptor antagonist, which means it tamps down the activity of these receptors. This inhibition is thought to explain why it works as an anesthetic but over the years scientists have found ketamine causes a wide range of different molecular effects. Research suggests ketamine can prompt neuronal growth while increasing levels of glutamate in the brain. This effect is why ketamine can cause one to be in a dissociative state — it is also why it’s used in medicine and popular as a party drug.

It’s complicated. It is FDA-approved as an anesthetic — but the FDA does not recognize ketamine as a mental health treatment. The Drug Enforcement Agency classifies ketamine as a Schedule III narcotic.

In 2019, the FDA approved esketamine for treatment-resistant cases of depression. Esketamine is derived from part of the ketamine molecule; it is more potent so it can be used at a lower dose. Esketamine is delivered via a nasal spray in a clinic — because it can distort your perception, all this is meant to happen under a doctor’s supervision.

But ketamine is sometimes prescribed to some people for “off-label” use — that means it’s legal for a licensed clinician to prescribe ketamine for a use that is not FDA-approved. In these cases, ketamine is typically delivered via intravenous infusion.

When describing off-label use, the FDA notes that: “If you and your healthcare provider decide to use an approved drug for an unapproved use to treat your disease or medical condition, remember that the FDA has not determined that the drug is safe and effective for the unapproved use.”

This loophole is what has allowed the recent proliferation of ketamine “wellness centers” and startups that sell ketamine tablets. But some experts warn that in many cases this application of ketamine is not comparable to what’s observed in studies. In turn, often there are no licensed medical professionals overseeing the administration of ketamine in these situations, and the drug’s use is not typically partnered with psychotherapy or another intervention.

How can ketamine help mental health?

While some ketamine clinics advertise ketamine as a one-size-fits-all solution for multiple mental health conditions, the science is more limited.

The research is most robust when it comes to treatment-resistant depression. This is when a person diagnosed with major depressive disorder does not respond to anti-depressants after at least six weeks of use. It can be a life-threatening condition, and is experienced by an estimated one-third of patients with depression.

Studies have also found ketamine can reduce the severity of depression in people with suicidal ideation, prompting them to be less likely to harm themselves.

Research also suggests it rapidly confers these benefits and is safe in the short term. Because the therapeutic delay associated with other anti-depressants can put patient safety at risk, the fast-acting nature of ketamine is a large part of its appeal.

Scientists are hopeful that further studies will verify its use as a multi-purpose therapeutic treatment and that it eventually can be used to quickly aid people who come to the hospital looking for psychiatric help.