"I guess the right word is crises." 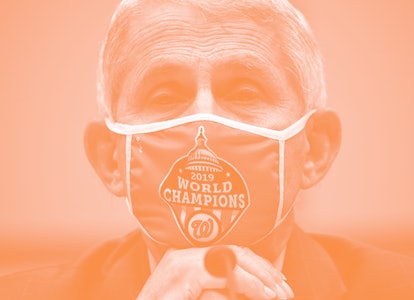 After his August vocal chord surgery, Anthony Fauci was spending the weekend resting his voice. It was wishful thinking.

“Then we had a bunch of emergency, catastrophic White House-related – I guess the right word is crises,” he told Today.

Much has happened in the weeks directly following Fauci’s surgery. Here’s Fauci on why Labor Day will help us forecast the pandemic’s fall, the CDC’s new testing guidelines, the earlier-than-expected arrival of a coronavirus vaccine, who is missing from vaccine trials, and a QAnon conspiracy theory that took over Twitter last weekend.

As a public service, Inverse is aggregating Fauci's comments regularly in the "Fauci Dispatch" series, as the White House has severely limited his visibility to the public.

Fauci on Labor Day – Speaking on a White House call with state governors, Fauci indicated that Labor Day will be a key indicator that tells us if the US will have a “running start” in containing the coronavirus this fall. The tape was obtained by The Associated Press.

On the call, Fauci said he had a “great deal of faith in the American people.”

The backdrop – New coronavirus cases are down nationwide after spiking this summer – at their peak, the US recorded over an average of 65,000 cases per week. As of the week of September 1, they’re down to about 42,000. We’ve still totaled over 6 million cases in the US so far.

The goal is for Labor Day to not be a repeat of Memorial Day: Cases started to trend upward across the country again after Memorial Day and continued to climb into July. In California, public health experts reported some spikes related to July 4th gatherings – but also cautioned that other factors, like reopening, may have also played a role. It was around Memorial Day when Arizona and Florida also began to relax restrictions.

Labor Day has the potential to drive another spike, particularly in states where the percent of tests returned positive is high.

Fauci hopes that after the long Covid-19 summer, things may be different this time, and urged people to wear masks, meet outside, avoid crowds.

Fauci gives a tentative date for a vaccine – Speaking to The Times newspaper in the UK, Fauci put out his best guess as to when we will know if we have a potential coronavirus vaccine:

“I would say a safe bet is at least know that you have a safe and effective vaccine by November,” Fauci said.

The backdrop – Fauci’s comments come on the heels of nine vaccines that are currently in Phase 3 clinical trials – the third and final round of human testing. Three of these vaccines are undergoing these trials in the United States.

"I would say a safe bet is at least know that you have a safe and effective vaccine by November."

Should they show overwhelmingly positive results, the possibility that a vaccine could be approved early would increase, Fauci says. However, this is only true if the independent group of experts who make up the Data Safety and Monitoring Board see a huge protective potential.

If that’s the case, the vaccine could receive and emergency use authorization, becoming the first vaccine to do so.

There is increasing political pressure to deliver a vaccine this year. Speaking at the Republican National Convention, President Trump said the US “will produce a vaccine before the end of the year, or maybe even sooner.” Meanwhile, Fauci says he’s “not concerned about political pressure.”

Fauci on who is missing from vaccine clinical trials – Speaking to ABC News Fauci indicated that clinical trials on Covid-19 vaccines need to be as diverse as the nations they seek to serve:

“I would like to see a percent enrollment commensurate with the percent represented in society,” he said.

The backdrop – Despite the fact that Black people have died at 2.4 times the rate of white people due to the coronavirus, only two of the 45 people enrolled in Moderna Inc's first stage coronavirus vaccine trial were Black. Moderna’s vaccine is a leading candidate.

Fauci’s comments indicate that the largest stage clinical trials should reflect the demographics. Data from 2019 indicates that 13.4 percent of the US population is Black, and 18.4 percent is Hispanic. According to Fauci, these groups should be represented or even over-represented in clinical trials because of the threats posed by Covid-19.

As of August 28, an estimated 24 percent of participants in Moderna’s Phase 3 trial were from communities of color, according to a post on the company’s Twitter account. That was up from 18 percent the week before, CNN reported.

Fauci on the CDC’s new testing guidelines – In August, the CDC updated the recommended testing guidelines. Even those who believe they have been exposed to someone with coronavirus, “do not necessarily need a test”, the new guidance read. It has since been updated again to re-include those who have been exposed to someone with Covid-19 as candidates for testing.

“I was under general anesthesia in the operating room and was not part of any discussion or deliberation regarding the new testing recommendations,” Fauci told CNN.

The backdrop – While the initial change may reflect constraints in the testing supply chain, it could also disrupt efforts to test asymptomatic patients – people who don’t show symptoms, but can spread the virus.

Fauci told CNN that he was concerned that these new recommendations would “give people the incorrect assumption that asymptomatic spread is not of great concern.” A July PNAS paper found that over one-third of silent infections need to be suppressed to suppress future outbreaks.

The change to the CDC’s guidelines inspired a storm of criticism. And some state governors, like Gavin Newsom in California and Andrew Cuomo in New York, have indicated that their states will not follow the new guidelines.

Fauci on the “6 percent” conspiracy theory – On Sunday, President Trump retweeted a post from "Mel Q" a follower of the conspiracy group QAnon. That post said that the CDC had "quietly" updated guidelines to suggest that only 6 percent of Covid-19 deaths – about 9,000 people – had died of the disease alone. The rest had "2-3 serious illnesses" the poster continued.

"That does not mean that someone who has hypertension or diabetes who dies of Covid didn’t die of Covid-19 — they did," Fauci said. "It’s not 9,000 deaths from Covid-19, it’s 180-plus-thousand deaths."

The backdrop – As Fauci points out, the coronavirus strikes people particularly hard who have underlying illnesses.

It also ravages multiple organ systems and sets off a "chain of events" that can lead to death, added Bob Anderson the lead mortality statistician at NCHS told CNBC in a statement. He explains that the disease was listed as an underlying cause of death in 92 percent of deaths were Covid-19 was mentioned.