What foods boost gut health? A doctor reveals the biggest mistake you can make

“Digestion can be very personal.” 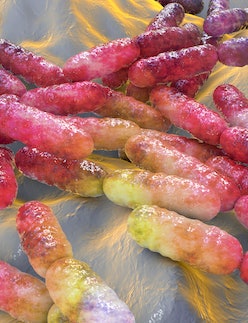 It’s impossible to talk about the gut without getting a little scatological.

The human gut runs from your stomach on down — at its most fundamental level, the gut is composed of a series of stages that takes the food you put in, processes it, and then puts out the waste materials. But the work of digestion isn’t accomplished by your cells alone. Rather, it is the collective work of billions of micro-organisms.

This mega colony, also known as the microbiome, that lives in your gut helps break down food by absorbing some of what you eat. And as Napoleon said, an army marches on its stomach — you need to keep this garrison of bacterial soldiers well fed in order to prevent health issues — from the more mundane, like bloating, to the more consequential, like bowel diseases and immune system problems.

The right foods can introduce both new bacteria and support the existing microbes in your body so that they can do their job well and you don’t suffer stomach cramps as a result of eating fries. But gut health is about more than just a pleasant trip to the bathroom, Dr. Linda Shiue, a practicing physician and chef, tells Inverse.

“What we eat, and how that changes, can affect the population and types of gut bacteria you have within a matter of days,” she says.

Thriving bacteria colonies support our health and well-being in ways scientists are only just beginning to investigate now.

Though the science is young, there are older, established truths when it comes to caring for your gut, Shiue says. When it comes to eating for the gut, most people make one fundamental error in deciding what they should include in their diet, she says: They forget to think about what they are not eating.

The interview below has been lightly edited for house style and clarity.

Inverse: How do you define a healthy gut?

Dr. Shiue: A healthy gut means different things to different people. For me, when I think about a healthy gut, I’m actually talking about the microbiome. Those are the colonies of bacteria that live in your gut and are really important not just for digestion, but for everything in the body. Chronic diseases and inflammation are both affected by the bacteria that we have in our gut. These colonies are very sensitive to our diet. What we eat, and how that changes, can affect the population and types of gut bacteria you have within a matter of days.

How does a healthy gut support overall health, and how does it make you feel?

What most people feel is really their digestion. Without getting too graphic, you don’t want to have abdominal pain, or trouble digesting. Digestion can also be very personal. People with certain sensitivities, like IBS, may not be able to eat a lot of things that we would normally consider healthy.

Are there any misconceptions about gut health?

A lot of people think, ‘If I want to improve my gut health I’ll just take a probiotic supplement.’ It sounds easy — you take a pill, and you don’t have to think that much about what you eat. Unfortunately, some of the supplements that you get without a prescription really don’t have any effect at all. There are certain ones that are prescribable by a doctor and there’s more evidence that those support healthy bacteria, but a lot of the over-the-counter ones don’t work.

I prefer to talk about what you should and shouldn’t eat to naturally develop healthy gut bacteria.

What should we eat for a healthy gut?

Cutting those foods out or reducing them can make a big difference, and not just in your digestion. Artificial sweeteners, for example, have been shown to be associated with higher blood sugar levels in some instances. The theory is that because they mess with your microbiome, they lead down a pathway to inflammation, which is a root cause for many chronic diseases.

The things you can eat that promote a healthy gut fall into two categories: probiotics and prebiotics. Probiotics can be found in fermented foods that have live bacterial colonies. That would be things like yogurt, sauerkraut, kimchi, and kombucha. Of course, not all yogurt is like that. A lot of the yogurt that we have available on the shelves these days is more like pudding. It has a lot of sugar, and may not have active cultures.

The other category is prebiotics. These are foods that gut bacteria need to thrive. Pretty much anything high in fiber is a good prebiotic. These foods lead to the generation of healthier gut colonies because the bacteria feed on them through different metabolic processes. Probiotics and prebiotics from food sources are the things I advise first for people who want to improve their gut health.

“The most important thing is what not to eat.”

What can people look for on ingredient lists to determine if a food is good or bad for the gut?

Look for yogurt with a statement that says it contains active or live cultures. Check ingredient lists for chemical names, and things that say “added for texture.” Mono and diglycerides, glycol monostearate, and glycol distearate have been shown to be harmful to gut bacteria, as well as food coloring. Things you don’t recognize are likely not the best for you.

What advice do you have for someone who is having problems with their gut health?

Work with a dietician, keep a food diary, and bear in mind that the elimination diet isn’t forever.

A dietician may recommend trying a special diet, like a low FODMAPs diet. This is a diet that avoids produce that has a certain type of starch that some people can’t digest. It’s a type of elimination diet that people with IBS sometimes are encouraged to go through with monitoring by a dietician.

You really shouldn’t do it on your own. It’s very challenging to figure out what foods are causing digestive problems because we eat so many different things. A registered dietitian will be very systematic about helping you figure out which foods cause trouble.

Most importantly, I’ve seen people who seem to think that once you go on an elimination diet you actually can’t eat those foods ever again, but part of the elimination diet is reintroducing foods one at a time to see what happens. That helps you pinpoint what’s causing problems.

“People figured it out in their kitchens before we had medicines or doctors.”

When you want to do something kind for your gut, do you have any go-to meals?

A lot of things that can make your food taste good can also be good for gut health. This is where I like to bring in fermented foods and some spices. That’s the whole basis of my book, Spicebox Kitchen. We use spices for flavor, but they were also our first medicine. There are certain spices that are good for stomach problems. Ginger is one of them— it’s really good for nausea, and it can help with bloating.

Some people don’t tolerate beans, they get a lot of gas. That has to do with the inability to digest certain starches. Several cultures have actually developed cooking techniques that make foods easier to digest and give you a happier gut. In Latin American cultures they use epazote, an herb that looks a little bit like basil but has a very distinctive flavor. It’s a classic ingredient in many Latin American bean dishes, and it reduces those starches that make people gassy. In Japanese cultures, they often use kombu or kelp when cooking legumes, and in Indian cooking, you’ll see asafoetida. These ingredients reduce the gas-producing properties of beans.

I always find it interesting that people figured it out in their kitchens before we had medicines or doctors. It’s a good example of how we can use flavorings to improve digestion without even thinking about it. These recipes became traditional ways of cooking, and they support your gut.