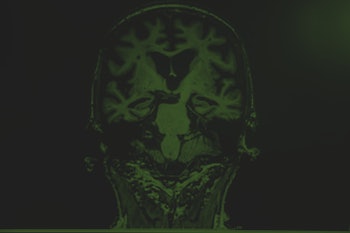 The latest research into a well-known early warning sign for Alzheimer’s disease shows a disturbing way in which certain populations may be most at risk of cognitive decline — specifically people who identify as Black or Hispanic.

The early warning sign in question, known as subjective cognitive decline, is characterized by “the self-reported experience of worsening or more frequent confusion or memory loss.” It’s also one of the earliest signs of Alzheimer’s disease and related dementias.

What’s new — The new study, led by Sangeeta Gupta at Delaware State University, involved 179,852 adults in the United States aged 45 or older who self-reported on a measure of subjective cognitive decline.

It involved people across multiple ethnic and racial demographics, and it comes to one unignorable conclusion: The communities that already carry a disproportionate burden in terms of chronic disease — specifically Black and Hispanic people — are most at risk of earlier onset of subjective cognitive decline.

“Minority groups in the U.S. are more vulnerable to memory loss, confusion, and their consequences earlier in life,” Gupta tells Inverse. In other words, people who identified as Black or Hispanic were more likely to report symptoms of subjective cognitive decline years before their white counterparts.

“It is vital to put a spotlight on cognitive impairment-related disparities that may exist among minority communities,” she says.

Here’s the background — Subjective cognitive decline plays havoc in the everyday lives of people who manifest its symptoms. It affects people’s ability to work, household chores, take medications, and other day-to-day business, and it is frequently correlated with other health issues, like heart problems and high blood pressure.

When someone has subjective cognitive decline as well as one of these other conditions, then their chance of developing Alzheimer’s disease and related dementias increases dramatically.

Why it matters — Cognitive decline is a terrifying sign of a brain deteriorating with stress and age.

But to break down why this study’s findings really matter, Gupta gives Inverse some specific reasons:

1. Minority populations are projected to rise to 56 percent of the total U.S. population in 2060.

2. Age-related chronic conditions, such as Alzheimer's are projected to disproportionately affect minorities, both in terms of prevalence and severity.

3. Minorites are also more likely to score lower on measures of access to healthcare, education, income, and social support. They are more at-risk of certain chronic health problems, like heart disease and diabetes, which are in turn linked to higher risk for Alzheimer’s.

How they did it — Gupta analyzed self-report data from 179,852 adults in the U.S. aged 45 or older. The data had been collected from 2015 to 2018 as part of the Behavioral Risk Factor Surveillance System, which is a huge, health-related national survey.

Respondents from across the U.S. and Puerto Rico answered six questions designed to self-assess their levels of memory loss and cognitive ability.

The respondents were then grouped by age, health, and race or ethnicity, and then compared to population-level data.

What they discovered — The result of the analysis was striking, Gupta says — especially when it came to the age of respondents showing signs of decline.

“Adults aged between 45–54 years are at the peak of their careers regards to salary, productivity, and contributions to their retirements. [Subjective cognitive decline] may lead to functional limitations that have a substantial social and economic impact on these individuals and their families,” Gupta says.

The study also found that less than 50 percent of the minority groups had discussed their symptoms with a healthcare provider, though that wasn’t significantly different from the white population. That said, early detection is of paramount importance when it comes to managing dementia.

So what’s driving the association between subjective cognitive decline and minorities in the U.S.?

Gupta believes there are two primary factors at play here:

What’s next — Gupta says she hopes the study results will help “public health stakeholders make data-driven decisions and be better prepared for the challenges associated with disparities in cognitive decline.”

For example, these communities could benefit from culturally sensitive, realistic, and effective outreach and screening efforts. Healthcare providers beginning a dialogue with family members and other caregivers about cognitive decline, what to watch for in its progression, and starting to think about a plan if it turns into Alzheimer’s.

The healthcare of people with subjective cognitive decline matters to all of us. It affects the healthcare system, the economy, and very likely, our own family.

Hopefully, studies like Gupta’s will make people with power investigate and remedy the systemic forces that make ethnoracial minorities so disproportionately affected by the condition.

Abstract: Subjective cognitive decline (SCD), characterized by self-experience of deterioration in cognitive performance may be a precursor to Alzheimer’s disease (AD). Given the association of AD with dependence and disability for a long duration, earlier the detection, the sooner people and their families can receive information regarding better management. It is critical to explore disparities amongst racial and ethnic populations with SCD in order to facilitate targeted interventions. The primary objective was to identify disparities in prevalence of SCD amongst Whites, Blacks and Hispanics by select sociodemographic characteristics and functional limitations in a U.S. population-based sample of non-institutionalized adults aged 45 and older. The secondary objective was to assess the association between SCD and select chronic conditions (angina, heart attack, stroke, diabetes, high blood pressure and high cholesterol) by race/ethnicity.

This article was originally published on June 23, 2021