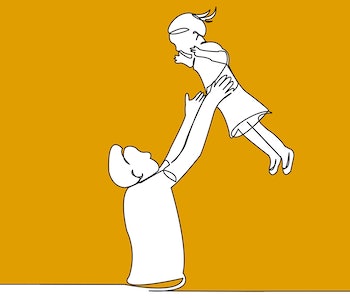 When women become mothers, they experience profound changes to the mind and body: hormones fluctuate, brain structures shrink and expand, and they experience physical shifts. Scientists have spent decades capturing the scale and scope of these changes, but until recently, the biology of fatherhood remained relatively unexplored.

Specifically, new father's oxytocin levels often rise and testosterone dips, their brains become more attuned to parent-related stimuli, they gain weight, and they experience changes in the way they sleep, workout, work, and relax. It turns out, dad bods are real, and here's the science explaining why.

James Rilling, a neurobiologist and anthropologist at Emory University, has spent years studying the science of fatherhood.

"I still think that mothers go through more dramatic changes than fathers do," Rilling tells Inverse, noting the hormones of pregnancy prepare mothers for caregiving.

"The interesting thing that we have learned recently is that even though fathers do not go through pregnancy, they are still somehow experiencing some hormonal changes that seem to be consequential."

What changes in a dad's body chemistry — In 2014, Rilling and a team of researchers wanted to know more about how men's brains and bodies transform after children. Using 88 heterosexual, biological, married fathers of children between one and two, and 50 men without kids, they compared hormone levels and neural responses to both parent-related stimuli and sexual stimuli.

Compared to non-fathers, dads had lower levels of testosterone, and higher levels of oxytocin. Oxytocin, commonly known as the "love hormone," is closely linked with maternal bonding and relationships. Testosterone is often associated with aggression — some scientists think lower levels after fatherhood might enable fathers to be less hostile and more sensitive to their children.

"A lot of people think of oxytocin as a maternal hormone," Rilling says. "What's not intuitive to a lot of people is that oxytocin is also important for fathers and for paternal caregiving."

Meanwhile, when researchers showed fathers pictures of toddlers (the parent-related stimuli), they showed a stronger activation than non-fathers within brain regions involved in face emotion processing as well as motivation and reward. The more involved a dad was in caregiving based on the mother's recollections, the stronger the activation in these brain regions.

"When you become a father, a lot of that energy that might have gone toward mating gets redirected towards parenting," Rilling explains.

Oxytocin may be enhancing paternal empathy and paternal motivation, he adds. This emotional change could be pivotal throughout children's psychosocial development but especially during a baby's newborn stage, when crying is prolonged and sometimes, inconsolable.

"There's good evidence that some of the hormonal changes that fathers are experiencing like the decline in testosterone and the increase in oxytocin are probably both important for facilitating empathy at that time and for preventing fathers from acting out on impulses of frustration," Rilling says.

"The evidence that we have so far suggests that these hormonal changes are not permanent," Rilling explains. "Changes in testosterone are most pronounced during the first year of the infant's life and then, they seem to rebound and recover after that."

Other research conducted on prairie voles and California mice, two of the few animal species where males are involved in offspring caregiving, shows similar hormonal shifts. When male prairie voles become fathers, they show an uptick in the number of oxytocin receptors in the nucleus accumbens, a brain area involved in reward. It may be that the father's brain is getting prepared to be more sensitive or responsive to oxytocin because the receptors are being upregulated, Rilling explains.

Another study in California mice shows when males become fathers, they have more estrogen in their brain and less testosterone because a particular enzyme called aromatase gets upregulated.

"It's been shown experimentally that that change is critical for them becoming good fathers and becoming caregivers in the way that they're supposed to," Rilling explains.

Costs and benefits — Across the board, dads tend to get less sleep, be more stressed, and gain more weight than nonfathers.

But according to Rilling, who recently interviewed 120 dads from the Atlanta area on the rewards and challenges of fatherhood, these day to day costs are dwarfed by the ultimate sense of fulfillment and meaning derived from becoming a parent. Rilling notes fathers may even more deliberate about taking care of their health and mitigate these costs, recognizing they have children to be healthy for.

It's true that fathers struggle with financial responsibilities, relationship issues with their partner, sleep and work-family conflict, Rilling says. But almost without exception, he adds, if you ask them: 'Has having a child added meaning and purpose to your life?' They emphatically say yes.

"Even though the day-to-day happiness or satisfaction takes a hit, men are experiencing fulfillment and increased meaning and purpose, and I think they are willing to make that trade-off," Rilling says.

Scientists still have a long way to go in understanding how fatherhood impacts biology. They haven't yet tracked men through the transition into fatherhood and comprehensively measured the psychological and physiological changes over time. Much more research is needed.

"We probably haven't acknowledged as much as we should that fathers are also experiencing some significant changes, though, not on the scale of what mothers are."