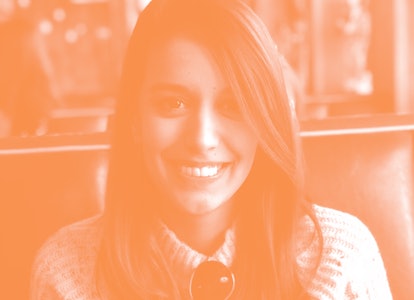 Christina Alexander was having an unsettling experience. It was a Saturday night in mid-March, and the 26-year-old was cooking up a stir-fry in her small Chicago apartment. Steam from the teriyaki-soaked vegetables rose into the air. But as the dish sizzled on the stove, something wasn't right.

In fact, she couldn't smell or taste anything. Then she realized: she had Covid-19. Like an estimated 34 to 68 percent of people infected with the virus, she had distorted sensory perception.

"I was exposed to how bad this could have been, so at first, I was just thankful that it wasn't worse," says Alexander, who is a nurse practitioner. She has treated people with life-threatening cases of Covid-19. While her own case was relatively mild, she lives with disturbing consequences.

Her sense of smell may never return, she tells Inverse.

"It's kind of hit me that it's probably going be a forever thing, which is really frustrating."

For the majority, anosmia, the technical term for smell blindness, tends to clear up within a month or two. The same goes for loss of taste, called ageusia.

But not for Alexander.

"It is really sad to get a bouquet of flowers and not be able to smell them."

It's been more than seven months since her infection cleared. Although her ability to taste has partially returned, she still can't smell any aromas besides extremely strong coffee and gasoline.

Anosmia and ageusia don't compare to some of Covid-19's severest symptoms, like respiratory failure or lung, liver, and heart damage. But these sensory effects can be extremely distressing and are reshaping the daily life of thousands of survivors in ways they never expected.

"Safety-wise, it sucks," Alexander says, noting her inability to smell burning food or dangerous fumes. "Pleasure-wise, it is really sad to get a bouquet of flowers and not be able to smell them. And it's not like my other senses are 'spidey senses' and are heightened."

The sudden drop — Based on the alarming prevalence and cases like Alexander's, scientists have pushed for loss of smell and/or taste to be added to the list of hallmark Covid-19 symptoms. In turn, the Centers for Disease Control and the World Health Organization added both features to their lists of Covid-19 symptoms in late April.

"Covid-19 is a new disease and often it takes a while for new findings to be adopted by policy," Rachel Batterham, an endocrinologist at the University College London Hospital, tells Inverse.

Batterham co-authored a recent study that found four of five people with recent smell or taste loss had Covid-19 antibodies.

Importantly, 40 percent of these people never experienced a cough or fever.

Some scientists, like John Hayes, director of the Sensory Evaluation Center at Pennsylvania State University, argue anosmia is the single best predictor of Covid-19. While a low fever or cough is easy for people to ignore or attribute to other problems like allergies, sudden loss of smell, especially without congestion, is both notable and harder to explain away, Hayes told Wired in September.

These sensory signals are often the earliest and only indicators of the disease, especially in otherwise asymptomatic people. Based on growing evidence, sudden drops of smell and taste should be used as vital markers to spur testing and isolation measures that could, in turn, curb Covid-19's lightning spread.

Some scientists, like Richard Doty, the director of the Smell and Taste Center at the University of Pennsylvania Perelman School of Medicine, even say olfactory testing may be a more reliable form of Covid-19 testing than PCR testing, the current "gold standard" testing method — although more research is needed to confirm this theory.

"The evidence here is clear. Countries need to recognize loss of smell and/or taste as a key symptom..."

"The evidence here is clear. Countries need to recognize loss of smell and/or taste as a key symptom of Covid-19 along with fever and cough," Batterham says.

People who notice a change in their ability to smell everyday household odors, such as garlic, onions, coffee, and perfumes, should self-isolate and seek Covid-19 PCR testing, she advises.

Sensory deprivation — While Alexander battled her Covid-19 infection in Chicago, Sarah Marquart, a 28-year-old who works in media, faced the same viral invader in New York.

"At first, the biggest thing was having aches. It almost felt like being sunburnt," Marquart tells Inverse. Marquart was fatigued but wasn't coughing, and assumed she'd caught a late-season case of the flu.

"I had some serious questions about whether that type of life would be worth living."

A week into her infection on March 20, a friend sent Marquart a chocolate cake to celebrate her birthday.

"It was the first real thing that I'd eaten that had flavor, and I couldn't taste any of it," Marquart says. "It was different than when things taste bland or a little bit off. It tasted like nothing."

Marquart's sensory symptoms lasted for a month. Her partner, Ross Gleason, who also came down with Covid-19, couldn't taste or smell anything for two months.

"We were so desperate to smell something, we'd open a jar of crushed garlic and just sniff it deeply to see if we could sense even a hint of the smell," Marquart says. "We also created gross shots of concoctions with garlic, Worcestershire sauce; all to try to taste something."

Another person interviewed by Inverse named Young says he lost his sense of taste for two weeks. (Young asked to withhold his last name over privacy concerns.) The 34-year-old tax attorney, who is based in London, started experimenting to see if he could smell anything.

"I would dump a lot of peppers into what I was eating just to feel the pain in my mouth," Young tells Inverse. "And I'm like, 'Okay, at least that's not gone.'"

For both Young, Gleason, and Marquart, facing life without tasting the tang of a hoppy beer, relishing a comfortingly cheesy plate of mac and cheese, or savoring the umami of ramen, was grim.

"I wasn't having suicidal thoughts or anything, but I had some serious questions about whether that type of life would be worth living," Young says. "It was a very scary thought to think that it could be permanent. I don't know what I would have done."

Anosmia's mental toll — All of the survivors of Covid-19 Inverse spoke to for this story who experienced smell or taste loss say their experiences pale in comparison to some of the devastating outcomes others have suffered.

But they also note that anosmia and ageusia take a serious mental toll, far larger than they could have anticipated.

"People are idiosyncratic regarding smell loss's effects on them," Doty tells Inverse. "For some, they accept it and move on. For others, it becomes the focus of their lives."

Each person's experience with anosmia and ageusia is unique, but often, losing these senses threatens health and well-being. People with olfactory dysfunction report difficulties with cooking, dwindled appetite and enjoyment of eating, challenges with maintaining personal hygiene and social relationships, fear of hazardous events or feeling less safe, and greater symptoms of depression and loneliness. According to a 2015 study, smell loss is associated with a three times higher incidence of mortality in older populations.

"Loss of sense of smell and taste markedly impacts upon a person’s quality of life as smell and taste are really important for the rewarding aspects of eating," Batterham says. "This also represents a safety risk in that people are unable to smell danger signs of fire or gas."

Smell science — The process of smell starts when a substance — a flower or freshly baked bread, for example — releases molecules that stimulate smell-specific nerve cells located high in the nasal cavity. These nerve cells send information to a specific area of the brain, which identifies the specific smell's source and relays other pertinent information, like whether it signals something burning.

This ubiquitous, primal ability shapes how humans navigate the world. It fundamentally influences our ability to taste food and detect dangerous threats in the environment. Smells can be both pleasurable or ick-inducing, but they are always useful.

Prior to Covid-19's emergence, anosmia and ageusia were typically associated with respiratory viruses, head trauma, neurodegenerative diseases, and aging. Now, due to Covid-19, the sensory disorders are alarmingly common, especially in otherwise young, healthy people. Females also seem to be experiencing these side effects more than males, although researchers aren't sure why.

"The destructive power and the exact mechanism of SARS-CoV-2 [the virus that causes Covid-19] on the olfactory system remain unknown," olfactory specialists wrote in a recent literature review on the topic calling the current research and evidence "fragmented and unsystematic."

Some say the sensory symptoms are most likely due to acute virus-related damage to the olfactory bulb or epithelium, the sheet of neurons and supporting cells that line half the nasal cavity and conduct our sense of smell. Others say inflammation or mucous blockages are the culprits.

After multiple scent tests and scoping procedures, Alexander reports there isn't any inflammation or a tumor inside her nose. Instead, her olfactory nerves are completely fried.

According to her ear, nose, and throat specialist, there is a less than one percent chance her ability to smell will return as the months wear on.

While these odds are striking — and demoralizing — it's hard to predict the long-term sensory consequences of Covid-19. As people continue to come down with and recover from the virus — and suffer these sensory complications — scientists will gain a better idea about what's really at stake.

Many people, like Marquart and Young, appear to experience relatively quick and spontaneous recovery of their missing senses. But for those who don't, like Alexander, limited evidence-based treatments for agnosia and ageusia exist. Steroids, gene therapy, stem-cell therapy, and even surgery show promise, but there aren't any silver-bullet solutions.

Smell training, where people smell four different odors twice a day in order to help the brain relearn which smell is which, has shown the most success. Alexander has been smell training for months — but has had no luck so far.

"My doctors sent me a smell test, which is like a scratch and sniff including 80 different scents," Alexander recalls. "I scored a three out of 80. And yesterday I ran through dog poop, came home, and couldn't smell it."

Faced with skyrocketing numbers of cases like Alexander's, researchers at Penn, Stanford, Vanderbilt, and other global institutions are racing to find therapies to give people back their sense of smell and taste.

Facing the future — Ultimately, Alexander's lingering Covid-19 smell loss appears to be relatively rare. If people notice a sudden drop of taste or smell, it is likely a sign they've got Covid-19 or another respiratory virus. But it is not a given that they have lost these senses forever.

"If they experience such loss of unknown cause, then some authorities would suggest immediate self-quarantine for a week or two," Doty advises. "A PCR test should also be taken as soon as possible, although several may be needed if the first is negative," he adds.

For others who haven't suffered this kind of sensory loss, Alexander hopes her experience offers a sobering insight into the complex ways Covid-19 impacts the body and mind.

"I get really frustrated when people in their twenties are reckless because I'm 26-years-old and completely healthy, and this happened," Alexander says.

"There is a reason to be wearing a mask because this is 100 percent real. It's not a hoax. People get it and they have lifelong symptoms."