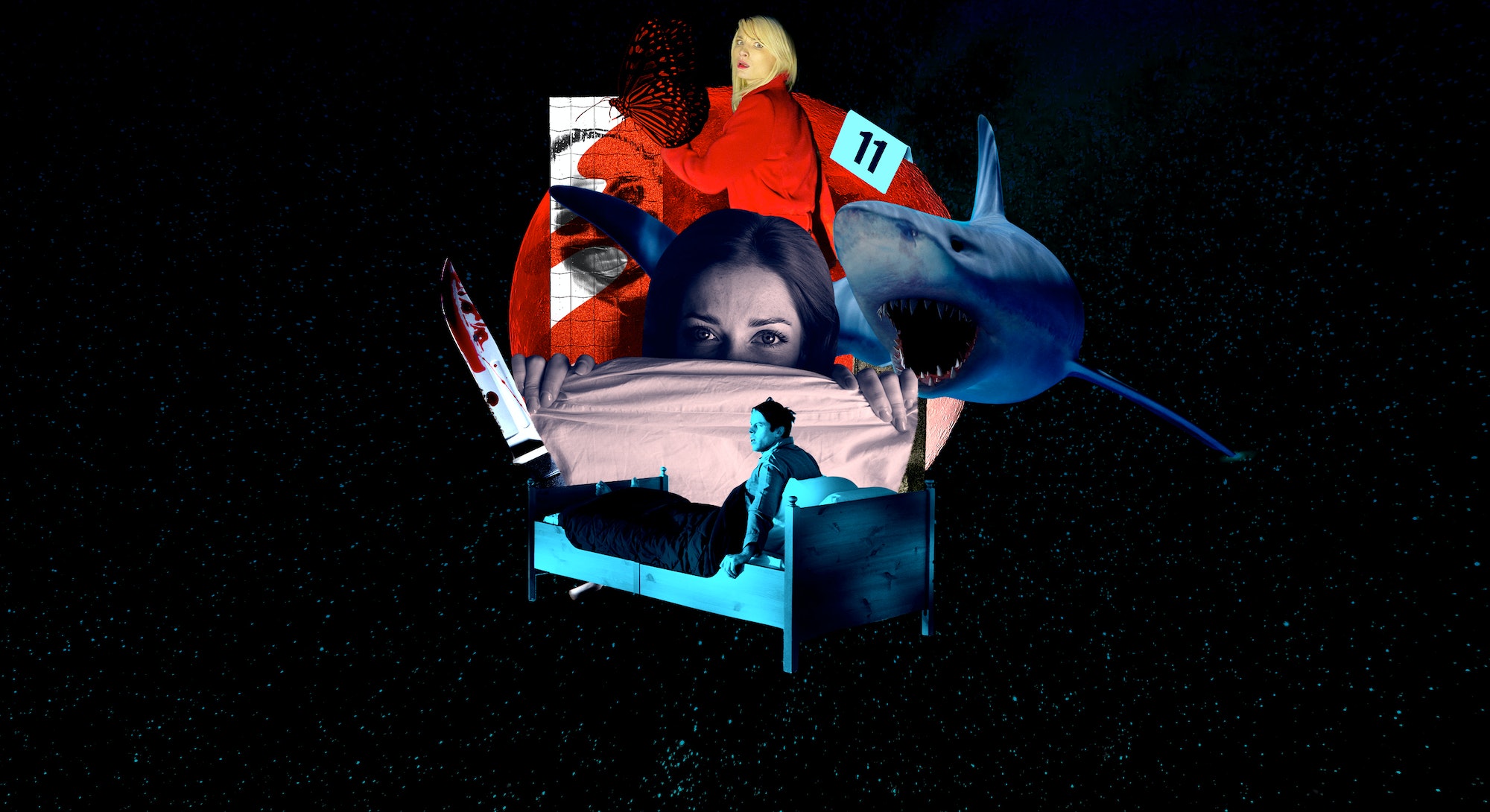 It all started with a talking cockroach. “I could hear its mouth clicking as it talked, and feel its legs scratching me,” Kristina Wallace writes to Inverse about the first nightmare she can recall. She was 4. By 6, she started wondering why nobody else was afraid to fall asleep. Bad dreams still plague her now, at age 32.

Nightmares, the worst types of dreams, are a part of ourselves, which is an even scarier notion than the dream itself. “Dreams are internally generated,” psychiatry professor Rafael Pelayo at Stanford University tells Inverse. “They represent your thoughts and your fears. You’re basically being scared of something you made yourself.” The outside world may supply nightmare fuel, but it’s our psyche that assembles the wretched fantasy.

Nightmares distress all dreamers, but once they begin interfering with one’s daily life, they broach disorder territory. Nightmare disorder (ND) is characterized by four or more recalled nightmares per week and persistent feelings that creep into day-to-day living. ND usually begins between ages 3 and 6, and for some, it can wane after age 10. About 4 percent of adults experience ND symptoms.

A few established treatments exist for this condition. Prazosin, which also treats hypertension, is the main medication prescribed. But for many, including Wallace, established treatments don’t cut it. Recently, researchers have been investigating alternative therapies, including a cognitive-based therapy approach as well as lucid dreaming. These newer treatments both hold promise in helping better treat nightmares as well as help us finally understand them and why take over our minds.

Your brain on nightmares

As the brain sleeps, Pelayo says, one part is dreaming and one part generates dream content in two distinct processes. He says the pons, located in the brainstem, is considered the “main generator” flipping the switch for dream mode. If the act of dreaming occurs in the pons, the raw materials come from the hippocampus, which is a memory and emotion hub, and the associative cortex, which covers our noodle’s surface and deals with sensory input. Meanwhile, the frontal lobe, which commands executive function and reasoning, decreases in activity. Pelayo explains this slowdown may be why we don’t question our dream’s reality, leaving us vulnerable to talking cockroaches.

Wallace’s ND can “easily become debilitating,” she writes. Nightmares will make her jumpy in the waking world. She’ll awaken from a nightmare in which she was shot, only to proceed through her day with a ghostly pain in that same place.

“You do live with one foot in dreamland at all times,” she writes to Inverse. Wallace is a craftsmaker in Arizona.

“Explaining ND can be hard because if you don’t explain it well enough, it just sounds like a fever dream, but really you’re immersed in this intense story where you experience everything as if it were actually happening,” Wallace writes. Everyone grasps for straws when trying to describe a dream, but Wallace is surprised to find that long after a dream has faded, she recalls the biting cold of a mountain where she dodged a grizzly for what felt like weeks.

ND is a disorder in and of itself, but it can also be a consequence of post-traumatic stress disorder (PTSD), which can result from real experiences. Pelayo explains a theory that PTSD is the brain’s failure to forget. “It’s nice to have a good memory, but it’s equally important to be able to forget. You shouldn’t clutter your brain with every little thing,” he says.

Learning to live with — and tame — the beast

A form of cognitive behavioral therapy called imagery rehearsal therapy (IRT), in which the dreamer consciously returns to a nightmare and revises the ending, has emerged as a treatment for nightmares.

“It’s basically putting you back in charge,” Pelayo says. Nightmares may come from our very own brains, but that doesn’t mean we don’t have any say. “If you’re an artist and made a scary picture, you could change the picture, right? You can also change your dreams.”

IRT has had mixed results for Wallace. While she says it only “somewhat works” for her, she still practices it. Even if she can’t find a happier ending, it helps process her pain. “I tend to let my brain go through what happened and then hug my inner self so I can have some reassurance that it’s not real or couldn’t actually happen,” she writes.

“If you’re an artist and made a scary picture, you could change the picture, right? You can also change your dreams.”

A study published in October in the journal Current Biology sought to supplement IRT with another process called targeted memory reactivation (TMR). Through TMR, one associates a particular memory or feeling with a cue. This cue could be a sound or scent, as smell has been found to be the sense most strongly associated with memory.

In this small study of 36 people with ND, researchers from the University of Geneva split patients into two groups. Over two weeks, one group practiced only IRT. The other group practiced IRT in tandem with TMR, in which during daylight hours they practiced IRT while listening to a particular sound — the piano chord C69, played for one second.

While sleeping, the latter group wore headbands that could detect when participants entered REM (rapid eye movement) sleep, slumber’s deepest phase, during which dreaming occurs, and then play that chord. In theory, this group has associated a more positive dream ending with this sound. Once this sound plays and penetrates the subconscious at what could be the most terrifying point of a dream, that could help surface feelings of safety and control in the midst of a nightmare.

After the two weeks, the group that performed both IRT and TMR suffered nightmares less frequently and enjoyed more positive emotions in dreams than the group that did IRT alone, based on self-reported questionnaires. This decrease persisted after three months without further intervention.

Lead author Sophie Schwartz, a neuroscience researcher at the University of Geneva, emphasizes that both groups’ nightmares lessened. However, the IRT plus TMR group saw an even greater drop, and that this change stuck around surprised Schwartz and her team.

Schwartz is hopeful for this treatment. “By deploying and popularizing easy-to-use devices at home to produce permanent consolidation of safety memories, these therapies can easily reach a big part of clinical populations and lead to new innovative approaches for promoting emotional well-being,” she writes to Inverse. While this is a proof-of-concept study that requires more investigation, it lays a foundation for future research on this combined cognitive therapy.

Furthermore, Schwartz emphasizes that IRT, an already established regimen, is still worth trying as treatments for ND and other conditions that cause frequent nightmares slowly progress.

The study left a good impression on Pelayo, who says this is the first clinical application of TMR he’s seen. That a sound cue associated with positive emotions mitigated nightmares “was very cool,” he says. He’s interested in seeing this practice used during sleep stages besides REM and in larger groups of people.

Wallace knows that right now there’s no way to halt nightmares altogether, but she has an arsenal of coping mechanisms. To name a few, she avoids music with lyrics and percussion, exercises to physically exhaust her body, and consumes caffeine only before noon. Her two dogs and husband, who also has ND, are a boon too.

She adds one last tip: “As much as everyone’s tired of hearing it, learn to love yourself and speak kindly to your inner mind,” she writes. “Yes, I still have nightmares every night, and they really suck, but they’re so much easier now that I can calmly talk to myself during the dream.”

There’s one more remedy, Pelayo says, that could be useful. Lucid dreams, while difficult to achieve regularly, seem to effectively trounce nightmares. In this state, the dreamer is fully conscious and in control of decisions and actions while remaining in the dream.

In the International Lucid Dream Induction Study, the results of which were published in 2020 in the journal Frontiers in Psychology, researchers investigated cognitive techniques to induce lucid dreaming in 355 participants and found that 55 percent of those in the study experienced at least one lucid dream when employing a method.

IRT is a step toward lucid dreaming. It helps the dreamer regain some control. Lucid dreaming is a bit harder to master, says Pelayo. Master lucid dreamers control not only their actions but the entire dream. It can even help us venture to hidden parts of ourselves, turning the terrifying unknown into a quixotic experience we could never hope to have.

Pelayo recalls a student of his late colleague William Dement — known as the father of sleep medicine — who taught himself lucid dreaming. The student had a nightmare of falling off a cliff. Dement instructed him to let himself hit the ground while in the lucid state.