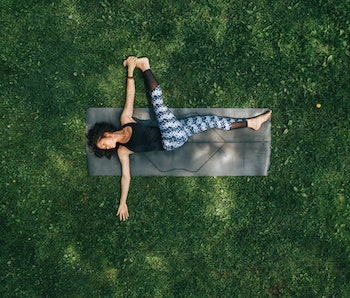 You might not associate an allergy attack or seasonal sniffles with a weekly workout — but a chemical in the body ties them together in one unexpected way, suggests new research.

A study released Wednesday in the journal Science Advances found people given histamine blockers missed out on the long-term benefits of exercise after completing a workout regimen.

Wim Derave is a professor in the Department of Movement and Sports Sciences at Ghent University in Belgium and the senior author of the study. He tells Inverse histamine — a chemical compound in the body — is “essential for you to improve your body function.”

“If you take that away, you block that, then it's not going to happen,” Derave says. In other words, if histamine functioning is dampened, it could be that the benefits of exercise are too.

Critically, Derave and colleagues say their research does not mean people should stop taking histamine blocking medication. Ultimately, this is more about learning a new way the body responds to exercise — and the benefits of a better workout don’t outweigh the potential negatives of not taking medication.

What does histamine do to the body?

Histamine is a chemical in our body that wears many hats. It’s produced as part of the immune response to foreign pathogens. It’s also triggers itching, regulates gut health, and acts as a neurotransmitter.

For example, an allergen can trigger an increase in histamine, which makes blood vessels expand and muscles swell up. This can be protective to our body but also cause harm.

As the idea of “exercise is medicine” gains steam — that is, using exercise way to treat or prevent health problems — researchers are seeking to fully understand the underlying biological mechanisms at play when we exert ourselves physically.

How they did it — To examine the difference between exercising “normally” and exercising with blocked histamine receptors, the researchers had a small group of healthy adults perform the same kind of exercises after swallowing capsules of either H1 or H2 histamine blockers.

The scientists measured various markers of what they called “training adaptations” in both groups to compare them. These adaptations are long-term effects of exercise, like improvements in performance, glucose tolerance or insulin sensitivity, and vascular function.

“That was surprising to us.”

The study was divided into two parts. In the first part, 6 men and two women were instructed to perform a bike exercise for 40 minutes. They completed the exercise twice: Once after taking the H1/H2 histamine blocker, and once with no blocker. The scientists measured the participant's blood pressure, heart rate, and blood flow before and after the experiment.

Part two focused on 18 male participants, whose same vitals were also measured before and after the experiment. This group was asked to perform two different bike exercise tests to determine various exercise capacities and a vascular function test. In the exercise phase, the study team also measured other markers like heart rate and energy expenditure.

After taking baseline muscle biopsies and giving a glucose tolerance test, this group was then placed on a 6-week training regimen. They did cycling exercises three times a week that increased in duration every week: Half took the histamine blocker and half took placebo capsules an hour before exercise. The study participants were not told which pill they received.

After the training period, the scientists took muscle biopsies and gave a glucose tolerance test. Finally, the study team asked participants to perform the original bike exercise tests and measured the same markers as before.

What they found — Participants who took histamine blockers saw fewer improvements in key measurements after long-term exercise than the ones who hadn’t, suggesting histamine and its receptors play a bigger role in how the body reacts to exercise than previously thought.

“We almost completely blocked out all the beneficial effects of exercise by blocking these two receptors, or this is one molecule, histamine,” Derave says. “That was surprising to us.”

In the first part of the study, which focused on the short-term, participants who took the histamine blockers had a smaller increase of blood in their muscles. This may partially explain what followed in the long-term training: After the long training regimen, the study team saw what they refer to as “blunted training adaptations.” This means no improvement in exercise efficiency and heart rate, and worse outcomes than the comparison group in other markers.

The cause may come down to the complex interplay between histamine receptors and other processes of the body, the study team suggests.

What happens on a cellular level with exercise — generally positive changes to metabolism and blood vessels — appears to depend on the “signals” histamine receptors send. Histamine blocking seemingly prevents optimal blood flow to muscles after exercise, which might be essential for muscle recovery.

Why it matters — Few studies have examined the role of histamine in exercise. Still, the ones that have found short-term exercise paired with histamine blockers did stop blood vessels from swelling. But these findings were limited to short-term periods of exercise and immediate follow-up.

This study suggests the long-term effects of exercise — benefits that can make a big difference in the health of those who try it — are limited by what happens to histamine receptors.

“They sweated just as much, they exercised just as much, and so there was nothing different - they couldn't see it either,” Derave says. “The beneficial effects were not taking place, although they thought and they hoped that they would.”

But the authors make the key distinction: these results don’t mean that people should stop taking antihistamines to get better gym results.

The results do suggest histamines play a key role in exercise and show how this process works on a biological level. And since the study was conducted in a small group of healthy adults, mostly male, the results don’t necessarily apply to everyone else yet.

What’s next — Ultimately, the results could advance exercise in a therapeutic setting because there’s a possibility that activating histamine receptors could boost the benefits of exercise.

The authors say their next move would be to try the same experimental method in a population with a chronic illness or condition, and see if their bodies reacted in the same way. They also want to pinpoint exactly where histamine is produced.

If they could understand the histamine better, “then we can also maybe think of even more exercise or training modalities that would be even more effective in having health benefits,” Derave says.

Abstract: Exercise training is a powerful strategy to prevent and combat cardiovascular and metabolic diseases, although the integrative nature of the training-induced adaptations is not completely understood. We show that chronic blockade of histamine H1/H2 receptors led to marked impairments of microvascular and mitochondrial adaptations to interval training in humans. Consequently, functional adaptations in exercise capacity, whole-body glycemic control, and vascular function were blunted. Furthermore, the sustained elevation of muscle perfusion after acute interval exercise was severely reduced when H1/H2 receptors were pharmaceutically blocked. Our work suggests that histamine H1/H2 receptors are important transducers of the integrative exercise training response in humans, potentially related to regulation of optimal post-exercise muscle perfusion. These findings add to our understanding of how skeletal muscle and the cardiovascular system adapt to exercise training, knowledge that will help us further unravel and develop the exercise-is-medicine concept.