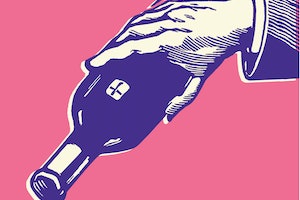 Dry January formally began in 2013 as a public health campaign challenging people to give up alcohol for at least one month. Today, it’s more of a cultural phenomenon — debated on talk shows, embraced by health publications, and allegedly over-documented on social media. But as Eater writer Jaya Saxena observed in 2020, “criticizing anyone’s sobriety, even when it’s limited to a month, is an irresponsible, dick move.” And while it’s become monetized and trendy, Dry January is still the real deal. Giving up alcohol is good for you, and the safest level of drinking is none.

In 2018, University of Sussex researchers wanted to document what actually happens if you participate in Dry January, so they interviewed 800 participants. A myriad of effects were observed — 88 percent saved money; 71 percent realized they don’t need to drink to enjoy themselves — and 71 percent achieved the holy grail of health effects. They slept better.

Sleep, you may not realize, is very, very good. It plays a critical role in metabolism, learning, and memory. Sleep is essential for the brain and every tissue in the body. Sleep is the difference between robust mental and physical health, and the opposite of that. Alcohol interrupts the benefits of sleep in all sorts of ways.

Why is alcohol bad for sleep?

The answer is complex. Initially, alcohol can act as a sedative and reduce the amount of time between being fully awake and asleep, a process known as sleep onset latency. But despite the reputation of the nightcap, that’s not always true. Sometimes alcohol has a stimulating effect when consumed at a low dose, and when blood alcohol levels rise within the first hour after consumption.

But alcohol also disrupts sleep, especially the period of rapid eye movement (REM) sleep. In part, this is because the sedating effects wear off. According to a 2009 analysis, the sedating effects of a moderate consumption (so two to three standard drinks) can last for several hours. Then, about two to three hours after blood alcohol concentrations near zero, the brain shakes it off. The study gives this example:

“Metabolized at a rate of approximately one glass of wine per hour, after 5 drinks at 10 p.m., the alcohol level will be near zero at 3 a.m., with an increase in arousal from this time onwards. REM rebound occurs in the second half of the night associated with intensive dreaming or nightmares. These effects contribute to sleep fragmentation.”

In other words, in healthy non-alcoholics, drinking disrupts the quality of sleep during the second half of the night.

The more you drink, the worse your sleep is likely to be. According to a 2020 study published in Nature, “heavy consumption of alcohol over an extended period of time leads to increased tolerance and this tolerance is accompanied by adaptation of the neurotransmitter systems.” A 2018 study that evaluated 4,098 Finnish subjects found while low amounts of alcohol — fewer than two servings per day for men or one serving per day — decreased sleep quality by 9.3 percent, moderate amounts decreased sleep quality by 24 percent, and high amounts by 39.2 percent.

In a 2015 study published in the journal Alcohol, scientists found the primary cause of poor sleep post-binge drinking was a disruption to sleep homeostasis — the body’s system for regulating one’s need for sleep. Alcoholics, they write, both during drinking periods and when they abstain, still suffer from a “multitude of sleep disturbances” like insomnia and daytime sleepiness because of this disruption.

“The prevailing thought was that alcohol promotes sleep by changing a person’s circadian rhythm — the body’s built-in 24-hour clock,” lead author Mahesh Thakkar, a professor at the University of Missouri-Columbia, explained in a statement.

“However, we discover that alcohol actually promotes sleep by affecting a person’s sleep homeostasis — the brain’s built-in mechanisms that regulates your sleepiness and wakefulness.”

What does this mean on an individual level? How exactly alcohol affects one’s sleep depends on a number of factors, including their health history, how much one drinks, when one drinks, and other stats like age and sex.

For example, research suggests men’s quality of sleep appears to be more affected than women’s. While findings for women are not clear, when it comes to men, drinking more than 168 grams of alcohol per week, compared to abstaining, is associated with waking up several times a night.

And if one suffers from insomnia, the negative relationship between alcohol and sleep can be bidirectional — with alcohol causing insomnia-like symptoms and people misguidedly using alcohol to fall asleep.

Overall, if you are looking to drink and you also want to sleep well, it’s recommended to not drink within four hours of going to bed. (Other studies have found that late afternoon “happy hour” drinking can disrupt sleep as much as six hours before bedtime.)

And if you want better sleep overall, Dry January is always an option.