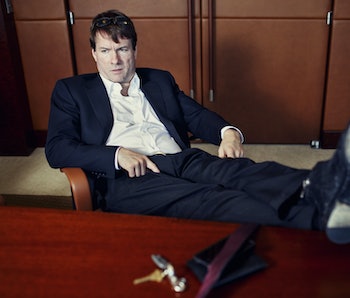 Bitcoin and other cryptocurrencies are back with a bang. As the world reels from 2020's economic whiplash, cryptocurrency could offer a (socially distant, even) alternative to government-backed coin. Manufacturers like Tesla are putting their cash into Bitcoin, and Mastercard will soon support certain cryptocurrencies, too.

This renaissance places crypto back in competition with cash and gold assets, which are regulated and minted by governments, and generally considered stable. Cryptocurrency, meanwhile, is mined using computer code. Without the same government oversight, the value of this currency skyrockets the more people invest in it.

Today, 1 Bitcoin is worth over $47,000. Perhaps no businessman is as enthusiastic about investing in Bitcoin as Michael Saylor, CEO and co-founder of the business intelligence company MicroStrategy. Now, the multimillionaire is bringing other entrepreneurs like Elon Musk into the Bitcoin fold.

Here are 29 reasons you need to know about Michael Saylor, and why he is leading a new Bitcoin evangelism.

29 REASONS is an occasional series from Inverse that offers essential context about something new in the world.

WHO IS MICHAEL SAYLOR?

Here are ten fast facts about this multimillionaire you should know:

1. Saylor was born in Lincoln, Nebraska.

2. Growing up, he lived on multiple Air Force bases.

4. Saylor has never been married.

5. He attended the Massachusetts Institute of Technology (MIT) on a Reserve Officers' Training Corps scholarship.

6. At MIT, he double majored in aeronautics and astronautics, and science, technology, and society.

7. Despite having ambitions to be a pilot, a benign heart murmur diagnosis kept Saylor grounded.

8. Saylor is worth $500 million, but this figure is not certain.

9. Growing up, Saylor played Dungeons and Dragons, and always insisted on being the Dungeon Master because he "liked to create and control situations."

10. He owns a yacht named USHER — after a computer software, not the singer.

Keep reading for facts 11 through 29!

On December 20, 2020 Musk posted an image to Twitter suggesting his interest, shall we say, in Bitcoin. Saylor immediately responded:

"If you want to do your shareholders a $100 billion favor, convert the $TSLA balance sheet from USD to #BTC. Other firms on the S&P 500 would follow your lead & in time it would grow to become a $1 trillion favor."

And just as fast as Bitcoin can take off, so has Michael Saylor's social capital risen, too.

11. Saylor co-founded the company MicroStrategy in 1989, alongside his MIT roommate and fraternity brother, Sanju Bansal.

12. MicroStrategy is a business intelligence company that uses computer software to collect and sell consumer insight to customers.

13. In many ways, MicroStrategy is the forebearer of targeted ads as we know them today.

14. MicroStrategy was originally a data-mining company, but a contract with McDonalds in the '90s shifted the company's focus to business-intelligence software instead.

15. Saylor is also an author, and published the book "The Mobile Wave: How Mobile Intelligence Will Change Everything" in 2012.

16. In 2000, MicroStrategy was accused by the U.S. Securities and Exchange Commission for fraudulent finance reports. The claims were eventually settled, with Saylor himself paying $8.3 million of his personal money.

WHAT IS MICHAEL SAYLOR'S CONNECTION TO TESLA?

18. On February 3 and 4, Saylor held a "Bitcoin for Corporations" conference. The meeting was an attempt to convince other corporate executives of the benefit of Bitcoin for their portfolios. Executives from over 1,400 firms were in attendance

19. Among the guests were at least three SpaceX executives, according to news reports. SpaceX is Elon Musk's aerospace firm, essentially a sister business to Tesla.

21. Musk has previously had extended conversations with Saylor on Twitter about the benefits of a Bitcoin portfolio.

23. Saylor has called 2021 the "year of institutional investment" in Bitcoin.

WHY IS MICHAEL SAYLOR INVESTING IN BITCOIN?

24. Practicing what he preaches, Saylor's MicroStrategy has to date invested in 71,079 bitcoin, which is worth an estimated $3.3 billion at today's prices.

25. Described by many as a "Bitcoin Bull," Saylor has said that he believes cryptocurrency will be a more reliable asset than gold, saying to Bloomberg "The scarcest asset in the world is bitcoin. It's digital gold."

"Once people start thinking about what they want, which is a non-sovereign, safe-haven store of value, they're going to realize that Bitcoin does the job of gold better, and you're seeing all of the institutional flows move out of gold into Bitcoin," Saylor said in a statement to Bloomberg.

27. In addition to investing MicroStrategy's money into Bitcoin, Saylor himself (as of October,) held close to 18,000 Bitcoin.

28. Credit card firms, like Mastercard, are also jumping on board. On Wednesday, February 10, Mastercard announced it would begin offering cryptocurrency support in 2021.

29. Despite a stock slash on the same day as the Mastercard announcement of 23 percent, over six-months of Bitcoin investment, MicroStrategy's stock has risen more than 700 percent.

IS BITCOIN THE FUTURE OF INVESTING?

If you were to ask Michael Saylor, he'd probably say yes.

Ultimately, if financial institutions like Mastercard and technology company's like Tesla begin to wade deeper into the crypto-waters, Bitcoin and other cryptocurrencies may be here to stay, finally.

But it's still too soon to say exactly what their future holds. Watch this space.