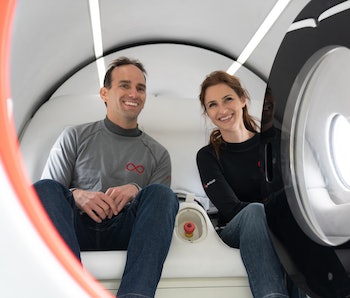 Virgin Hyperloop has made history.

On Sunday, November 8, the company sent two passengers on a short trip through its DevLoop test tube in the Nevada desert. Josh Giegel, co-founder and chief technology officer, was joined by Sara Luchian, director of passenger experience. Together, they are the first people to have ever publicly traveled on a hyperloop.

The trip only lasted a matter of seconds, reaching around 100 mph as it whizzed from one end of the 500-meter (1,640 feet) tube to the other. But the journey represents a massive milestone for the future of transportation.

The hyperloop is an entirely new form of transportation, first devised by tech entrepreneur Elon Musk in a white paper he released freely to the world in 2013. Musk's concept involved sending pods through vacuum-sealed tubes at speeds of up to 760 mph. A 380-mile trip between Los Angeles and San Francisco, the white paper claimed, would take around 35 minutes. Oh, and it would produce zero emissions.

Sunday's test is a step toward a vision once thought of as fanciful coming to fruition.

The run-up to today's test started over a year ago. The co-founder chose the internal codename "Pegasus" for the project, named after the Greek mythological horse that needed to be tamed in order for humans to ride.

The firm decided to look internally for the first two passengers. There were 40 applicants, whittled down to Luchian and Giegel. The pair wore regular, everyday clothes for the test — "we didn't want it to feel like you have to be a NASCAR driver or an astronaut," a company spokesperson tells Inverse.

The control team spent the past couple of months running tests without the participants, including dummy safety runs. Luchian and Giegel went through two weeks of training before the event, too, including one week of classroom work and another week of practical in-pod emergency training. On Saturday, November 7, the team went through final checks, while more staff arrived on site including company chairman Sultan Ahmed bin Sulayem. And on Sunday: The main event.

The two-seater pod that carried the pair is designated XP-2. It was designed by BIG, a design firm headed up by Danish architect Bjarke Ingels. The pod is a successor to the XP-1 pod that set Virgin Hyperloop's 240 mph speed record in December 2017.

Like the XP-1 speed record, XP-2 ran on the "DevLoop." This tube was completed in March 2017, at the time the first full-scale hyperloop track. It measures 500 meters (1,640 feet) long, 3.3 meters (10 feet 10 inches) in diameter, and weighs over two million pounds. It is kept at low pressure rather than a complete vacuum, described at the time of the XP-1 test as “depressurized down to the equivalent air pressure experienced at 200,000 feet above sea level.”

On hand at the event was Certifer, a third-party assessor from France. The assessor worked with internal safety teams to ensure the event went smoothly.

Thankfully, the event went off without a hitch. The pod accelerated for the first 300 meters, then slowed down for the final 200 meters.

Virgin Hyperloop isn't the only company taking on the challenge posed by Musk's 2013 paper. Others include Canada-based TransPod, which in January 2019 announced plans to build a 1.86-mile test track in France. Musk's own firm SpaceX has also hosted four hyperloop pod design competitions, the first in January 2017, on a straight track measuring around one mile long. These competitions have led to the birth of teams like Delft Hyperloop and TUM Hyperloop, the latter of which holds the public speed record of 288 mph, set in July 2017.

So why hasn't anyone reached anywhere near the full 700 mph? There is general agreement that track length is holding things back, and a longer track would enable a pod to reach full speed. Delft Hyperloop told Inverse in July 2018 that it would require 44 miles of track. But TUM Hyperloop said in August 2019 that it could be done in just nine miles.

The hyperloop is designed to transport people, and people don't take too well to such fast acceleration. TUM Hyperloop's pod accelerated at 2g in its record attempts. Nine miles of track could enable the pod to gently accelerate to full speed at just 0.3g — similar forces to a train or bus.

A full-scale hyperloop track could be built soon. Last month, Virgin Hyperloop announced that West Virginia would host a new Hyperloop Certification Center. And earlier this year the U.S. House of Representatives passed a bill to provide a regulatory framework for a hyperloop. The European Committee for Standardization has also formed a committee to decide on a European standard for the hyperloop.

Virgin's next steps are to build a six-mile-long track in West Virginia that can demonstrate to federal regulators that the system is ready for the big time. They'd need to show multiple pods, switching systems, and other safety demonstrations akin to that of a train.

Virgin's goal is to stress test the entire system by 2025, then have commercial operations for passengers and cargo in effect by the end of the decade. The final pods would hold around 20 people, each moving direct to a destination, with more pods at busier times to cope with demand.

Virgin Hyperloop's plan to build a route between Mumbai and Pune in India, for example, would move 200 million passengers per year at a rate of 16,000 people per hour of operation. At that speed, the world may feel that little bit smaller: During a 2017 press conference, the company (under its old name Hyperloop One) declared it could build a network to connect 80 percent of the United States population to one another in five hours or less.

If Virgin achieves its goals, then Giegel and Luchian's test could join the Wright brothers' 1903 airplane flights at Kitty Hawk as a defining moment in transportation history.

More like this
Innovation
Sep. 22, 2022
Trash can-sized robots could revolutionize how you travel — but there's a catch
By Molly Glick
Science
Oct. 1, 2022
Scientists may have already discovered a “miracle” fix for climate change
By Saul Griffith and The Reader
Innovation
Sep. 29, 2022
Scientists have created a mechanical womb that can grow life in the lab
By Miriam Fauzia
Related Tags
Share: