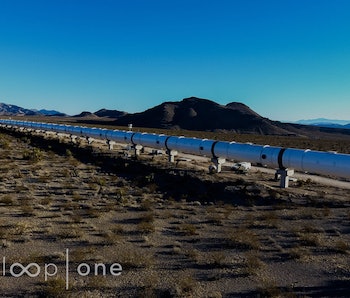 Hyperloop One has shared the first pictures of its test track in the Nevada desert. At the 11th Middle East Rail annual conference in Dubai on Tuesday, CEO Rob Lloyd revealed new images of the 500-meter (1,640-feet) “DevLoop,” the world’s first full-scale Hyperloop test site. The track brings Elon Musk’s design for a 700 mile-per-hour vacuum sealed train one step closer to reality.

“Hyperloop could further enable diversification and could make a huge impact on the region’s relatively young and growing population, reimagining how cities and countries in the region work together,” Shervin Pishevar, executive chairman and co-founder of Hyperloop One, said in a statement. “Progress made on the DevLoop in just five months demonstrates how quickly we could bring Hyperloop to the GCC [the six-country Gulf Cooperation Council] and to the world.”

Hyperloop One has been marketing the benefits of the high-speed rail system around the world. Last week, Lloyd appeared at a media event in Delhi, where he told attendees how Hyperloop could transform India. The company is currently holding a global design competition, the winners of which will receive a feasibility study. It announced 35 semifinalists in January, five from India, and plans to announce the group of finalists in May. None of the semifinalist designs cover the GCC, but on Tuesday, Lloyd was stressing the benefits that Hyperloop could bring to the region.

“Building a Hyperloop would vastly impact the economy and make any major city in the GCC accessible within one hour,” Lloyd said.

Five months ago, the DevLoop site was just empty land. Since then, a team of over 240 employees has worked to bring the track to life. The DevLoop, just 30 minutes outside of Las Vegas, measures 10.8 feet in diameter and weighs over two million pounds.

It’s a serious piece of kit, but Hyperloop One needs to ensure the test track is ready to impress. The company is planning to host a public trial in the first half of this year, just under a year since the company tested its propulsion system in front of a small audience.

This image gives you a better sense of the scale.

If Hyperloop One’s vision comes to life, it could spark the beginning of a revolution in transportation. The company has spoken before about self-driving cars that link up with the rail system to provide a seamless transport experience.

Years from now, we may look back on this patch of Nevada desert as the start of something phenomenal.

More like this
Innovation
Sep. 22, 2022
Trash can-sized robots could revolutionize how you travel — but there's a catch
By Molly Glick
Innovation
Sep. 15, 2022
This jet engine-powered EV revs up a wild 70-year-old idea
By Andrew Moseman
Innovation
20 hours ago
Scientists have created a mechanical womb that can grow life in the lab
By Miriam Fauzia
Share: