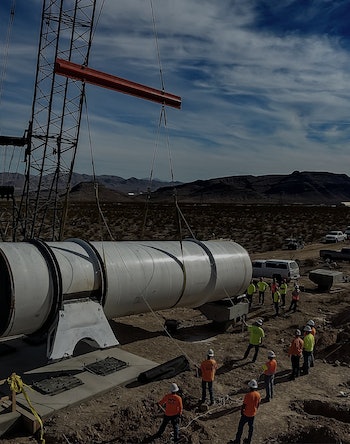 When you hear executives from Hyperloop One — gathered around a speaker phone from Las Vegas during this week’s CES — explain their vision for the futuristic transportation system, it’s easy to get excited. Imagine: coast-to-coast journeys made inside a few hours, or having delivered to your door a pair of custom sneakers that you designed and ordered that day.

Before that 700 mph broadband vision is realized, the first regional hyperloop — the tube-based transportation system originated by Elon Musk in 2013 — needs to be built. And that takes everyone involved, from government to business leaders, to get on board.

Another step toward actualizing the hyperloop was made on Friday, when 35 teams from regions all over the world were announced by the Los Angeles-based company as finalists in the “Hyperloop One Global Challenge.”

The open competition, announced by the company in May 2016, attracted 2,600 teams of engineers and urban planners who pitched their region as the ideal spot for a hyperloop. The 35 teams will present at three showcases across the globe — February 28 in New Delhi, India; April 6 in Washington, D.C.; and April 27 in London — to judges that will narrow the 35 to maybe a half-dozen or so.

“There doesn’t have to be one winner at each [showcase]; we actually want to be able to go forward with more than one,” Nick Earle, who oversees global field operations for Hyperloop One, tells Inverse. “There could well be multiple winners going forward. Right now, we’re keeping our options open.”

Also invited to those showcases will be government leaders, as a way to show them what hyperloop could do for their region. Earle says feedback from government (along with quality of the entry) will determine if Hyperloop One selects a region.

Some of the regions are as specific as a Boston to Somerset, Massachusetts, just a 50-mile trip. Others, like “US Midwest,” could include any number of routes. (The actual teams will be announced at the showcases this spring.)

The winning regions will get feasibility studies, which as any transportation nerd knows, are a crucial early step for any project. But Lloyd makes it clear that something had better come from those studies: “We’re not in the business of doing studies, we’re in the business of looking for hyperloops that can be built,” he says.

“We want to have three routes in production in the next five years,” he says later.

The end result is that one day, Hyperloop One systems will connect cities in a single region. Eventually, systems will connect — much like subway lines in cities — by linking together regions. While travel will be easier, shipping will be the thing that sees the most dramatic change.

“It’s Amazon Prime on steroids,” Earle says. “You don’t have to use a fleet of airplanes, you don’t have to use warehouses outside of cities to store goods, because you have to truck them in to meet that one hour deadline that’s in the contract for Amazon Prime.” He continues, “Autonomous cars will actually be able to go inside the Hyperloop. You actually can do door-to-door like never before.” The autonomous car idea was introduced when Hyperloop One announced its partnership with Dubai’s Road and Transport Authority to see if a hyperloop could be built in the Middle Eastern region.

Around April, Hyperloop One will conduct a full-scale test of its system at its North Las Vegas testing facility.

“It’s one thing for us to talk about building it, it’s something different for you to actually go build it,” Josh Giegel, President of Engineering for Hyperloop One, tells Inverse.

The full-scale test will occur about a year after it first tested its propulsion system (see above.) That test was publicized and the media was invited out to see what looked like a sled create a cloud of dust in the desert (Hyperloop One helpfully released this animated video to help us connect the dots).

The full-scale test of the hyperloop inside the 11-foot tube will also be very public.

“For us, taking this concept and actually building it, and testing it, and showing people — allowing them to see it, to touch it, to smell it if they want — is really, really important,” Giegel explains. “We’ve felt that way for a long time, that it’s one thing for us to talk about building it; it’s something different for you to actually go build it.”

Incoming U.S. President Donald Trump has made infrastructure projects a big part of his economic plan, which could translate to a friendlier government for Hyperloop One. In the weeks after the election, Lloyd said he was hopeful for a Trump administration, but said Hyperloop One had not reached out to the transition team about its projects.

“Our instincts are that the work that we’re doing is going to be extremely well received when the people get into place,” Lloyd said Friday, before predicting this: “I think we’re going to be a very, very important part of the next three or four years in terms of the potential infrastructure that U.S. looks at.”

As for Musk, who will always be remembered as the father of the hyperloop, he made another visit to Trump Tower on Friday and has already been appointed to a Trump policy forum.

But with the full-scale test, Hyperloop One just might move out of Musk’s considerable shadow completely, but as Giegel puts it: “I think he’ll always have a big part of it.”

“We’ll forever be indebted to him for giving us kind of the idea, but we definitely changed the technology quite a bit from the original white paper,” Giegel says. “It’s more than just a train, or a pod in a tube. We’re taking it to a level of connectivity and really being the high-speed backbone of the future transportation network.”