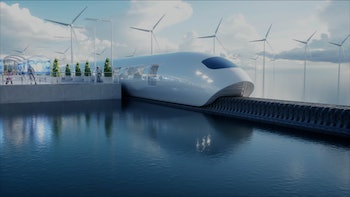 Elon Musk's ultrafast, vacuum-sealed hyperloop has seemed like a (literal) pipe dream for years, but new legislation on its way to the U.S. Senate could finally pave a path forward for this futuristic transport system.

What's the news — Virgin Hyperloop, the team behind Musk's hyperloop dream, announced on Tuesday its inclusion in a future of transportation act that has just passed the U.S. House of Representatives. This Move Forward Act, if passed by the Senate, would assign the Non-Traditional and Emerging Transportation Technology (NETT) Council to provide guidance and a regulatory framework over the next six months to finally get the hyperloop off the ground.

CEO of Virgin Hyperloop, Jay Walder, said in a statement that the hyperloop's inclusion in this act is a monumental moment for the company.

“The inclusion of hyperloop transportation in this legislation is historic and once again establishes the US as an innovation leader, giving us an opportunity not just to rebuild but evolve using transformative and innovative technologies,” said Walder.

Prior to this act being passed by the House, Virgin Hyperloop had already been in talks with the NETT council over last year and a half to ensure the hyperloop is deployed quickly and safely in years to come.

What does the act say — As for the Move Forward Act itself, the legislation is a massive 2,309-page document that touches on everything from Amtrak reforms to school bus regulations -- and of course "emerging technologies," which the hyperloop falls under. This section also includes information on the regulation of automated vehicles and intelligent transportation systems (e.g. self-driving cars.)

Under the hyperloop section, the act lays out the council will work with the hyperloop team to establish a regulatory framework that encompasses "safety, oversight, environmental [impact], [and] project delivery."

What the big deal — While many companies may balk at having regulatory frameworks impinged on them, for a company like Virgin Hyperloop that plans to create a new paradigm of transportation, receiving regulation through the United States Department of Transportation (which oversees NETT) can be seen as an important validation of the technology and proof that it isn't just a spark in the pan.

Previous progress — This move is historic for the United States, but that doesn't mean its necessarily the first time the hyperloop has received similar legitimization. In February, the European Committee for Standardization announced similar plans to form an overseeing committee for "hyperloop systems standardization."

Just as this opened up the potential for cross-continental hyperloop construction in Europe, a similar paradigm shift could be coming to the U.S.

What it means for actually building the hyperloop — With all this new legislation underway, does that mean that hyperloop construction will be starting across the U.S. in time for holiday travel? Definitely not. These legal frameworks will be important to the eventual success of the hyperloop, but the current technology behind this vacuum-sealed transit system is not yet up to par.

Currently, the hyperloop and its transportation pods are being collaboratively designed through competitions held by Musk. The first four of these tests used .8-mile-long, straight tubes to test pod designs. In an upcoming fifth competition announced in July, Musk says that stakes will be raised even higher -- to a 6.2-mile-long track with at least one turn. However, in light of Covid-19 safety concerns, a date for this new test has yet to be announced.