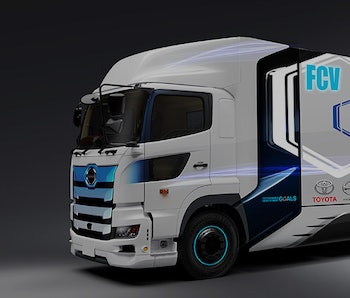 Toyota announced on Monday it is developing a heavy-duty hydrogen fuel cell truck with its subsidiary Hino Motors. It will be based on the Hino Profia, a heavy duty cab-over truck that the company has been producing for decades. With its investment, Toyota might answer the question that the entire industry wants to know: can hydrogen fuel cell vehicles compete with electric vehicles?

"Toyota and Hino are determined to take proactive action toward resolving global environmental issues as one of the most important corporate tasks. The two companies have declared ambitious goals to reduce CO2 emissions by 2050 and are developing electric vehicle technologies for widespread use in society," the company wrote in a press release. "In order to achieve further reductions in CO2 emissions, major improvements will be required in the environmental performance of heavy-duty trucks, which account for about 60 percent of the total CO2 emissions from commercial vehicles in Japan."

Back in 2015, Toyota announced it was beginning something called the "Toyota Environmental Challenge 2050." The goal of this challenge is to make the company more sustainable, including by cutting the amount of CO2 emitted from its new vehicles by 90 percent by 2050 compared to its 2010 levels. The challenge also includes efforts to directly contribute to environmental restoration projects.

Toyota says the new truck will have "two Toyota fuel cell stacks that have been newly developed for Toyota's next Mirai." Toyota has been a leader in the hydrogen fuel cell world for years, and it looks like the company is still very much committed to this technology. Toyota may be all-in on hydrogen, but many believe electric vehicles are the way of the future.

"Hydrogen is an energy storage mechanism. It is not a source of energy. So you have to get that hydrogen from somewhere. if you get that hydrogen from water, so you’re splitting H20, electrolysis is extremely inefficient as an energy process," Musk said. "If you say took a solar panel and use the energy from that to just charge a battery pack directly, compared to try to split water, take the hydrogen, dump the oxygen, compress the hydrogen to an extremely high pressure (or liquefy it) and then put it in a car and run a fuel-cell, it is about half the efficiency, it’s terrible. Why would you do that? It makes no sense."

See also: Scientists developed a new way to get hydrogen from seawater

Though Musk is right about efficiency, it's clear companies like Toyota are working hard to make their hydrogen fuel cell vehicles as efficient as possible. Toyota isn't along in working on this problem. A group of researchers from New York University released a study in January that showed how you could use ion-conducting copolymers to increase the amount of power you get out of a hydrogen fuel cell battery.

As hydrogen fuel cell technology improves, it may be a serious competitor for companies like Tesla that are sticking with the electric car battery. For now, it seems like electric vehicles still have the edge.

There's a joke that hydrogen is the future and always will be, and it feels like it's still relevant. Hydrogen has been an exciting fuel source, in theory, for a long time, but it looks like we're finally getting closer to a point where it will actually efficient enough to be a useful fuel source. Elon Musk was right to criticize it when he did, but it seems there is a future for hydrogen.