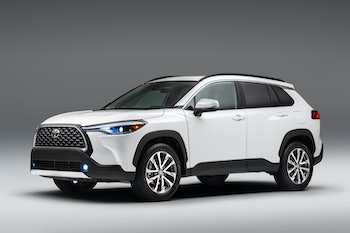 The Toyota Corolla is one of the best-selling vehicles of all time, but apparently, that’s not enough. So Toyota is building a crossover of the venerable Corolla, something that’s sure to result in lots more sales — and maybe even outsell the original sedan.

The Toyota Corolla Cross comes in a number of different flavors, including front- and all-wheel drive, hybrid (starting in 2023), and traditional gas-powered variants. It might not be the most exciting new vehicle for2022, but it’s the one you’re most likely to buy.

Here’s everything you need to know about the Toyota Corolla Cross, from towing specs to price and fuel economy.

This story is developing and this report will be updated as more information becomes available.

The 2022 Toyota Corolla Cross uses regular 87-octane unleaded fuel and has a number of different fuel economy ratings depending on which powertrain you get:

The front-wheel-drive Corolla Cross gets an EPA-estimated 31/33/32 mpg city/highway/combined.

A hybrid drivetrain option is coming for 2023.

The Corolla Cross sports a two-liter four-cylinder engine making 169 horsepower and 150 lb-ft of torque. That’s adequate for a smaller crossover like this, but don’t expect to be winning any drag races.

The Cross uses a CVT or continuously variable transmission, which is becoming more common in mainstream cars like this. Instead of having a gearbox with different fixed gears (and a lot of moving parts), a CVT can adjust to provide any gear ratio (within design limitations) to optimize engine efficiency.

They’re frequently criticized for being less fun to drive than more traditional transmissions, but for Corolla Cross owners this likely won’t be an issue.

What’s the Toyota Corolla Cross 0 to 60 time and towing capabilities?

The Toyota Corolla Cross will be capable of towing up to 1,500 pounds, which is sufficient to pull a small U-Haul trailer (or small camper, or anything else you might consider towing with a small crossover like this).

Is the Toyota Corolla Cross self-driving?

No, but it does come with Toyota’s full safety suite, including a standard blind-spot monitor, rear cross-traffic alert on LE and XLE trims, and front and rear parking assist with automatic braking on XLE. That last feature will automatically apply the brakes if you’re about to back into something.

Toyota includes a lot of other safety features as standard across all vehicles, including full-speed radar cruise control and automatic high beams. Those are both nice quality-of-life improvements for the driver.

What warranty comes with the Toyota Corolla Cross?

How can I buy the Toyota Corolla Cross?

The Toyota Corolla Cross can be purchased or ordered from your local Toyota dealer.

This story is developing and this report will be updated as more information becomes available.

This article was originally published on Aug. 2, 2021