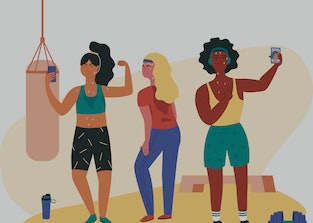 Your next fitness wearable could be sweat-powered

If you workout without your smart wearable, did you even exercise at all?

Collecting data about our health has become an essential part of many people's workouts, but remembering to charge your Fitbit or clunky Apple Watch strap can be a pain. Instead, researchers have developed a new, super light and flexible wearable that's powered by sweat.

This electronic skin (or, e-skin) looks similar to a nicotine patch and can be placed anywhere on a person's sweaty body to begin decoding chemical information about their workout, including skin temperature, pH, and glucose levels. This information can be wirelessly transmitted to users' devices to help them keep track of this incredibly precise health data. And, in addition to being a powerful tool for personal health monitoring, researchers say that strain sensors compatible with their e-skin can also be used to wirelessly transmit motion commands to a users' prosthetic, creating a more effective and intuitive human-machine interface.

In a study published Wednesday in the journal Science Robotics, a team of Caltech engineers write that what sets their e-skin patch apart from previous designs are sweat-munching enzymes in the patch which allow it to break free from traditional battery-powered models.

"Batteries have been used as the primary power source of the majority of wireless e-skin systems," write the authors. "[But] existing ones suffer from inadequate long-term continuous usability, especially when electricity is not readily available. [And other] soft e-skins that can directly harvest energy from other accessible sources— including human motion, body heat, and solar light—are limited by their low-power density. [Instead, using] human biofluids, such as human sweat, could serve as an ideal and sustainable bioenergy source for powering future e-skin devices. Moreover, they contain a wealth of chemicals that can reflect an individual’s health status."

To test these sweat-powered patches in action, the researchers enlisted the help of a sweaty group of humans on stationary bikes at Caltech. During their exercise, the device monitored the riders' glucose levels, skin temperature, pH and urea and wirelessly transmitted the data to a remote device. The researchers observed that the patches were able to stably transmit this data for up to 60 continuous hours.

In addition to the stationary bike trials, the researchers also investigated how using the patch along with strain sensors might help improve the mobility of prosthetic users. In these trials, in addition to an e-skin patch attached to their forearm, participants also had two strain sensors attached to their hand and elbow. In the first trial, data were collected from these sensors when participants moved their arms and was then wirelessly transmitted to robotic prosthetics near-by that mimicked that motion in real-time.

In their second prosthetics trial, the researchers showed that this technique was effective for not only remote prosthetics but wearable prosthetics as well and demonstrated how it could help a user control a prosthetic leg to walk across a room.

As the sophistication of this patch's sensors continue to improve, the authors say that it could be used to create more personalized control of prosthetics for users.

"[It can] bring the human into the loop of prosthesis control to enable real-time user-specific responses to human intent and behavior," write the authors.

While this kind of smart health patch isn't quite ready to come to a store near you, the authors say that they hope to continue improving this device my adding more sensors that could detect other useful health signals, such as a heartbeat.

"The development of such a multimodal, fully integrated, and self-powered platform enriches the functionalities and potentials of e-skins and opens the door to numerous robotic and wearable healthcare possibilities, such as personalized medicine."

Abstract: Existing electronic skin (e-skin) sensing platforms are equipped to monitor physical parameters using power from batteries or near-field communication. For e-skins to be applied in the next generation of robotics and medical devices, they must operate wirelessly and be self-powered. However, despite recent efforts to harvest energy from the human body, self-powered e-skin with the ability to perform biosensing with Bluetooth communication are limited because of lack of a continuous energy source and limited power efficiency. Here, we report a flexible and fully perspiration-powered integrated electronic skin (PPES) for multiplexed metabolic sensing in situ. The battery-free e-skin contains multimodal sensors and highly efficient lactate biofuel cells that use a unique integration of zero- to three-dimensional nanomaterials to achieve high power intensity and long-term stability. The PPES delivered a record-breaking power density of 3.5 milliwatt·centimeter−2 for biofuel cells in untreated human body fluids (human sweat) and displayed a very stable performance during a 60-hour continuous operation. It selectively monitored key metabolic analytes (e.g., urea, NH4+, glucose, and pH) and the skin temperature during prolonged physical activities and wirelessly transmitted the data to the user interface using Bluetooth. The PPES was also able to monitor muscle contraction and work as a human-machine interface for human-prosthesis walking.