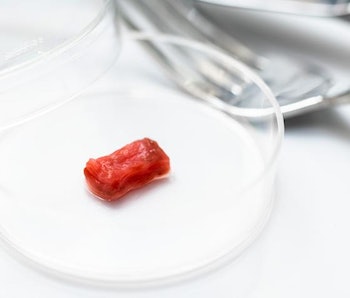 Do you take your lab-grown steak medium-rare or well-done?

This is the kind of question scientists behind a new study hope waiters around the world will be asking of their artificial steak.

Using regenerative science taken straight from drug development and the harm-free collection of bovine tissue cells, scientists in Japan report their new steak not only has a similar texture to a real beef steak but can stay bacteria-free for a much longer period of time — helping potentially cut down on food waste.

The only catch? The steak isn't edible.

Why it matters — While the final form of this artificial steak (and its ultimate reception from the meat-eating and non-meat eating communities alike) is still in flux, lab-grown meat stands to plug a hole in global food demand that plant-based alternatives like Beyond Beef might simply fail to satisfy.

Artificial steak and other meat products stand to not only lessen the ethical concerns of meat production but to lessen the environmental effects as well. Lab-grown means much lower water usage than traditional cattle farming.

The research was published Monday in the journal Science of Food.

Here's the background — With over a decade of innovative meat alternatives under our belt (Beyond Meat is celebrating its 12th birthday this year) the idea of a plant-based or even lab-grown meat alternative is far from revolutionary.

But despite all the recent efforts being made in this space, the researchers behind this new work say that there are still some hurdles left to overcome. For example: Developing lab-grown meat capable of standing up to a juicy, 8oz steak instead of being relegated to the ground-beef section.

"As the bovine cultured muscle tissues constructed using these [previous] methods are small in size, these tissues can [only] be used as cultured minced meat," write the authors, explaining the shortcomings of previous research attempts.

To truly satisfy the demand of a global population that might not accept plant-based or hamburger-based alternatives, the authors write that large cultured meat will also be "required to satisfy global dietary diversity."

What they did — To achieve the kind of sumptuous mouthfeel that steak-fanatics might be missing, the team turned to a type of regenerative tissue development used in drug discovery.

Essentially, they collected bovine tissue samples via biopsies (the kind of tiny cut a doctor might make to suspicious mole to check for cancerous cells) and developed a Jenga-like scaffold to grow the tissue on.

By applying gentle electric shocks, as would be done in other tissue scaffolding work, the team was able to stimulate maturity and integration of the bovine tissue cells into one sinewy hunk.

To give their lab-meat a more natural hue, they injected it with red dye. Overall, it took 14 days for the lab-grown meat to reach maturity.

What they discovered — To see how their lab-meat would compare to the real deal in terms of texture, the team performed a "breaking force" analysis between one lab meat sample and a natural meat sample after heating both for 1-hour in 158 degrees Fahrenheit water.

The lab-grown sample also took on a freezer burnt, deep red color whereas the natural beef looked more like a piece of meat you might pull from a stew.

And there's a good reason for that: Right now, write the authors, their meat is not edible, due in large part to the artificial materials (like hydrogels) holding the tissue sample together.

That said, it does have at least one advantage, write the scientists: superior microbial resistance.

"[T]he microbial content of the cultured millimeter-thick bovine muscle tissue was below the detection limit, showing that microbial contamination was lower than that in commercial beef tenderloin," write the authors.

"The sterility of the cultured tissue will promote its use as safe steak meat with long shelf life and reduce food loss."

What's next — Several big hurdles lie in the way of this meat reaching primetime, in particular the fact that it can't currently be classified as edible food.

Edible alternatives don't yet exist for materials like hydrogels, but the researchers expect discovering one in the future could help their meat rise from obscurity. They're also hopeful that adding key nutrients to these samples, similar to those used in plant-based products, will be a much simpler problem.

"[T]he proposed construction method for bovine muscle tissue of appropriate maturity and stiffness will be useful for the production of cultured steak meat of high bioethics without imposing a new burden on the livestock industry," write the authors.

More like this
Innovation
6.27.2022 8:00 PM
Artificial photosynthesis can grow plants without light — and may solve a planetary dilemma
By Steph Lee
Mind and Body
7.2.2022 3:00 PM
Why does spicy food make you sweat? A neuroscientist breaks it down
By Elana Spivack
Science
6.30.2022 10:30 AM
Look: 10 jaw-dropping images reveal nature running wild in cities
By Jennifer Walter
Related Tags
Share: