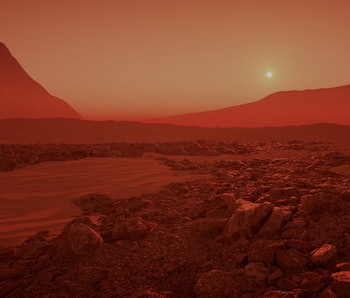 Mars has been the focus of both scientific and creative endeavors for well over a century. From Edgar Rice Burroughs writing A Princess of Mars in 1912 to NASA launching the Mars Opportunity rover in 2003, humans have had an eye on the Red Planet for any number of reasons. But as fascinating as researching other worlds is, underlying everything in the study of Mars is one key hope: the discovery of life.

It's a surprisingly sturdy dream. Inverse predicts that in the 2020s, the search for life on Mars will cast on a shadow on every study of the planet that's made.

There will be many options to choose from. Chief among these is the still-unnamed Mars 2020 Rover, which was assigned its "driver's license" late last year. According to NASA, life is a chief priority for the car-sized rover. "The Mars 2020 mission addresses high-priority science goals for Mars exploration, including key questions about the potential for life on Mars. The mission takes the next step by not only seeking signs of habitable conditions on Mars in the ancient past, but also searching for signs of past microbial life itself," the space agency says on its website.

It plans to explore the planet's potential for microbial life through a drill which will be able to core samples of rocks, which it will then store on the Martian surface. These won't just be any rocks, mind you: NASA will be targeting rocks that were clearly once affected by the Red Planet's water supply, now long gone but once plentiful. These rocks might be smoother than others on the desolate Martian surface, similar to the iron-rich rocks known as "blueberries" that NASA has found in the past.

From there, after the robot has drilled around 2 inches into its samples, it will place each of them in their own sealed tube. After all of that, which NASA refers to as “depot caching,” another waiting game begins. The samples will stay on the surface until another explorer, either robot or human, picks up and can study them with the level of detail needed.

It’s going to be a long, expensive process, with zero guarantees. But the chance for life, ancient or otherwise, is a draw like few other things in the solar system. Finding confirmation that single-celled microbial life once existed millions of years ago on Mars would radically change humanity’s entire perception of the universe. While some will be looking at space with dollar signs over the next decade, the scientific hunt will remain at the forefront of exploration.

As 2019 draws to a close, Inverse is looking to the future. These are our 20 predictions for science and technology for the 2020s. Some are terrifying, some are fascinating, and others we can barely wait for. This has been #6. Read a related story here.