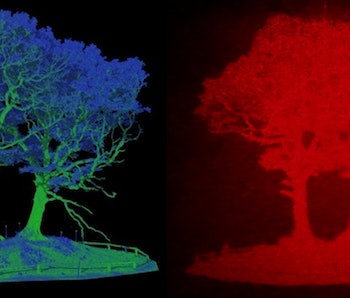 Helmet-mounted head-up displays are standard issue for F-35 fighter jet pilots. They help aviators keep an eye on the enemy and essential flight data simultaneously, even as pilots look every which way, including up.

Head-up displays have been incorporated into many top-of-the-line vehicles, but they still suffer from a few problems, including the possibility that their placement on the dash cluster can be distracting to drivers due to the need to look down, and not giving a holistic view of obstacles the car might encounter.

But researchers at the University of Cambridge want to change all that... with lasers.

In a new study published in late-April in Optics Express, researchers revealed a new laser-based, holographic head-up display for cars that could make driving significantly safer. It would allow drivers to use augmented reality to see anything from their current speed or where the next turn is to safety-critical items like where pedestrians or street signs are even when blocked from view.

What’s new — The head-up display uses a helium-neon laser at 633nm to project a 4K hologram onto the surface of the driver’s eyeball. With that hologram, the study team can render a wide variety of graphics or other images as if they were floating in space in front of the driver.

Jana Skirnewskaja is the study’s lead author and a Ph.D. student at the University of Cambridge.

“It's a real head-up display without virtual reality glasses,” Skirnewskaja tells Inverse. The system displays a 3840 x 2160 resolution — the same as a 4K television — and 256 shades of grey. Or, actually, shades of red because that’s the color of the laser.

But the real trick is that the objects have depth. “The hologram is why it gives such intense depth perception,” she explains. The objects are floating in the field of view, not distracting the driver, but helping to enhance the world. “We can create up to 10 layers and project ten different arrows, traffic signs, anything that is an obstacle.”

Here’s the background — Head-up displays helpful in cars like the Tesla Model 3 for the same reasons as in combat: they allow the driver to keep their eyes on the road for more of the time. In vehicles equipped with the tech, drivers can glance just below the horizon — basically at the road just in front of the hood — to see information like current speed or turn-by-turn directions floating in mid-air. Theoretically, this is better than looking all the way down on the dash cluster.

The difference might seem subtle, but if that momentary glance downward (which we do constantly when driving) is at the wrong time, it can have disastrous results. Still, current head-up displays are limited in where they display information because they usually work by reflecting a screen mounted in the dash onto the windscreen in the driver’s line of sight.

This new system changes that by using the kinds of futuristic UIs more associated with sci-fi than Scions.

How it works — The system projects laser light directly into the pupil of the driver, using the eye’s own lens to align the hologram in the driver’s line of sight. “we don't want to overload the driver with unnecessary objects,” Skirnewskaja says, but instead “to alert the driver to what is not perceived.”

By aligning 3D objects with appropriate depth perception, the system could be paired with a LIDAR sensor mounted on the car to give the driver an augmented reality view of the way forward.

“We have LIDAR information, so we don't just have static objects,” like the current speed or radio station floating in view, she explains. “When a driver doesn't have full visibility at night, we can scan with LIDAR.” It should be theoretically possible to display the current location of live objects like pedestrians or even other vehicles as if they were visible to the driver.

And on top of that, “anything static can be shown on the road,” says Skirnewskaja. With vehicle-to-everything communications technology, the system could show the real-time location of approaching emergency vehicles. The actual location of black ice or potholes could make an appearance, too. The trick is getting all the data, but that’s a problem for another day.

What's next — All the equipment to make an automotive-capable holographic projector already exists. The problem, as ever, is economical. The current projector costs $20,000 per unit, and that price doesn’t include all the computational horsepower and connectivity to generate all the stuff you might want to display.

“An industrial partner would be useful to market it with,” she says. “But, I think just the technological aspect and implementing that into a car we can already do.”

There’s work to do on projecting live data through the hologram as well. In the study, the team used LIDAR data to show a 3D rendering of a London street. Projecting a live rendering of moving objects is the next step.

“How to fit it into the car, how to not distract the driver, and also to show color in the field of view—that would be the ultimate goal for us,” says Skirnewskaja. “Then to commercialize is the real challenge.”

Perhaps, the real trick will be developing and commercializing this tech before autonomous cars make manual driving obsolete.

Abstract: A holographic automotive head-up display was developed to project 2D and 3D ultra-high definition (UHD) images using LiDAR data in the driver’s field of view. The LiDAR data was collected with a 3D terrestrial laser scanner and was converted to computer-generated holograms (CGHs). The reconstructions were obtained with a HeNe laser and a UHD spatial light modulator with a panel resolution of 3840x2160 px for replay field projections. By decreasing the focal distance of the CGHs, the zero-order spot was diused into the holographic replay field image. 3D holograms were observed floating as a ghost image at a variable focal distance with a digital Fresnel lens into the CGH and a concave lens.

If you liked this, you’ll love my weekly car review newsletter PRNDL. Click here to subscribe for free on Substack. I’ll even answer your new car questions!