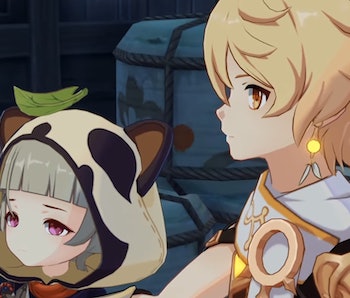 The Irodori Festival stands out as the grandest event of Genshin Impact 2.6 with a multitude of quests, rewards, and endearing character interactions for fans to enjoy. This festival of the arts celebrates the five Kasen, legendary poets of Inazuma’s past. However, Yae Miko has reinvented it to be a more modern international festival where foreign cultures — including Mondstadt snd Liyue — clash. It’s currently underway with one quest involving a sleaze named Seigou, which has stumped players with its bartering mini-game. After all, who wants to pay more than they need to?

Here’s the true bartering price you need to give Seigou to complete the quest and lose as little money as possible.

How to barter with Seigou

Travelers barter with Seigou during the Irodori Anecdote event quest, “Buyer's Guide to the Statue of Her Excellency, the Almighty Narukami Ogosho, God of Thunder.” It’s available for players who have completed the third act under the Legends of Kasen questline. The grand prize is an adorable doll of Raiden Shogun, which is also the crux of the issue.

Sayu is tasked with buying Raiden Shogun doll for Kujou Sara, who can’t buy it herself because of her working hours. However, she falls asleep and the dolls sell out before she can buy one. This unfortunate incident jump-starts a chain of events where the Traveler, Paimon, and Sayu investigate a man called Seigou, who has been hoarding the dolls to resell at a higher value.

Most of the quest is self-explanatory as you simply travel to the locations asked of you. However, when it’s time to stall Seigou, players aren’t sure what to think of his unsavory prices. He offers the player a range between 120,000 and 180,000 Mora for a doll.

You’re forced to pick a price to fake a believable transaction with Seigou. The Traveler, Paimon, and Sayu are all aware that the ending price is offensively inflated but need to keep negotiating until Sara and her backup come to apprehend Junpei.

It might be tempting to go as low as possible, but anything lower than a 15 percent discount is already too low. Many players have reported that 150,000 Mora or higher is the way to go. Those who pitched prices below 141,000 were met with an angry reply from Seigou, saying, “At that price, why don't you just ask me to give it to you for free!?” It’s a bit of a bummer to negotiate that number but necessary to proceed. Thankfully, Sara and her men show up to arrest Junpei and bust the deal.

Players receive one of the coveted Raiden Shogun dolls as a reward for completing the quest. You also get 40 Primogems, 2 Hero’s Wit, and 20,000 Mora to sweeten the package.

Genshin Impact is available for PC, PlayStation 4, PlayStation 5, and iOS and Android devices. The Irodori Festival, also known as the “Hues of the Violet Garden” Event, ends on April 25. Be sure to complete the quests in time to receive as many rewards as possible and claim your free Xingqiu.