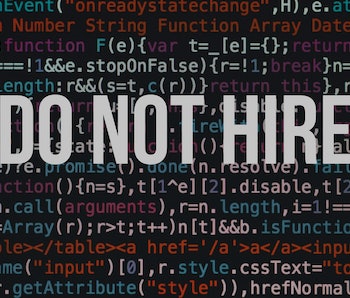 Are you ready to be interviewed by a robot? Well, you better get ready. Artificial intelligence just started being used for job interviews for the first time in England, and it may only a matter of time before this becomes common practice in the United States.

The major consumer goods company Unilever and other companies are now using artificial intelligence designed by an American company called HireVue to assist with with interviews in England. Here’s how it works, according to HireVue: The interviewee uses their phone or laptop to answer a set of predetermined questions, and the AI analyzes their voice, body language, facial expressions and more to determine if the person is a good candidate for the job. This AI was created by analyzing over 25,000 videos of job interviews.

A 2018 HireVue video — watch it below — promises its technology can “reduce unconscious bias and promote diversity” in the workplace.

The AI ranks each interviewee on a scale of 1 to 100, and it does this by comparing them to previous candidates who have excelled in their respective jobs. It also analyzes what their facial expressions and tone of voice imply about their personality.

HireVue Chief Psychologist Nathan Mondragon told The Telegraph that analyzing these things can tell you a lot about someone.

“Facial expressions indicate certain emotions, behaviours and personality traits,” Mondragon said. “We get about 25,000 data points from 15 minutes of video per candidate. The text, the audio and the video come together to give us a very clear analysis and rich data set of how someone is responding, the emotions and cognitions they go through.”

See also: Artificial Intelligence Will Show Us Our True Selves

HireVue isn’t alone in this arena. The companies AllyO and VCV.AI are also working on bringing artificial intelligence to the hiring process. American companies like Citibank and Mars are already working toward adopting this kind of technology. Hilton and Allstate are reportedly already using AI in the hiring process.

This technology has been called “dehumanizing,” and worries it could be biased to choose white men for jobs will have to be addressed. AI is often trained mostly using white male faces, since it’s often developed by white men, so it may misread females faces and the faces of people of color.

Getting interviewed by a robot doesn’t sound very fun, and there are definitely concerning outcomes that could come with using this kind of artificial intelligence, but it looks like this type of AI is probably going to become commonly used all over the world.

More like this
Innovation
8.15.2022 8:30 PM
This high-tech camera may help protect our identities — here's how it works
By Molly Glick
Innovation
8.11.2022 11:00 AM
“Quantum materials” could give the human brain a run for its money, scientists say
By Nathaniel Scharping
Innovation
8.15.2022 1:33 AM
47 popular home upgrades people are making that are under $35 on Amazon
By Christina X. Wood
Related Tags
Share: