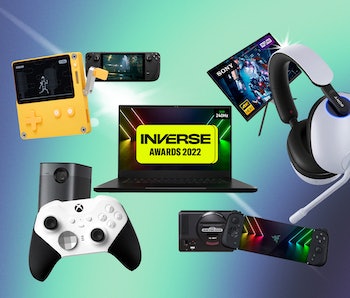 Dewey Saunders/Inverse
We may receive a portion of sales if you purchase a product through a link in this article.
Inverse Staff
Dec. 13, 2022

Years with new console launches are always the most exciting for gamers. There’s so much hype and spectacle to take in at the time. But the years after a release can be just as momentous. Distanced from the newness of shiny hardware with time, the must-play games and gaming gear start to roll in and showcase the medium to its fullest.

The world of gaming hardware is expansive (everyone has their go-to mechanical keyboard or controller), and this year didn’t have any significant console launches from the big three — Sony’s PlayStation 5 and Microsoft’s Xbox Series S/X made their debuts two years ago, and Nintendo didn't upgrade the OLED Switch. But alongside the massive game releases like Elden Ring, Horizon Forbidden West, and Pokémon Legends: Arceus and Scarlet and Violet, this is the best gear that stood out and kept us gaming.

The massive success of the Nintendo Switch proves one thing: People want to play AAA console games on the go. With the Steam Deck, Valve took the trend further by giving fans a handheld to play PC games sold via Steam wherever they want. Unsurprisingly, the Steam Deck is a major hit despite its gargantuan size — even for a handheld. The ability to play PC games — whether on the go or docked to a monitor or TV with a gamepad or keyboard and mouse — made PC gaming more accessible than any gaming laptop. It also helps that the Steam Deck starts at a very reasonable $399.

The handheld computer to buy if you want to play PC games on the go, whether they work with a mouse and keyboard or controller.

Everything about Panic’s Playdate is different — and refreshing. From the bright yellow case to the 1-bit black-and-white screen to the hand crank on the side, the Playdate aims more for novelty than bleeding edge. Even the way games are delivered — in weekly “season” drops — is untraditional. Playdate games may not have the most realistic graphics powered by a beefy CPU and GPU, but they have immense charm.

An indie handheld video game console, inspired by Nintendo, with a “season” of games you can literally crank your way through.

Nobody wants to pack a bulky Nintendo Switch Dock in their bag so they can game on their hotel TV. Fortunately, Genki, the maker of the Shadowcast adapter, introduced the Covert Dock Mini. Nearly 22 times smaller than Nintendo’s official Switch dock, the Covert Dock Mini is the solution that Nintendo should have made. The power adapter is tiny, plugs directly into an outlet, and has ports for HDMI and USB-C. There’s no other travel-sized dock for the Nintendo Switch like it.

This ridiculously tiny Nintendo Switch dock is the size of a phone charger.

Expanding PlayStation to PC, Sony made the big move of launching its Inzone gaming brand in the middle of 2022. Headlining Inzone’s debut were a trio of gaming headphones — the H3, H7, and H9. The latter Inzone H9 was the showstopper, though. Based on Sony’s excellent WH-1000XM5 over-ear active noise cancellation headphones, the H9 wireless headphones balance style, comfort, and sound quality. Premium features like the ability to switch between voice chat, calls, and music, as well as support for the PS5’s Tempest 3D Audio, quickly earned it the designation of gaming headphones of the year for us.

This wireless headset has "soft fit leather" for the earcups and headband padding.

iPhone controller accessories are a dime a dozen, but the Backbone One broke through last year as one of the biggest sleeper hits. Building on that momentum, Backbone released a PlayStation Edition of the Backbone One, complete with a white and black aesthetic that matches the PS5’s DualSense and PlayStation face buttons. Though it’s designed to match PlayStation hardware, the BackBone One also works with Xbox Cloud Gaming, Mac or PC (GeForce Now and Steam Link), and iPhone games via the App Store.

The Backbone is an excellent marriage of hardware and software and feels like the missing piece of the puzzle to gaming on an iPhone.

The Kishi V2 features a solid, more secure bridge, but keeps most of the design elements from the first version.

It’s hard not to trip over a gaming monitor with a nice, high-resolution, high-refresh-rate panel these days. But of the many released in 2022, Sony’s 27-inch Inzone M9 won our hearts. With 4K resolution, a 144Hz refresh rate, and a full array local dimming feature that can reach up to 600 nits of peak brightness, Sony’s first gaming monitor doesn't disappoint. While made for PC gaming, special features created for PS5 push it over the top. Similarly, Sony’s Inzone M3 (1080p, 240Hz) impressed too.

The Inzone M9 has 4K resolution and can reach 600 nits of peak brightness.

If a 27-incher like the Inzone M9 doesn’t cut it, this 32-inch Ben 4K HDR gaming monitor with 144Hz will. This one comes recommended by Inverse associate gaming editor Corey Plante, who praises its “truly excellent” HDR contrast made possible with BenQ’s HDRi display technology, an auto-brightness adjustment that adapts to a room’s lighting, and its wide range of articulation. Additionally, the EX310U's 2.1 channel speakers provide plenty of oomph to complement the terrific display experience.

It’s 2022, and most gaming laptops still look like a Lamborghini with underglow. Though Razer is guilty of overusing RGBs in its gaming products, the Razer Blade 15 thankfully straddles the line between gaming and productivity laptop. Its minimalist aluminum chassis provides an understated aesthetic, while its powerful Nvidia GeForce GTX 360 GPU (configurable up to an RTX 3080 Ti) enables high-performance gaming. The Blade 15 also isn’t lacking ports with Thunderbolt 4, USB 3.2, HDMI, and an SD card reader. And, of course, it has a programmable RGB keyboard.

The new Razer Blade 15 provides game-changing visuals and performance that’s brought to life with a choice of 3 next-gen displays—360Hz, 4K, or 240Hz QHD for the best of both worlds.

Though the XGIMI Halo+ isn't made specifically for gaming, its marriage of portability, 900 ANSI lumens for a bright picture, and fantastic-sounding Harman Kardon speakers mean this mobile projector can handle the task without issue. Whether you’re using it indoors or outdoors, some of our editors don’t think there’s a better 1080p portable projector.

There’s no shortage of ways to play retro Sega games. However, the Sega Genesis Mini 2 makes doing so dead simple — and in a nostalgic design to boot. The mini console has 60 games, including classics like Sonic 3D Blast, Phantasy Star 2, Streets of Rage 3, and Shining Force 3. If you own the previous Sega Genesis Mini released in 2009, the six-button controller works with the Genesis Mini 2.

Feeling nostalgic? You're in luck because the SEGA Genesis Mini is back!