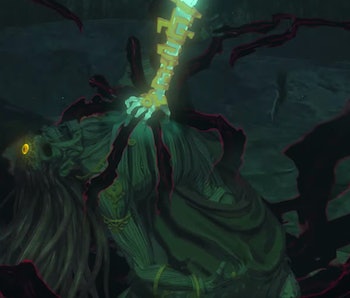 The Legend of Zelda: Breath of the Wild 2 was absent from yet another Nintendo showcase in late August, so those of us looking forward to the game are left to analyze the one trailer that we do have this far. While Nintendo has yet to share more gameplay details about Breath of the Wild 2, the game's initial reveal trailer that debuted in E3 2019 does hint that the sequel might fix one of the first game's problems but adding a lot of literal depth.

Nintendo has yet to confirm a release date window for the game, but renowned leaker Sabi claimed via Twitter in 2019 that the company planned to release it in 2020 before later saying that it had been pushed to 2021. (Both tweets have since been deleted.) The first half of 2021 does seem like the best-case scenario, assuming Nintendo announces something in the near future.

Reflecting on Breath of the Wild sequel's reveal trailer, however, does hint that it might reuse many of the same environments but explore subterranean areas of the first game's map.

It's clear that Link and Zelda are in some sort of underground catacomb beneath Hyrule. In the trailer, there's what appears to be the entrance to a catacomb and Hyrule castle rising out of the ground, exposing whatever is beneath it.

While we don't know what this all will mean for the game yet, it sure seems like Nintendo might embrace this catacomb concept and create one or more sprawling dungeons underneath Hyrule for players to explore in Breath of the Wild 2. And this intriguing new addition has already been rumored.

Game streamer Tyler McVicker hinted during a March 2020 stream. "The locations are worked out much deeper than in the original," a Reddit post summarizing the hints reads. "At the very least, McVicker hints at the appearance of dungeons, strongly inspired by one game that knows a lot about spreading dungeons around the open world." The main narrative of the game would be cleansing Hyrule — both on the surface and underground — of "a miasmic version of Ganon" likened to an "infection."

If the sequel were to incorporate underground dungeons or one vast subterranean network, that would not only fix the first game's problem of not having many in-depth dungeons to explore, but it would also give Breath of the Wild 2 what feels like two worlds to explore without having to change much about the overworld map from the first game.

The Legend of Zelda games is no stranger to this "dual worlds" concept, which was most famously used in The Legend of Zelda: A Link to the Past. As we already have a fantastic open world to explore from the first game that might not be changed much, being able to explore the underbelly of Hyrule would be a simple but still engaging way to expand the first game while reusing many of the same assets. If true, this would cut down on development time significantly, which would then in turn make a sooner release much more likely.

The concept could function similarly to the dungeons in games like The Legend of Zelda: Ocarina of Time and The Legend of Zelda: The Wind Waker. While the original Breath of the Wild contained several shrines with clever puzzles and Divine Beasts with ambitious setpieces, it lacked the tried and true dungeon format that the series is known for.

Breath of the Wild 2 can course-correct back to the beloved format by creating a massive underground maze of dungeons, or at least several new dungeon-like tombs, for Link (and maybe Zelda) to explore throughout the game. Nintendo needs to add something to Breath of the Wild 2's world in order to make feel distinct enough from the original to justify being a sequel with the same map — that is, assuming it does keep the same overworld.

The Hyrule overworld doesn't need to change very much beyond Hyrule Castle being raised and whatever lies beneath it. Regardless, adding a massive underground dungeon like this would make The Legend of Zelda: Breath of the Wild 2 a game that merges three classic elements of Zelda design: an open world, intricate dungeons, and a two-worlds setup.