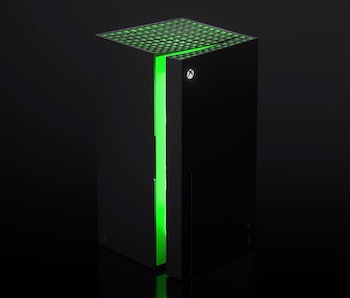 While Microsoft is currently hard at work supporting its Xbox Series X|S consoles, it also has another piece of hardware in the works. But we’re not talking about a new system. Instead, the company will be launching an Xbox Mini Fridge modeled to look like the Xbox Series X console. When the Xbox Series X was first revealed in 2019, many joked that it looked like a mini-fridge due to how tall it stands. It quickly became a meme, which indirectly created more discussion around the system. Well, Microsoft knows how to take (and make) a joke. It has turned the meme into a purchasable reality. How did this happen? And when can you get your hands on the Xbox Mini Fridge? Here’s everything we know about the “coolest” Xbox you can buy.

When is the Xbox Mini Fridge release date?

It’s still unclear when exactly the new Xbox Mini Fridge will launch, but Microsoft announced it will be available in December 2021 across the United States, Canada, and parts of Europe. Microsoft will work on making the fridge available across more regions in 2022. We just hope it’s easier to get your hands on than the Xbox Series X|S.

What is the Xbox Mini Fridge price?

Is there an Xbox Mini Fridge trailer?

There sure is, and it’s pretty funny. Microsoft’s marketing has been on point this generation and that’s evidenced by the trailer above. It’s presented to look like a game trailer, but then the rug is pulled out from under you, revealing the Xbox Mini Fridge. And hey, it even has “Xbox Velocity Cooling Architecture,” which is a plus.

What are the Xbox Mini Fridge dimensions?

The exact dimensions of the mini-fridge haven’t been revealed just yet, but it seems like the appliance will be able to hold around 10 cans depending on their size. While that is on the smaller size, it’s still remarkable this thing even exists.

The fridge itself has built-in LEDs, and can hold up to 12 cans, with two shelves perfect for snacks. You can also utilize the USB port on the front of the fridge to charge your devices.

On October 15, Microsoft announced the Xbox Mini Fridge would be exclusive to Target. Pre-orders will go live starting on October 19.

Why does the Xbox Mini Fridge exist?

Speaking of the existence of the Xbox Mini Fridge, it’s fascinating how the appliance came to be. In April 2021, Twitter Marketing held a contest for the Best of Tweets Brand, recognizing some of the most iconic companies out there.

It ultimately came down to Xbox versus Skittles, but the votes were nearly split down the middle. Ahead of the contest’s end, Microsoft’s GM and head of Xbox Games Marketing Aaron Greenberg took to Twitter to announce that if Xbox won, he would make the mini-fridge a reality.

At the end of the contest, Xbox narrowly took the victory, reaching 50.5 percent of the votes and thus launching the Xbox Mini Fridge into existence.

The Xbox Mini Fridge will launch in December 2021.

This article was originally published on June 21, 2021