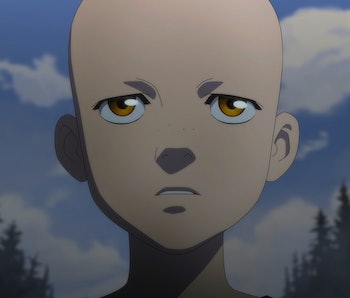 Here’s everything that Nightmare of the Wolf establishes for the future of The Witcher in Season 2 and beyond. (Warning! Spoilers ahead.)

As fun as it is to imagine Geralt and his Witcher pals as vagabonds, they once had a permanent residence. That home was Kaer Morhen.

As we see in Nightmare of the Wolf, Kaer Morhen was the natural abode of any Witcher affiliated with the School of the Wolf. The fort hosted numerous places for Witchers to improve and rest.

Kaer Morhen isn’t new to Nightmare of the Wolf. It’s appeared in basically every Witcher narrative. As confirmed during WitcherCon in July 2021, The Witcher Season 2 will finally debut the keep in live-action. Keep this location in mind as it’s central to the entire franchise.

In Nightmare of the Wolf, we see Kaer Morhen sacked. Numerous parts of the stronghold are destroyed by an enemy force led by Tetra Gilcrest. Similar to Kaer Morhen’s ubiquity across The Witcher franchise, its decimation is discussed nearly everywhere, but the actual details were often scarce.

We’ll likely see Witchers carry the weight of Kaer Morhen’s destruction on their shoulders in Season 2.

Additionally, since the film establishes numerous details about the actual attack, such as the appearance of Tetra Gilcrest, we might see these explored in season 2. Gilcrest even does us the honor of connecting her existence to the Aretuza magical academy, where we watched Yennifer attend in Season 1.

3. Vesemir, the most senior Witcher

Perhaps the biggest thing Nightmare of the Wolf does is establish Geralt’s mentor, Vesemir. You can see him in most mediums of the Witcher story. He’s an avuncular fellow who often provides guidance to Geralt.

Nightmare of the Wolf establishes Vesemir’s character as more than just a mentor figure. You’re given a rare glimpse into his past with Illyana. We’re shown that he became a Witcher after being brought to the keep by Deglan.

Vesemir has been confirmed to appear in The Witcher Season 2, as portrayed by Kim Bodnia (Killing Eve). By witnessing his story in Nightmare of the Wolf, you’ll learn of the numerous trials and tribulations Vesemir endured. When he shows up, Vesemir will have his more established role as the oldest and wisest Witcher at Kaer Morhen.

Vesemir names Eskel and Lambert as two of the trainees he expects to pass the Trial of the Grasses. In the present day, Eskel and Lambert are colleagues of Geralt. We interact with them multiple times throughout the games. Both characters are expected to appear in The Witcher Season 2, portrayed by Basil Eidenbenz and Paul Bullion, respectively.

Later in the film, we’re told that Eskel and Lambert have yet another trainee, a freckled bald boy named Geralt. This is the exact same Geralt we follow in the proper series.

After Kaer Morhen’s destruction, Vesemir officially takes the Witchers-in-training as his own. These short moments establishing the children will allow us to understand why the young Witchers will have such an attachment to Vesemir once Season 2 airs.

Nightmare of the Wolf opens with a conflict between Vesemir and a creature known as a Leshen. You might write it off as some fantasy mumbo jumbo that's just like every other monster. Please don’t.

Make no mistake, Leshen are some of the most fearsome creatures in the whole franchise, and this opening scene confirms it. Back in July, it was revealed that a brawl against a Leshen would also provide the opening monster fight to The Witcher Season 2. Remember this creature, it will terrify you live-action pretty soon.

Nightmare of the Wolf is streaming now on Netflix. The Witcher Season 2 arrives on December 17, 2021.