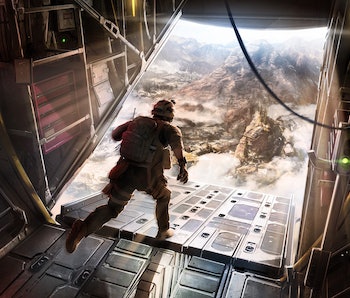 Warzone is going mobile! The aptly titled Call of Duty: Warzone Mobile brings the battle royale fun to the small screen, allowing players to enjoy it on the go. While it aims to fundamentally mirror the original Warzone experience, Mobile is an all-new entry built with smart devices in mind. Even though this new installment will iterate upon the familiar battle royale formula, it will also incorporate its own unique features. But when will Warzone: Mobile launch and what do we know about it?

When is the Warzone Mobile release window?

Activision revealed that Warzone Mobile will launch in 2023 at an unspecified date. The game is currently in its closed alpha phase, allowing various content creators to test it before its official release.

Is there a Warzone Mobile trailer?

There is! A brief, 9-second clip accompanied the game’s official announcement, but as part of the Call of Duty: Next event, Activision gave us a better look at the upcoming title.

The trailer gives us a cinematic look at Verdansk’s return, but this time, on the small screen.

What are the Warzone Mobile features?

While Activision hasn’t confirmed everything about Warzone: Mobile, there’s a lot we know about the upcoming battle royale game. For starters, it will support up to 120 players at once, and will incorporate a shared progression system with other Call of Duty titles including Modern Warfare II and Warzone 2.0.

Activision also noted that players will have the chance to pre-register for the game early, and doing so will net rewards at launch.

“Our mission with Project Aurora (Warzone: Mobile), the codename for our new mobile title, is to bring friends, families, and people around the world together in a global community of diverse players with a fast-paced, precise, and high-quality battle royale action experience that delivers a fresh new way to play,” an Activision spokesperson said (via Video Games Chronicle).

There have been no shortage of Warzone: Mobile leaks ahead of its full reveal and based on early footage, the game is in great shape already. Early footage indicates it will run at around 40 to 60 frames per second depending on the device.

It also appears like many of the mechanics from the original version will appear in Warzone: Mobile, such as the gas mask (and, presumably the gas mechanics), contracts, and weapons from the Modern Warfare era.

Activision confirmed this game will play similarly to the original version of Warzone from 2020, with the return of the Gulag, vehicles, Buy Stations, kill streaks, and even newer mechanics like the Revive Token.

We have plenty of questions about the upcoming release such as how it will integrate with Warzone 2.0, how it will run, and whether or not it’ll include controller support. But for now, we’re optimistic about Warzone: Mobile.

What are the Warzone Mobile pre-register details?

You can pre-register for Warzone Mobile right now and doing so will earn progress towards community rewards.

Will Warzone Mobile include Verdansk?

Verdansk is making its return, after months of leaks and rumors. Activision teased the map’s inclusion before Warzone Mobile’s full reveal, and then showed it off in action during Call of Duty: Next.

This is the Verdansk you remember from Warzone’s launch, with a closed version of Stadium, and all the other beloved POIs from 2020. It’s unclear if the developer plans on changing aspects of Verdansk over time like the main version of Warzone did, but for now, you can count on revisiting the map that started it all.

This article was originally published on Sep. 13, 2022