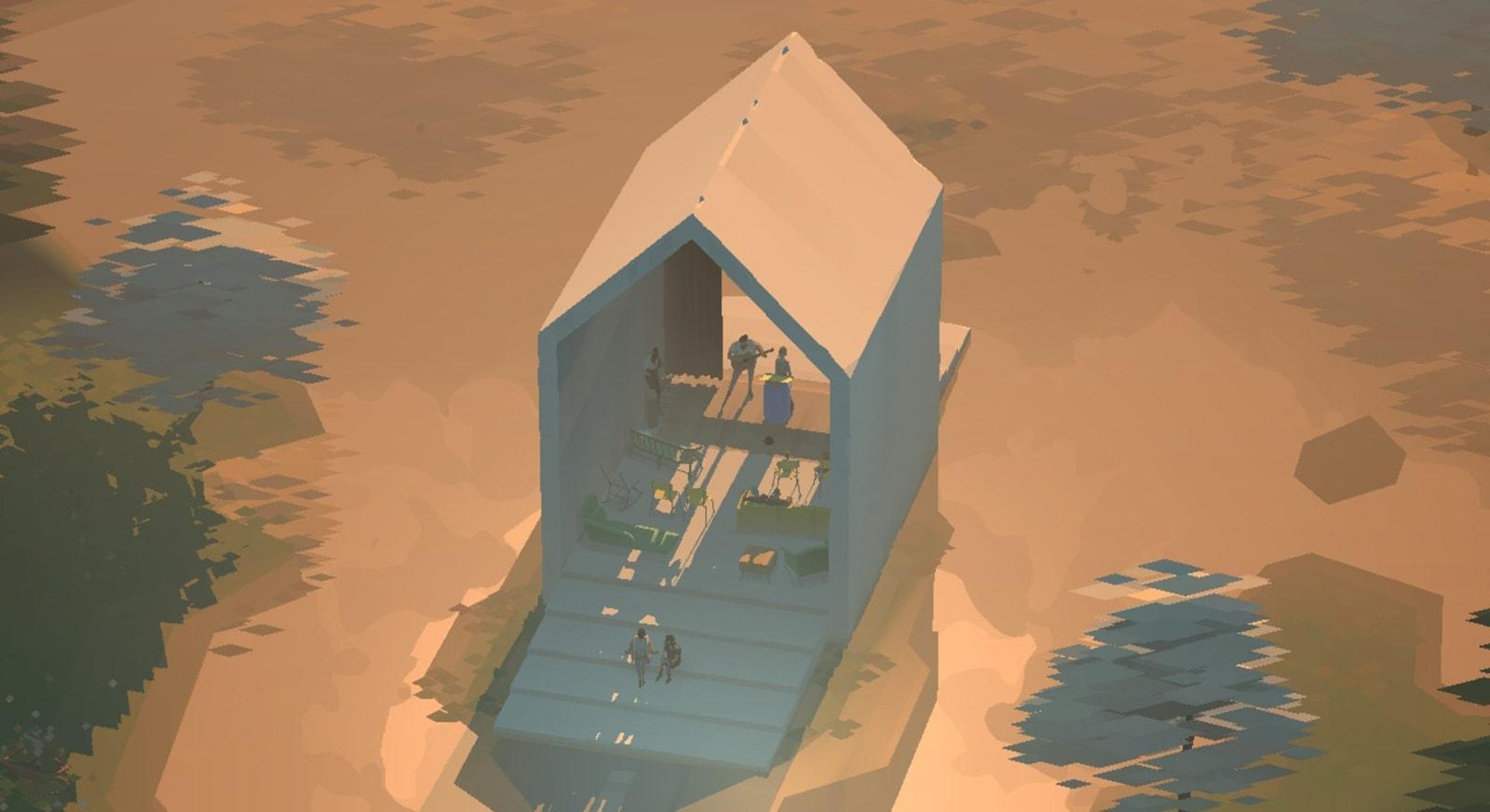 The curtain rises on a performance of The Entertainment.

This interlude between acts of Annapurna Interactive’s lauded indie game Kentucky Route Zero is a combination of two plays produced in a small, cramped theater. You are a member of the audience, but also an actor playing a mute bar-fly. You can hear the dialogue around you, read the director’s notes and even the reviews, but you are locked in place.

It’s a strange way to view theater. It’s an even stranger way to play a video game. But The Entertainment highlights how video games use theatrical techniques to transform players into someone just like the bar-fly — an actor and a spectator all at once.

Games have made players both the star of the show and the privileged observer since at least the 1990s. (Remember the rising curtain at the start of Super Mario Bros. 3?) But Kentucky Route Zero relies on theatrical techniques to underscore just how little control we have over our own life stories. And it’s a trick that more video games should aspire to.

Released in five installments between 2013 and 2020, Kentucky Route Zero follows an antiques delivery driver Conway on one last delivery — accessible only via a mysterious highway known as the Zero. Along the way, he makes friends, explores local landmarks, and uncovers dark secrets.

The Entertainment makes for a stark contrast to the immersive feel of the rest of the game. You’re a performer on stage, but you’re given no lines, no blocking. You’re frozen under the watchful eye of the faceless audience. It highlights the indivisible bind between video games and theater. You may not even notice it, but by playing any game, you position yourself as actor, director, and playwright of your own immersive story.

There’s probably no instance of theater in video games as influential as the Opera House scene in 1994’s Final Fantasy VI. In it, the player must impersonate a singer on stage, while also preventing her from being kidnapped during her performance. It has all the hallmarks of an actual stage performance: you’re given a libretto to memorize and have to hit your marks as the show continues.

The sequence does serve a purpose in the overall plot, eventually allowing your heroes to get an airship and reunite with their scattered allies. But a lesser game would have scripted the whole “obtain a vehicle” quest in a far more straightforward way.

Final Fantasy VI makes this indulgent digression shortly after the story takes a decidedly dark turn. A global cataclysm reshapes the world’s surface and scatters your dozen-or-so companions to the winds. Everything sucks for a while, but suddenly you’re drawn into this lavish world of art, music, and beauty. Life is still happening. The game goes on.

Once you complete the opera, the sky is quite literally the limit. Now, you can fly anywhere you want and reunite with your friends in any order you choose. It’s as if the game is saying: See all these characters you’ve grown to know and love over the last couple dozen hours? Well, it’s your job to save them.

But where Final Fantasy VI’s Opera House urges players to strap on their boots and save the world, Kentucky Route Zero invokes the theatrical to raise more challenging existential questions about the nature of subjectivity and even reality itself.

The Meaning of It All

Kentucky Route Zero adapts numerous elements of the movement known as Theater of the Absurd, which emphasizes the surreal and experimental, thumbing its nose at longstanding conventions for stage plays. The best-known example of this style is Samuel Beckett’s Waiting for Godot, where two characters muse about life while waiting for a third character who never shows up.

Whole lines from Godot are quoted in the “stage directions” of Kentucky Route Zero, and the creators have said they treated the production more like a play than a video game. Cardboard Computer’s Tamas Kemenczy describes building the environment of KRZ not as set design but as “scenography,” a term defined by author Pamela Howard as “the seamless synthesis of space, text, research, art, actors, directors, and spectators.”

In other words, scenography is less about designing a world to mimic our world, but to create a world of its own, keeping in mind the relationship between art and viewer, or in terms of video games, game and player.

At the 2014 Game Developer’s Conference, Kemenczy noted that the scenography of KRZ was heavily influenced by illusionary set design — scenes like the gas station are nothing more than layered cutouts using forced perspective, just like plays staged centuries earlier. As the game progresses, the influences in its scenography become steadily more modern — these sets aren’t aiming to create a naturalistic illusion; they’re dynamic spaces that clue us into the characters’ emotional journey.

In a flashback, Conway and Shannon visit a distillery deep below a graveyard inhabited by skeleton creatures, the place that ultimately holds Conway’s fate. The High Times Distillery is an empty, dream-like space made up of stairways and platforms.

In Act II, Shannon asks Conway if they’re inside or outside, and the player, as Conway, has three options for a response: Inside, outside, or both. But the distillery seems to exist outside of these boundaries. This blurring of interior and exterior is another calling card of contemporary theater design.

Video games are often praised for being “cinematic,” meaning they have splashy visuals that are the product of staggering amounts of time and money. But perhaps theatricality might be a better frame of reference for the more ambitious stories and ideas posed by interactive entertainment.

As best as it can manage on a Super Nintendo, Final Fantasy VI aspires toward a cinematic experience. But Kentucky Route Zero is adamantly disinterested in that. Its goal is not aligned with more recent “cinematic” games like Death Stranding or The Last of Us. It’s theatrical.

Kentucky Route Zero is a microcosm of all the roles a player takes on while playing a narrative-based game. The camera is often fixed or moves along with the set, part of the scenography, like the lighting or environment. The player can control these elements just as they control the dialogue and action.

“Because we’re talking about a video game environment and not a physical theater space, the roles of performer and spectator collapse and become the same thing, the player character,” Kemenczy explained in his 2014 talk.

The Entertainment is the moment where Kentucky Route Zero pulls the wool away from the player’s eyes. After hours of gameplay with an illusion of control, suddenly you’re frozen in place. Despite not being able to shape the outcome, you can influence the flow of the action, the details of the environment, and the metatextual “performance” that comes with any video game. While Final Fantasy VI invokes the stage as a heroic call to action, The Entertainment confronts players with the limits of personal agency. You can’t fix everything, not this time.