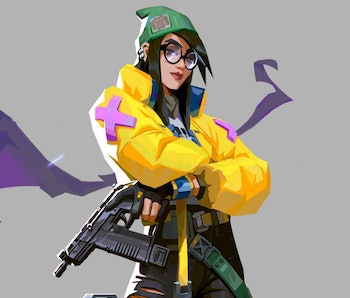 Valorant Act 2 will start on August 4, and Riot Games has confirmed the new season will introduce a brand-new agent: Killjoy. She's quite different from all the previous agents in Valorant with object-based abilities similar to Torbjorn in Overwatch. Here's what you need to know about this new contender.

Who is Killjoy? "Known as the genius of Germany, this tinkerer effortlessly secures key battlefield positions with her arsenal of inventions," Riot Games' official description explains.

"If Killjoy’s weapons don't immediately take her enemies out, the debuffs her robots provide will make short work of them." Basically, she's a prodigy inventor who creates weapons and tools to boost her chances in Valorant matches.

Killjoy is noticeably different from any previous Valorant agent — she is a bit younger and sports a purple and yellow jacket, green hat, and black pants. Her turrets and grenades have cute designs that enhance her quirky charm. If you want to get a feeling for the mood the developers are trying to establish with this character, you can check out the official Spotify playlist for Killjoy.

What are Killjoy's abilities? Like all agents of Valorant, Killjoy has access to several unique abilities to help turn the tide of a fight. Her abilities mainly utilize items or weapons, like Overwatch's Torbjorn.

While Killjoy's abilities do their fair share of damage, she also seems to be great and supporting allies or debuffing enemies to turn the tide of a battle at key moments. This is a very unique playstyle when compared to any other Valorant agent. Hopefully, future agents can maintain this level of creativity going forward.

What do you get from Killjoy's contracts? If you aren't paying, you'll need to complete an Agent Contract to gain access to Killjoy in Valorant. While the specific progression of her contract hasn't been revealed yet, Riot Games confirmed that Killjoy's Agent Contract contains three sprays, a gun buddy, two titles, and a special play card in addition to Killjoy herself.

When will Killjoy be released? As we've mentioned, Killjoy will be released alongside Act 2 of Valorant on August 4, 2020. Once that day rolls around, she appears to be useable in any kind of match or server and you can start working towards completing her Agent Contact.

If Riot Games keeps this release cadence up, it appears that we can expect new Agents like Killjoy to come to Valorant every two months or so with a new Episode.