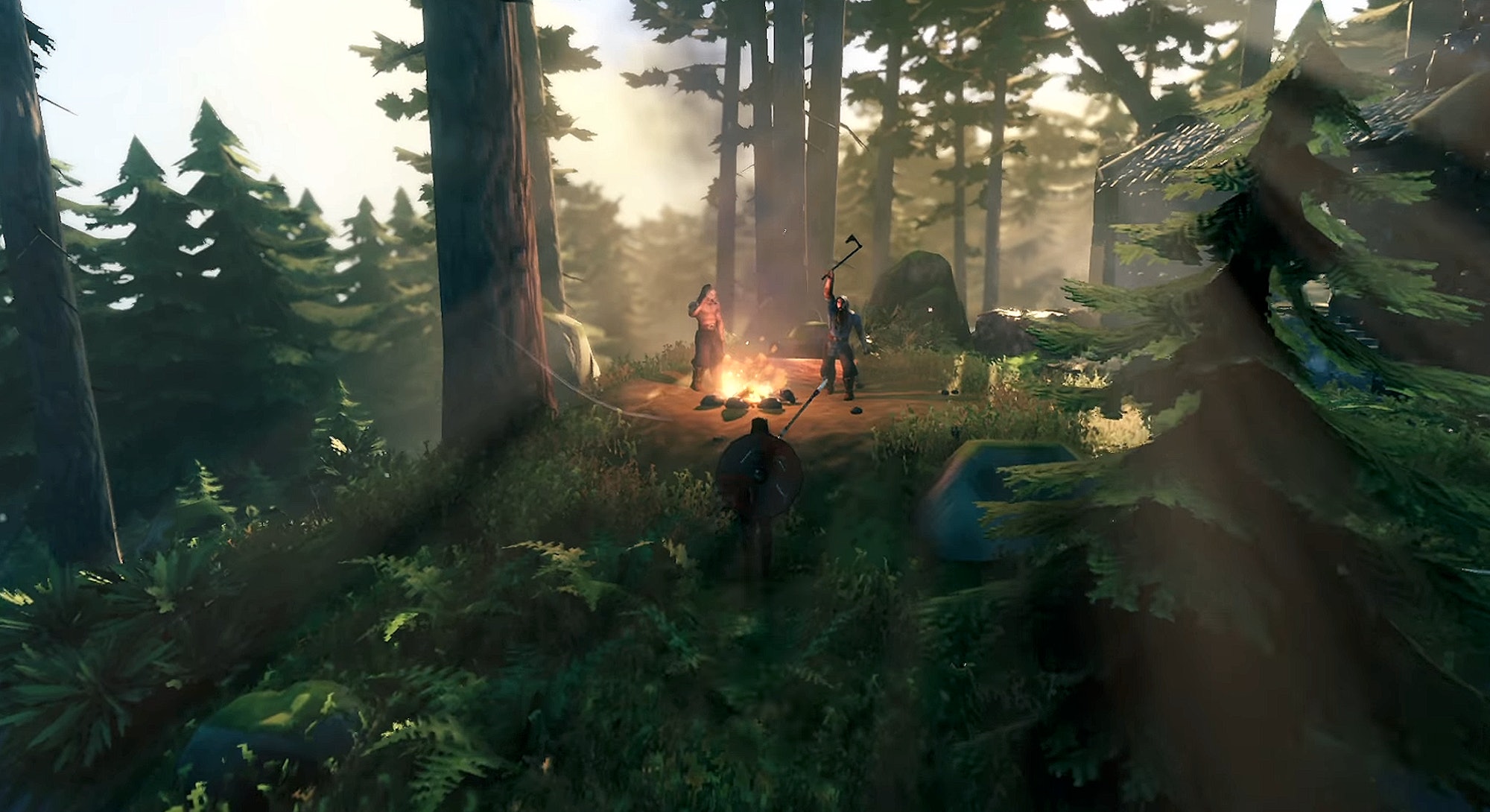 If you’ve been online in the last several weeks, you’ll know the name Valheim.

Combining the building and survival elements of games like Rust and Minecraft with the mythos of God of War, this Viking-themed sandbox has become a gaming phenomenon. Shifting a jaw-dropping five million units since its February 2 release and breaking multiple Steam concurrent player records, this Swedish-made mega-hit shows no sign of slowing down.

The question is then, where did it come from? While this might not concern the five million Asgardians happily whacking boars and building longships, as someone who covers video games for a living, Valheim’s viral success came as a total shock. While the writing was on the wall for last summer’s viral jelly bean game show Fall Guys, and a steady stream of Twitch hype presaged the success of Among Us, Valheim’s sudden popularity came out of nowhere.

Sebastian Badylak, Executive Producer at Coffee Stain Publishing, was caught off-guard by it too.

“Two hours after we hit the publish button on Steam, we realized that Valheim was a lot bigger than we had anticipated,” Badylak tells Inverse.

Inverse spoke with Badylak and Valheim’s design director Henrik Tornqvist about the game’s four-year journey from ambitious passion project to global sensation. Here’s how, against the odds, two childhood friends from a small town in Sweden made a record-breaking phenomenon.

Following a solid if unremarkable debut at 2020’s PC Gaming Show, Badylak and Valheim creators Iron Gate Studios were optimistic about the launch. With just shy of 5,000 people on the game’s Discord pre-release and a healthy amount of players adding Valheim to their Steam Wishlist, Badylak was cautiously optimistic Valheim could hit 10,000 players on day one.

“In the first two hours, we had sold 50,000 units,” recalls a still shell-shocked Badylak, “It felt a bit surreal — in hours, the game had already exceeded our week-one sales projections. It was one of those situations when you're kind of hitting F5 in the Steam backend and thinking, “Is there something wrong here? Are the numbers off somehow?!’”

The numbers weren’t off. Twenty days after its release, Valheim had hit more than 500,000 concurrent players on Steam. To put that staggering feat into perspective, only four other games have reached that player count to date: Industry big boys PUBG, CS:GO, Dota 2 and Cyberpunk 2077. In a matter of days, this scrappy five-man made survival game had gone from an unknown quantity to challenging the biggest names in gaming.

“I've been in the business since 2008, I‘ve released some games on Steam — some of them with a pretty positive response,” he tells Inverse. “But I've never been a part of anything like this. I guess it is, perhaps, a once-in-a-lifetime deal.”

While Valheim may have only existed in the minds of players for the last several weeks, the vision for it was born almost four years ago. Working at THQ Nordic studio Pieces Interactive In 2017, Tornqvist found himself developing a DLC for action role-playing series Titan Quest. He shared an office with long-time university friend Richard Svensson, who was working on an ambitious multiplayer game that reimagined Minecraft as a bloody, co-op Viking sim. Intrigued by Svensson’s vision, Tornqvist joined him as Iron Gate Studio’s co-founder in early 2018, leaving the safety net of his job behind.

“What really hooked me was the building aspect of the game — although it wasn't as good as it is now. Just building Viking long houses and stuff like that was very rewarding. When I decided to jump over, the game was already in a good state feature-wise. If we just got the time needed to digest it properly, we could have a good game on our hands.”

“In hours, the game had already exceeded our week-one sales projections.”

Offering a surprising breadth of different gameplay features — cooking, building, combat, and sailing — for a Steam Early Access release, much of Valheim already feels like a finished product.

“That was a conscious decision on our part, to have Valheim as feature-complete as possible,” reveals Tornqvist. “We wanted it to be 75 percent feature-complete, and 50 percent content complete. We were going into early access with a game that is stable, and where the players know what kind of gameplay experience they're getting. Then we can add boatloads of content as we go.”

Valheim isn’t just a technically impressive experience, but one that succeeds artistically, too. From its soothing orchestral soundtrack to its lovingly rendered environments, Valheim is one of the few survival titles with a real personality – an experience that matches the feel of a lovingly crafted single-player epic.

“We wanted to make a single-player adventure that you can play in co-op, basically,” says Tornqvist, “We were inspired by Breath of the Wild — a lot of the physicality in the world comes from that game, with rolling, falling trees, and stuff like that. Skyrim and Terraria have been great influences for us, too.”

It’s no surprise that Valheim has taken this five-man team just shy of four years to develop – as it is absolutely massive. Boasting a procedurally generated map that spans a staggering 314 km^2 radius — roughly the size of cities like Dublin and Philadelphia — Valheim’s Norse playground is second in size only to Minecraft. (Bethesda’s impressive open-world opus Skyrim only comes in at 20 km^2.)

So how on Earth did a five-man team pull this off?

“It has everything to do with being smart in the implementations, “ explains Tornqvist “The world is procedurally generated — so we get a lot for free in there. Rather than inventing new stuff, every time we need a new gameplay feature we try to take from the ones we already have and tweak them in a way that makes it rewarding.”

Like Animal Crossing: New Horizons last March, Valheim seems to have arrived at the perfect time. “With COVID, people want to have a bit of a meatier game, one they can return to many times,” says Tornqvist. Valheim’s appeal also stems from its ability to bring people together for positive and creative collaboration., Tornqvist and Badylak, both emphasized that the community’s bold and ambitious creations were a huge source of pride and happiness.

“Players have built the Starship Enterprise, stuff from Lord of the Rings. Last night, I even saw someone do beer pong in their meat Hall,” says Badylak excitedly. “Other people have made original songs, music, and fan art for us. There are just so many cool things coming out of the community.”

“We were inspired by Breath of the Wild — a lot of the physicality in the world comes from that game.”

Obliterating milestones with each new week, the creators of Valheim have a lot to celebrate. Tornqvist also takes pride in the experience his small team has managed to create.

“I am just very proud that Valheim feels like a balanced, stable game. Of course, it has bugs and issues, but we've laid good groundwork,” he explains. “So often in this project-driven industry, the groundwork is not given enough time.”

The team at Coffee Stain has already announced a roadmap with four updates, including a larger one they hope to have out before 2022. “First, we’re gonna improve the building aspect with more pieces, and add more cooking stuff,” Tornqvis elaborates. “Then we're gonna do a little bit of combat and exploration in update two and we have to fix up the sea sailing and add customizable ships.”

Valheim’s overnight success on PC has left console players antsy to get in on the action. Tornqvist says the team is open to the idea, but it’s not likely to happen anytime soon.

“Obviously, we would love to bring it to consoles – but we don't have any plans for it right now. Ultimately we would like Valheim to be on as many platforms as possible,” he adds. “And now, we just want to make Valheim even better!”

The monumental hype surrounding the game can make it easy to overlook that for Badylak, Tornqvist, and Svensson, Valheim is the realization of a childhood dream born in the quiet Swedish town of Skövde.

“Henrik and I met in elementary school,” reveals Badylak, “Richard and I met at university. That's where it all kind of started — our hopes and dreams of becoming successful indie devs — and now it’s happened. So, I'm very proud of my friends for making this game.”