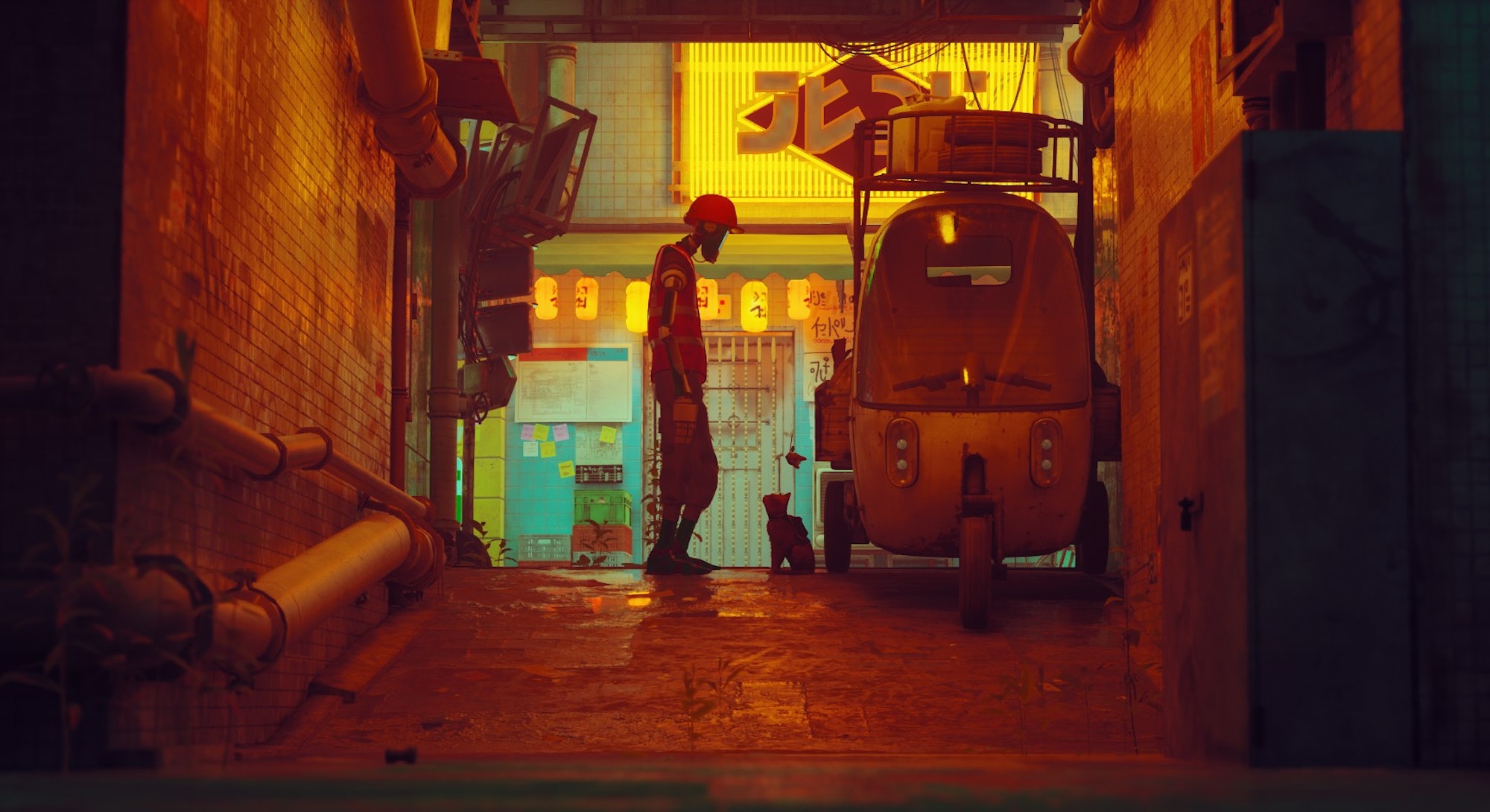 There are a lot of games that feature cats, but Stray is the only one that puts the feline experience front and center — right down to the trademark annoying behaviors.

Ever since its reveal at Sony’s State of Play presentation in 2020, it’s drawn the attention of cat lovers around the world. Developers at Blue Twelve have a deep love for cats — which should come as no surprise — intertwined with a desire to create a unique cyberpunk world filled with robots.

What you might not know, however, is that the game’s original vision looked very different and decidedly less robotic.

“They started doing some tests with human NPCs,” producer Swann Martin-Raget tells Inverse, “but realized that to have the level of visual quality and fidelity they wanted for the whole game would be extremely time-consuming and very hard to do with a small team. So we started to do some experiments with robots that are a bit easier to modelize and place in the scenes.”

Ahead of Stray’s July release, Inverse spoke with Martin-Raget about the inspiration behind the game and why more thoughtful presentations of animals in gaming at large is something he wants to see more of.

Where did the idea for Stray first come from?

Martin-Raget - Viv and Koola, who are the co-founders of the studio and directors on the project, were artists before starting the company. They have always been fascinated by a place that no longer exists — the Kowloon Walled City in Hong Kong. It was a very unique place with the density of people being extremely high, and that resulted in construction that almost felt organic, the amount of detail and the number of things that are put together were fascinating to them.

So they started to think about an artistic direction based on that reference, and as they were doing so they started to realize that it was really the perfect playground for a cat, with the number of different paths and the amount of really fresh and interesting points of view.

Was the idea for a cyberpunk city inhabited by robots there from the start?

Martin-Raget - So that came a bit later. At the beginning, it was because of production constraints. When they were working on the game, they knew from the start that they wanted to remain a small team, it's something we really appreciate. They started doing some tests with human NPCs, but realized that to have the level of visual quality and fidelity they wanted for the whole game would be extremely time-consuming and very hard to do with a small team.

So we started to do some experiments with robots that are a bit easier to modelize and place in the scenes. As soon as we did that, we felt utterly inspired by the contrast between the cats being small, alive, and cute, and the machines being a bit more cold and angular.

Also, it inspired a lot of questions about the background in the backstory, like, ‘Who are these robots? Where are the humans? What is this place? ‘ So what was initially a production constraint ended up being something that really utterly inspired us. Also, it helps that we've always been fascinated by films like Blade Runner, I'm guessing you can tell from the look of the game.

Were there any other pieces of media or games where you play as an animal that you looked to as inspiration?

Martin-Raget - Something we realized along the way is that there is really not a lot, if any, references that we could use for controls and interactions. We knew quite very early in the project the type of situations and gameplay that we wanted, and it was really a bit of exploring, technically and in terms of animation as well. The most prolific inspiration was definitely our cats as a team and the cats that we have in the office that come to work with us every day.

Did you ever consider doing mo-cap?

Martin-Raget - Miko is the person that made the vast majority of cat animation in the game. He's really fluent and talented with keyframe animation, so we started the project using this technique. We heard about studios that provide actual cat motion capture — it was really funny for us to see the video of these poor cats in full mocap suits.

But we were quite happy with the freedom that making our own animation was giving us. Also, we have some situations in the game that would be very difficult and dangerous to ask a real cat to do.

Do you think playing as animals is something that we could explore more in games?

Martin-Raget - Yes, I do. There's so much inspiration in nature, that it's absolutely something that still holds a lot of gameplay opportunities and stories. Most of the team being cat owners and cat lovers, that was definitely our passion. The Twitter account “Can You Pet the Dog” shows that there's a lot of love for these mechanics. It's really interesting.

Do you have any favorite mechanics or things you can do in the game?

Martin-Raget - When you use your claws on the sofa, we actually have force feedback on the triggers. That really gives you a satisfying feeling of destroying an expensive piece of furniture. Now, instead of being annoyed that my cat is ruining everything at my home, I kind of felt the pleasure that this gives him, so that's my favorite feature. For sure.

Was it difficult to integrate DualSense technology into the game?

Martin-Raget - The physicality of the cat and being part of this interactive world was really important for us from start. We really wanted to try to make you feel like you're inside this world, and that the cat's body,.

So the type of feedback that the controller can give you was really a great opportunity. It was always interesting to add a very specific vibration and try to see how it feels. For example, when the cat is sleeping, you have a purring sound that comes out of the speaker, and also very subtle vibration, it really feels like you're holding a kitten in your hand. It’s very impressive the amount of subtlety that you can put into these vibrations, and we tried to explore as much of them as we could.

Stray primarily focuses on exploration, but did you ever consider including more straightforward action sequences?

Martin-Raget - We never considered actual fighting mechanics involving the cat. The bottom line is really the adventure, the pacing, and the rhythm at which we tell this journey. The story was something that was super high in our priorities.

Without spoiling anything, at some point in the story B12, the little drone that accompanies you, has abilities that allow him to counterattack the enemies that have been bullying us since the start of the game.

Speaking of B12, why did you decide to have a companion to the cat? Is there a relationship that develops between them throughout the experience?

Martin-Raget - The initial inspiration was really having a set of abilities that naturally complete the cat's natural skills. Cats are not really good when interacting with technology. This allowed us to have a lot more interesting and surprising things to do in the game. It also makes a very interesting character. He has his own developments in the game and his relationship with the cat also is something quite important that unfolds as you progress in your journey.

When Stray was first revealed it got a lot of attention. Has there been pressure on the team since you revealed it?

Martin-Raget - We weren't expecting the size of the excitement when we first revealed the game. We were extremely excited to see all the people, especially the cat owners, reacting to the game and being super interested in what we're making.

That was definitely what we were aiming for, but also we realized that we were a small team, this is our first game, and a lot of people are looking at us now. So we need to have something that is really polished as much as we can, and the experience to be as detailed and as real as we want it to be.

In terms of showing the game off, there was kind of a big quiet period there from the reveal up until the recent release date announcement. Was that an intentional decision, or was it more of a logistical thing?

Martin-Raget - It was definitely our intention to have the reveal of the concept to see how people react to the game that we're making, and then try to really focus on the production. We always knew that we wanted to communicate when the game was really close to being ready, and that was a helpful decision in letting us focus on creating the best experience possible.

As this is Blue Twelve’s first release, what does putting this game out mean for you as developers? And where do you go from here?

Martin-Raget - It really depends a lot on how players will enjoy the game and will react. We're still trying to finish, and have the best-polished experience as possible. So we try not to extrapolate too much on what is going to happen next. Depending on the feedback we have, we might think very differently about the future. So this being our first game, we feel that the best course is to see what happens and react to this.