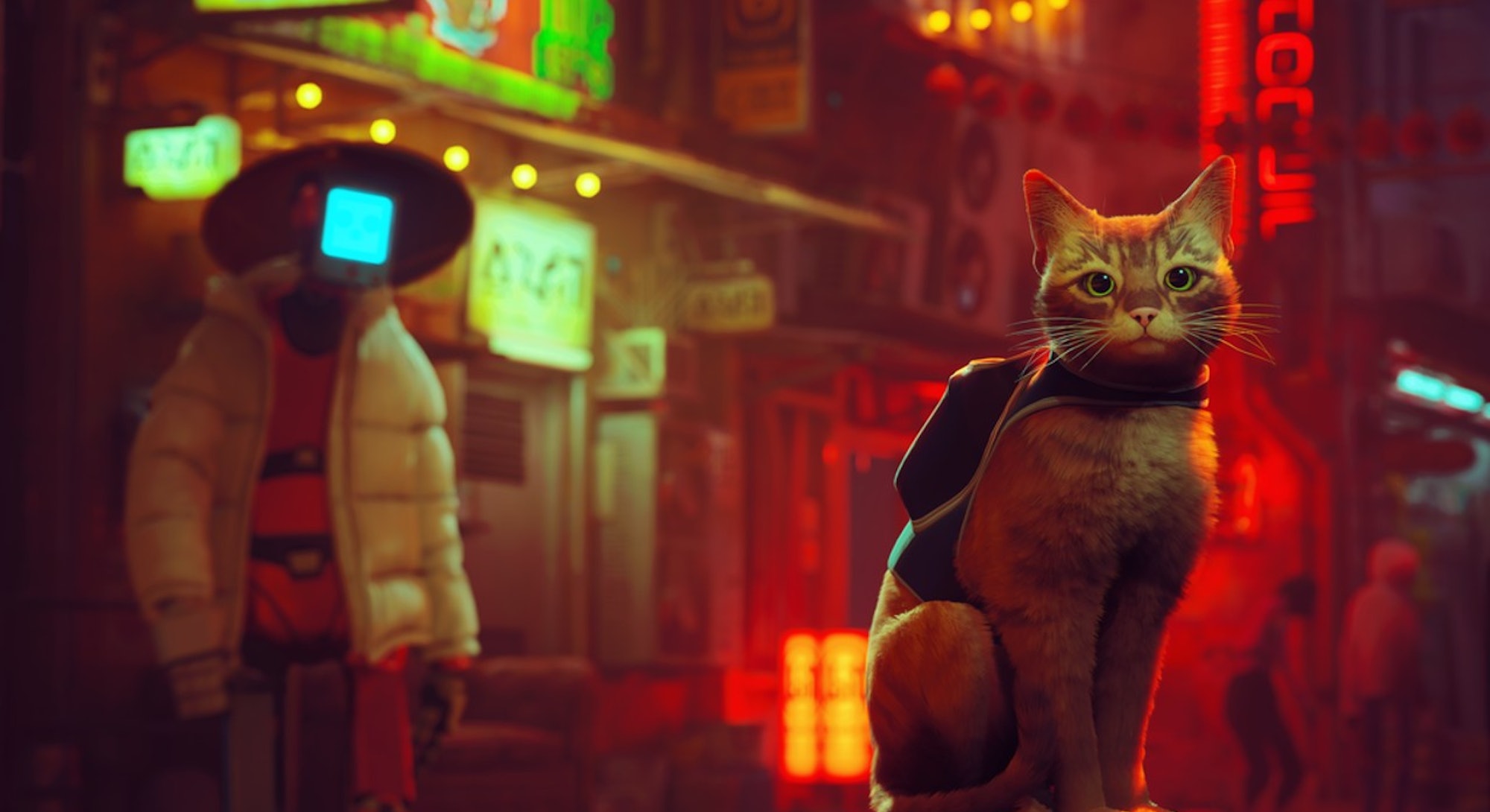 Demonic rat-like creatures chase the cat through a sewer, forcing it onto a pushcart that then rockets down a hill.

This adrenaline-packed action scene is the perfect change of pace from the mellow vibe of Stray’s core gameplay loop. The buzzy new offering from indie developer Bluetwelve might be the first game to make you really feel like a cat. As producer Swann Martin-Raget guided Inverse through an hour-long hands-off demo through a bustling cybercity, they continuously reiterated how the idea of playing as a cat molded every aspect of the game, including the general layout of areas.

Your feline hero is expectedly agile, and as cats are wont to do, can jump to virtually any object in sight. Exploration is a key part of Stray, and environments come in two flavors, more linear story sections and more open explorable hubs.

There’s a broad visual variety to these areas too, even though trailers have mainly shown a neon-ladened cyberpunk city so far. During the demo, we also explored a backstreet market inspired by the Kowloon Walled City in Hong Kong, a leafy green tree house wrapped around a water reserve, and a dank, dingy sewer.

Martin-Raget is keen to keep the story under wraps for now, singling it out as a “key” element of the overall experience. However, the basic setup is that your cat has been separated from its family and has to make its way through a world filled with sentient robots in order to return home. Early on, you cross paths with an adorable little robot named B-12 that has a variety of functions, like letting you converse with robots, use a flashlight, and discover collectibles called “Memories” that provide bits of story and lore. B-12 will grow and become more powerful — in some yet-to-be-revealed way — as the story goes on. Stray will have three stories that play out across the experience; the cat’s, B-12’s, and the tale of the machines inhabiting the mysterious city.

Stray looks stunning visually, but the minute-to-minute gameplay is its most charming element. Any cat owner knows full well the quirky little tendencies and behaviors they have, like knocking your prized statue off a ledge, or scratching that brand new couch you bought. The team integrated these kinds of idiosyncrasies into Stray as core gameplay elements.

During exploration, scratching a door will prompt your robo-pal to open it to investigate further, and you can hide in cardboard boxes to avoid enemies. You can also interact with virtually any robot in the world, rubbing up on their legs or asking for pets. According to Martin-Raget, the reactions will differ depending on the story beats and your location.

These cat-isms also lend themselves to unique riffs on familiar puzzle-solving, like knocking a can of paint off a ledge to break a window, or using the cat’s weight to bend flexible poles into makeshift bridges.

Martin-Raget describes the various environments as a “playground” for a cat, with tons of interactive elements. The team uses the PS5’s DualSense controller’s touch-sensitive features to bring the experience to life in a more tactile way, too, putting resistance in the trigger when you scratch things, and imitating the rumble of a cat’s purr.

Bluetwelve clearly has a deep love of cats, and Stray is shaping up to be one of the most unique games of 2022. As a cat owner, I was astounded at how lifelike the movement and mannerisms of the cat felt, even though Martin-Raget confirmed the team used reference-based animation instead of motion capture. There’s an undeniable charm and air of mystery to the game. Publisher Annapurna Interactive has made a name for itself by releasing unique and artistic games, and so far Stray looks to fit that to a tee.

Stray comes to PlayStation 4, PS5, and PC later this year.