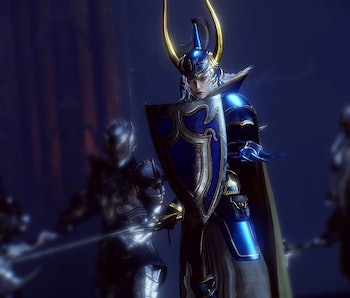 Stranger of Paradise is the most interesting Final Fantasy spinoffs in years, from the meme-worthy dialogue to the intense action combat. Players immediately fell in love with the game’s grumpy hero, Jack Garland, and the good news is there’s even more content coming with a set of three expansions. These new missions will take place after the main campaign, so make sure to finish that first. Here’s everything you need to know about Stranger of Paradise: Final Fantasy Origin’s DLC expansions.

When is the Stranger of Paradise: Trials of the Dragon King release date?

Stranger of Paradise’s first expansion, Trials of the Dragon King, launches on July 20 for all platforms. At the moment, it seems like the Season Pass, which costs $29.99, is the only way to play the expansion, with a recent trailer stating that “additional missions require the base game and season pass to play.”

Is there a Trials of the Dragon King Trailer?

Square Enix has released a single short trailer for Trials of the Dragon King, showing off a bit of gameplay and two surprising new boss battles. The first of these seems to be the legendary summon monster Bahamut, which would correspond with the Dragon King. This is a particularly interesting detail as none of the usual summons were present in Stranger of Paradise until now, so it’s not clear what Bahamut’s role is. In the trailer, Jack seemingly tells Bahamut “Don’t forget about our deal.”

The second boss is none other than the Warrior of Light, sporting his look from the Dissidia games. The end of Stranger of Paradise revealed Jack and his friends turned into Garland and the Four Fiends, waiting for the true Warriors of Light to emerge. This DLC will likely expand on the story of the main game, showing what happens when Jack faces off against the heroes, and after.

When will Stranger of Paradise’s other DLC be released?

There’s currently no release date or window for the other two Stranger of Paradise expansions, titled “Wanderer of the Rift” and “Different Future.” However, considering Square Enix surprise announced the release date for Trials of the Dragon King near the start of July, so it’ll likely be similar for the next two.

Stranger of Paradise first released on March 18, 2022, meaning it took roughly four months for the first expansion to release. If Square Enix sticks to that kind of schedule we’ll likely see Wanderer of the Rift out before the end of the year, and Different Future sometime at the start of the year. That timeline would make sense as it schedules some Final Fantasy content for the first part of 2023, before the release of Final Fantasy XVI.

What Is Stranger of Paradise’s DLC story?

Although Square Enix hasn’t officially released any details on the next expansions, based on the names we can likely draw a few conclusions. Seeing as Trial of the Dragon King is named after Bahamut, it seems incredibly likely Wanderer of the Rift is referring to a specific character as well. The first that springs to mind is Gilgamesh, the interdimensional traveler that has appeared throughout the series. In the mobile game Final Fantasy Record Keeper, Gilgamesh is even referred to as the “Wanderer of the Rift,” so it seems a sure fit.

Different Future, on the other hand, could refer to Jack and his friend’s fate being changed, or the world, in general, being changed because of the new Warriors of Light. The naming convention seems similar to Final Fantasy XV’s “Dawn of the Future” novel, which created a new ending for the game’s characters.