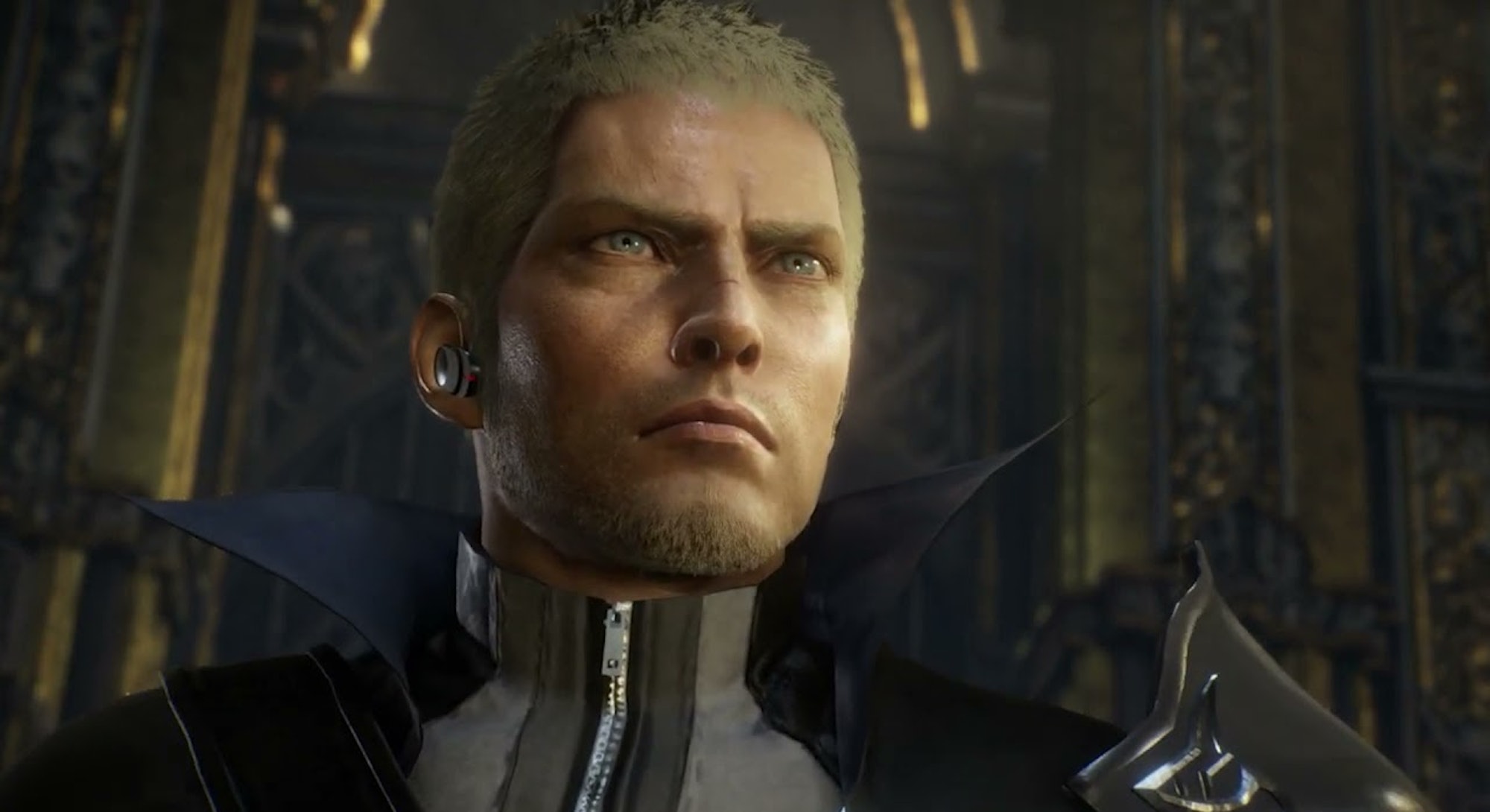 Jack Garland is a simple man — all he wants from life is to kill Chaos.

Stranger of Paradise: Final Fantasy Origin marks a significant divergence for the Final Fantasy series. The spinoff features an intense action combat system along the lines of Nioh or the Dark Souls series. What’s really drawn people’s attention, however, is the absurd dialogue and over-the-top characters that have spawned countless memes.

At the heart of all this is Jack, a very angry man voiced by Mocean Melvin, a longtime voice actor who’s worked on a bunch of true-crime series, Discovery Channel’s Shark Week, and has been the voice of the NFL Network for the last 12 years. Despite all that experience, he’s a relative newcomer to gaming voiceover work.

But he took to it like a duck to water.

“Oh, this is totally in my wheelhouse. I can do this. You want me to scream something really aggressive at the top of my lungs? I can do that,” Melvin tells Inverse. “By the end of a lot of these sessions I'd be in a flop sweat, with my shoes off, hair messed up, red in the face, and exhausted. But it was an absolute blast to do that.”

Inverse spoke with Melvin and Stranger of Paradise’s voice director Keith Arem about everything from killing Chaos to fist bumps.

When you walked in the first day, what kind of direction were you given?

Melvin - I had a character description and a couple sketches of the character, so I had a pretty general idea of who this guy was, and that he had a very strong intention to kill this Chaos guy. I just learned that it was a Final Fantasy game before I came in.

He doesn't know a lot about his own history, so as an actor, and as a character, it was kind of limited in terms of what I knew about him. But it was really, really clear that this guy Chaos had wronged him in some way, and he was going to do everything that he could to find and kill this guy.

Were there any previous Final Fantasy games or performances from English actors that you looked to as inspiration?

Melvin - One of the references for the audition was Gladio in Final Fantasy 15. And I was happy because I actually know this guy. There were a couple of other characters who had a very gruff tone and flat deliveries. I got quite a bit of great information for Jack's delivery from those references.

Did you have any idea that this game would spawn so many memes?

Melvin - I don't think anybody knew that people were going to react the way they did. In hindsight, it makes sense. But we didn't really play it in any kind of tongue-in-cheek way. We played it serious.

We were just like Jack, trying to complete our mission — get the lines out and do these characters justice.

“I choked up when I watched that trailer for the first time.”

Arem - It's a very organic process, so when we're working with the teams in Japan, and the American cast here, we love the evolution of the characters as it happens. because we sort of go through the game in a linear fashion. Jack starts with this lack of knowledge, and this lack of memory — it’s a great blank slate to work with.

That's one of the things I love that Mocean brought to this — Jack’s got this disoriented memory that he knows he has to do something and he's so vicious in that determination. In those first trailers, when that was repeated, people loved it — and loved to make fun of it —because he was so singular in his mission. We loved it too, because we were just doing the very beginning of the game at that point. So we kind of got to evolve with the character as the audience learned about him, and as it became this deeper mystery.

By the end we had some of the cast in tears. It was actually very emotional — we really went for it.

There are a couple moments where Jack plays music on his phone. When you recorded the lines for the scenes, did you know what songs he was going to be playing?

Melvin - We didn't. Those musical cues, especially Frank Sinatra, were a really, really wonderful surprise. Some people might have been shocked in the moment, but in retrospect, it all makes really wonderful sense.

I watched a lot of trailer reaction videos, and even I choked up — I'll be honest — when I watched that trailer for the first time. Especially that moment when Jack looks up into the camera, my own personal reaction went from shock to being just completely swept up in the emotion of it.

Anger is kind of Jack’s defining characteristic. How did that shape your performance?

Melvin - You know, it actually came pretty easily. Not because I'm an angry person, but in my career, I'm actually pretty new to video games. I did Tony Hawk's Proving Ground over a decade ago, but the majority of my career has been commercial promo and narration.

Arem - The amazing thing was that because Mocean is fairly new to the gaming voiceover community, it really played into Jack's character. Everyone was really intrigued when they heard Mocean’s voice because it has this depth about it, and this mystery built into his voice, which is really cool because there's this thoughtful, pensive, angsty kind of thing behind it. Mocean is the sweetest guy you'll ever meet — and he's got this voice that just sort of lures you in.

Things change pretty dramatically for Jack right near the end. What was it like recording those final moments?

Melvin - I remember that session really well, and I remember the anticipation before that big climax. The experience of this character has been one of the funnest, if not the most fun VO experiences I've ever had. And that day was the most fun that I had in the entire process.

By that point we had recorded everything else, but there were still some things that were being revealed to us about this story. Just the absolute level of energy and aggression made for such a great climax for the game and the recording experience.

“We played it serious.”

Now that I’ve played the game, seeing how those guys used all of it — I mean, I had chills. I had to literally pause, and catch my breath, stand up, and shake out before I sat down and played the rest of it.

Arem - I think as Mocean sort of evolved as a voice actor in the game, his character was evolving too. At the end of all those months, Mocean was a much different actor when it came to his vocal performance. He's been doing voiceover for years, but doing voiceover for games is a very technical sort of skill, the way we time out our lines and the volumes and the pacing.

We strategically scheduled that session, knowing we still had things to reveal. A lot of those emotions were genuine, that's why it was so cool.

Is there any single line or moment that stands out to you as your favorite?

Melvin - For me, there's a moment in the game — it's not during even one of the cutscenes — where Jed has just revealed some deep thing about his character and his intentions, and he just kind of keeps prattling on, and Jack has already kind of dismissed him by this point. He is an angry single-minded guy, but he definitely has a sense of humor, and it comes out in these small, very subtle, wonderful ways.

I'm not quoting this verbatim, but as Jed keeps talking at one point, Jack says something like, ‘you don't have to say everything you think, you know.’ I felt like that really sums up a lot of his character. He loves these guys, he really does. But he sort of treats them like children. He realizes they’re loud and annoying sometimes and every once in a while he just wants to say, ‘Just do your job and savagely kill these monsters with me.’

Do you think voice acting in games is something you’ll continue to pursue? Would you want to return to play Jack again?

Melvin - Absolutely. On all fronts. This has been so fun. Particularly with Jack, it's a good thing that there are a lot of like, loud, aggressive characters in video games. My passion is voiceover in general — I love everything about it, and I feel so fortunate that this is the gig I get to do for work. I had no idea that I would enjoy this as much as I have.