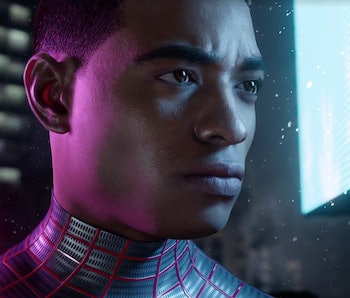 On June 11, Sony finally unveiled the first in-depth look at the long-awaited PlayStation 5, and among the early highlights of the hour was Insomniac Games' follow-up to its 2018 smash-hit, Marvel's Spider-Man. Spider-Man: Miles Morales comes to PS5 in late 2020, making it a PS5 launch title. It stars the second man to assume the role of the webslinger, and the star of the acclaimed animated film Into the Spider-Verse. But the actual scale and scope of the game have been a source of confusion ever since the reveal.

Is Spider-Man: Miles Morales a sequel? An expansion? Here's what we know.

UPDATE 1 — 6/12, 9:25 am ET: We thought Miles Morales was a sequel to Marvel's Spider-Man. Turns out, it's only an expansion of the 2018 game. Womp womp, indeed. SIE Europe head Simon Rutter told the U.K.'s Daily Telegraph, "I guess you could call it an expansion and an enhancement to the previous game.” (Thanks, VGC.)

UPDATE 2 — 6/12, 12:18 pm ET: The plot thickens. According to Bloomberg's Jason Schreier, Miles Morales will be kinda like Uncharted: The Lost Legacy. It's not Marvel's Spider-Man's equivalent of Persona 5 Royal, as the Telegraph report earlier seemed to suggest.

The trailer shows a brief glimpse of a costumed hand reaching out, sparking with flames. It's clear it's some kind of Avenger, which led us to believe this was a teaser for the previously announced Square Enix Avengers game. You can check out the trailer below.

However, the shot soon pulls back to a super-suit revealing a character's face, and it's not our pasty-faced Peter Parker. Judging from his costume, this won't explore Miles's origins like Into the Spider-Verse, but will instead follow the character as he's further along in his superhero career.

Does this mean the true sequel to Marvel's Spider-Man will go back to Peter Parker as the main character? It certainly seems that way, and it's a little disappointing after thinking we were getting a full-fledged Miles Morales game.

Unfortunately, we didn't see much gameplay for Spider-Man: Miles Morales during the June 11 Sony reveal, but the visuals of Miles that we did see were positively stunning. The level of detail on his face and the subtle lighting on the textures of his black and red suit look photorealistic.

What excites you most about next-gen consoles? Take our poll!

The 2018 game saw Spidey challenge the supervillain Mister Negative's attempt to take control of New York City's criminal underworld. Naturally, he's also got to deal with the more humdrum challenges that come from being Peter Parker, too. Miles is also a playable character in the first game.

As of August 2019, Marvel's Spider-Man sold more than 13.2 million copies. That makes it the number-two PS4 title of all time, a shade behind Naughty Dog's Uncharted 4, which had sold more than 16 million copies as of October 2019. Given the enormous popularity of the character and the abundant supply of Marvel Comics source material to pull from, a sophomore outing from Spidey seemed inevitable, but it's a very welcome addition to the PS5 library.

While Microsoft has foregrounded transferable games and backward compatibility in the run-up to the launch of the Xbox Series X, Sony has doubled down on its unique exclusives. In mid-May, the company revealed PlayStation Studios, its new Marvel-esque umbrella for all its unique IP across various forms of media, including games, movies (like the oft-delayed Uncharted movie), and TV shows (like the Last of Us HBO series).