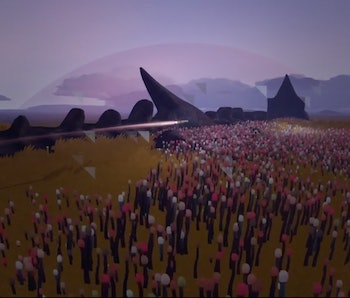 The June 11 reveal of new games coming to PlayStation 5 saw a few rumors pan out and some others fade to dust. There were also quite a few surprises and new mysteries in Sony's reveal event, notably the cryptic space adventure, Jett: The Far Shore from SuperBrothers, creators of Sword & Sworcery EP.

The game has an artsy, indie feel, with stylized triangles and polygons set against expansive space environments. The trailer opens in a sepia-toned society populated folks in broad black hats and sleek dark horses. It doesn't seem to be an advanced society, but they either have access to space travel — or are visited by an alien society. Presumably, all hell breaks loose, because you're then tasked to "carve out a future for a people haunted by oblivion." Whoopsy.

You can check out the enigmatic trailer below.

A press release accompanying the reveal event offers a bit more detail on the story players can expect.

Jett invites you on an interstellar trip to carve out a future for a people haunted by oblivion in this cinematic action adventure.

As scout and ‘anchorite’ Mei, be the first to deploy to a mythic ocean planet. Take the helm of a ‘jett’ and explore a vast unknown – skim low over waves, roar up pristine coastlines and carve through otherworldly woods. Adapt to an intricate, systemic open world and persevere through adversity alongside an intimate ensemble cast in this story of courage, wonder and regret.

SOAK in an sea of music and 3D sound, with a breathtaking score by Scntfc.

DEPLOY to the surface of a mythic ocean planet: skim up undiscovered coastlines, inspect indigenous flora and fauna, adapt to new perils, and problem-solve tough obstacles using your jett’s array of scientific tools.

INVESTIGATE the source of ‘the hymnwave’, an interstellar invitation that propelled a people to look beyond their troubled skies and across the sea of stars, for salvation.

RENDEZVOUS at ‘Ground Control’ and get to know fellow scouts in relaxed first-person sequences, as the scouts struggle together to “satisfy ‘Jao’s directives’” and acquit themselves with honor.

DELVE DEEPER after the campaign’s culmination to explore a robust mysterious endgame where the open-world immersive sim elements flourish.