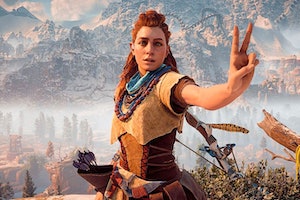 PlayStation’s newest studio has four surprising games in the pipeline.

On September 8, 2021, Head of PlayStation Studios Hermen Hulst confirmed that Sony Interactive Entertainment had acquired Liverpool-based developer Firesprite (this followed the Housemarque and Nixxes acquisitions in July). Firesprite has more than 250 employees and is known for games like The Persistence, Run, Sackboy! Run!, and the Playroom series.

Sony has a strong relationship with Firesprite, but the developer isn’t as widely known as a studio such as Housemarque, which made Returnal. Firesprite also didn’t show anything at the September 9 PlayStation Showcase, so Sony’s plans for the studio are a mystery, but it must be something big, right?

After digging through the various job listings on Firesprite’s website — along with some leaks — we’ve turned up four games (or game genres) the studio is currently working on. Let’s dive in.

Horizon Forbidden West will be released on February 18, 2022. The VR game is reportedly not connected to it.

On the 74th episode of the XboxEra podcast posted on September 12, Nick Baker (aka, journalist and leaker Shpeshal_Nick) claimed Firesprite is working on a VR game set in the universe of Horizon Zero Dawn and Horizon Forbidden West. A since edited job listing for Senior Development Manager corroborated this leak with a very telling description (emphasis added):

“We're looking for a Senior Development Manager to assist with all aspects of planning and delivery on a VR action-adventure project adapted from one of the most original and successful multimillion selling console IP titles in the last 10 years. This is an exceptionally exciting project, partnering with the IP holder to create a whole new chapter in the exciting and highly original universe they have established, utilising the full immersive capabilities in VR to build a new narrative for fans and newcomers alike.”

The Horizon series fits that description perfectly, and there will undoubtedly be interest in another sequel following Forbidden West’s release in February 2022. With a new version of the PlayStation VR on the “horizon,” there’s never been a better time for Sony to scoop up the studio it needs to bring Aloy into virtual reality. The leak might also explain why the job description was edited to be much vaguer.

Even if it doesn’t turn out to be Horizon, Sony has plenty of other relevant franchises like God of War and Uncharted that Firesprite could tackle. That’s just speculation, but the thought of playing as Aloy or Kratos in VR is enough to make us pre-order a new PSVR headset on day one.

Firesprite Managing Director Graeme Ankers was coy about the studio’s VR projects in a September interview with GamesIndustry.biz.

“We've got experience on a lot of VR projects and on a lot of non-VR projects throughout our history,” he said. “It's about being brave and creating those experiences that really showcase what any platform feature can deliver, and the best experience for the game, of course.”

Narrative game series like Life is Strange are pretty successful, and it looks like Sony wants a slice of that pie. Several job listings indicate that Firesprite is developing a dark, story-driven narrative adventure game. Now that Sony owns Firesprite, it’s likely that this game will be a PS5 exclusive.

Here’s what a job listing for Development Director at Firesprite reveals (emphasis added):

None of the job listings confirm if this game is based on a known franchise or a new IP, but we know from a Senior Level Designer job description that the game will feature a branching narrative where players have to make significant choices. That description also hints the game will include puzzles.

When it comes to its story, we don’t know anything. Ankers told GamesIndustry.biz, “There's a drive for us to create something culturally significant that will touch millions of people and tell a story that really has where we're from at the heart of that.” A literal reading of that statement suggests it could take place in northern England, where Firesprite is based, though we won’t know if that’s what Ankers meant until this game is unveiled.

This project will fill a considerable gap in Sony’s lineup, as it has always struggled with multiplayer games. The Development Manager job listing confirms it will be a new IP:

“The project is a huge multi-platform next-generation action shooter experience with a heavy focus on Games as a Service, looking to bring unique mechanics and a bombastic tone to blow the doors off and bring something new to the genre!”

Firesprite is also looking for a Senior System and Economy Designer, and that description asks for experience with “F2P economy design,” suggesting that this game could be free-to-play. It would also be a chance for Firesprite to experiment with the PS5’s technology, which both Hulst and Ankers touch on in their GamesIndustry.biz interview.

“It is definitely true that Firesprite is a team that loves to tinker with a platform,” Hulst said. “They love to experiment, to take something and toy with it. In a sense that is maybe a little similar with Team Asobi, not to suggest that they're going to make similar games, but in their own way. They are a flexible team, in that you can give them any platform and they love that challenge.”

Firesprite was working with Cloud Imperium Games on Star Citizen, an extremely ambitious crowdfunded sci-fi game that has yet to release. Theaters of War is a massively multiplayer “combined arms” mode where players fight over multiple objects on the ground and in space.

Theaters of War currently does not have a release date, like the rest of Star Citizen. It is unknown if Firesprite will continue work on this mode following the Sony acquisition, though it still has one live Environment Artist job listing related to the project. Inverse reached out to Cloud Imperium Games, but the studio declined to comment.

We also reached out to Sony for comment on all four titles featured here, but it declined to comment.

Whether Firesprite is still working on Star Citizen or not, it’s clear the studio has quite a few ambitious projects in the pipeline. Now, we have to wait and see how they all turn out on PS5 to know whether or not this acquisition was worth it for Sony and its fans.

Got a scoop or a news tip about video games? Send it to me at tomas.franzese@team.inverse.com.