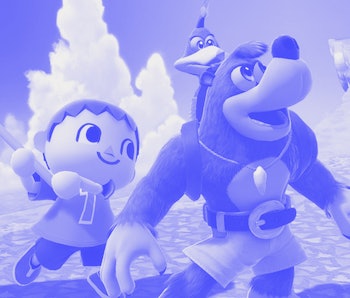 Nintendo’s Animal Crossing: New Horizons Direct on February 20 gave fans of the upcoming life-sim game an in-depth look at what to expect ahead of the game's March 20 release date. But the cute AF stream might have also dropped a juicy hint about one of the DLC fighters that will be included in Super Smash Bros. Ultimate’s upcoming Fighter Pass 2 DLC bundle.

The next six Smash Ultimate DLC fighters have not been unveiled, but during the Byleth announcement game director Mashahiro Sakurai said they’ve already been decided. In a subsequent interview, Sakurai acknowledged the game has too many Fire Emblem characters, then revealed that he doesn’t always have full creative control over which DLC characters get added to the Smash Ultimate roster.

That could suggest that some of the Fighters Pass 2 cast additions could ignore roster diversity in favor of corporate synergy and cross-promotion of Nintendo’s biggest franchises, like Animal Crossing. Fighter 76 might not be from New Horizons, but it feels likely that one of the upcoming six will be from the island-themed life simulator.

Animal Crossing might not get the same recognition as Nintendo’s most iconic franchises — like Super Mario Bros. or Legend of Zelda — but it has built a devoted fanbase over the years. 2016's New Leaf (2016) became the series’ best-selling title at nearly 12 million units in 2018 and Animal Crossing: Pocket Camp for mobile raked in $50 million that same year. The hype around New Horizons could make it a hit.

Despite the franchises’ success and upcoming new title it still only has two representatives in Smash Ultimate: Isabelle and Villager. Isabelle was announced as a newcomer to the game in September 2018 and Villager has been in the series since the release of Smash Bros. 4. Other series like Pokémon have up to eight in the fighting game.

Nintendo could try to balance out how its most popular series are represented in Smash Ultimate. New Horizons will have nearly 400 unique villagers, which gives Nintendo a lot of options when it comes to picking a potential Animal Crossing DLC character. Tom Nook, Celeste, and Labelle could be some possible options. But even if Nintendo does decided to add more characters from the life-sim, it probably won’t be the first character of Fighter Pass 2.

The development timeframe coincides perfectly, plus Nintendo has added a Pokémon to Smash from the last two generations of the series: Greninja and Incineroar. So there’s no reason to believe they’ll stop now.

But don’t be surprised if the company announces an adorable newcomer from New Horizon later this year.