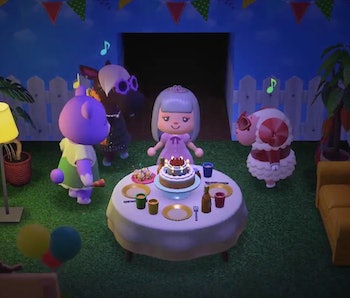 Exactly one month before the game's release, Nintendo held a Direct that was all about Animal Crossing: New Horizons, the latest entry in their popular (and adorable) social-sim series. As the first new Animal Crossing game in seven years, fans wanted to know what new features New Horizons will bring to the table. Today's Direct did just that, confirming that free-post launch updates, fast travel, and more are coming to the game.

The latest Nintendo Direct started by going over the basics of Animal Crossing. Like previous games in the series, players move to a new area, design their home, interact with villagers, and manages what goes on in that area. Players start with a tent, but will soon be able to upgrade to a house that more can be put in. Animal Crossing: New Horizons spices things up by bringing players to a deserted island as part of "Nook Inc.'s Deserted Island Getaway Package" and by putting more of a focus on crafting elements.

That's all familiar enough, though there were still plenty of cool reveals. Players will be able to not only choose which island they want to go to, but which hemisphere they want to live in, which will change the order in which the seasons appear. Each season has a unique aesthetic and items, so the hemisphere feature is a welcome new addition. You can also now choose where all of your villagers live. Resident Services is where Tom Nook, Timmy and Tommy set up shop. They can teach you how to craft items, give tips, or purchase items you're looking to sell. Individual items can also be tweaked with custom designs and color schemes.

Animal Crossing: New Horizons also features an airport to invite other players to visit your island, or go to theirs. You will also be greeted with an island-wide broadcast by Tom Nook at the start of each day. "The Nook Mileage Program" will also give players specific objectives to complete to gain bells and other rewards. Players will occasionally find castaways that wash up on their island, and you can help get them home. Surprisingly, Animal Crossing: New Horizons will also feature fast travel back to your home.

Nook Miles Tickets allow players to go to mystery islands that have a ton of items for players to find and pillage. Islands support up to eight villagers, with the leader directing what the group does. The Nintendo Switch Online app is also getting a Nook Inc. app that can be used to scan QR codes. This gives players the ability to import designs from Animal Crossing: New Leaf and Happy Home Designer. The app should be updated in March around the game's launch.

After going over the basics, they unveiled the stuff that will slowly be doled out to players over the course of the game. It will eventually feature the museum, shop, tailor, and campground areas that players have come to expect from the series. While it starts as a deserted island, it should end up looking like a traditional Animal Crossing village. This is where Isabelle comes in, as she can help you change some features of your islands.

Animal Crossing: New Horizons islands will also occasionally get tourists, which will expose players to new items and different cultures. They also plan to add Season guests and more through free post-launch updates. The island definitely seems very customizable, as players will be able to build roads and bridges and even modify land around rivers and cliffs.

Finally, the Direct ended with an Animal Crossing: New Horizons FAQ section. They confirmed that you can play with up to eight other people on one shared island, with each Switch user being designated one resident. The game will also support amiibo figures and cards, which can be used to bring new villagers to your island and do photoshoots with them. You can also visit the islands of other players even if you aren't friends, though some features will be locked. It won't feature cloud saves, but it will allow players to restore their data if there is theft or loss involved.

They also reiterated that they will continuously be updating the game, with a "Bunny Day" event being added on launch day. Animal Crossing: Pocket Camp players should also eventually be able to get items by also play New Horizons.

If you want to watch the presentation, you can find it embedded below.

More like this
Gaming
2 hours ago
Everything we know about Tears of the Kingdom
By Willa Rowe and Joseph Yaden
Gaming
2 hours ago
Kirby’s Return to Dream Land Deluxe Is Better With Friends
By Willa Rowe
Gaming
1 hour ago
All 24 Game Boy and GBA Games Coming to Nintendo Switch Online
By Jess Reyes
LEARN SOMETHING NEW EVERY DAY.
Related Tags
Share: