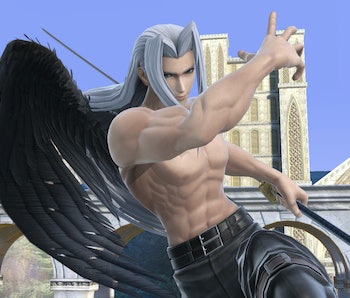 Sephiroth looks like a beast in Super Smash Bros. Ultimate, judging from Nintendo's showcase of his gameplay on December 17. The presentation broke down all of Sephiroth's moves, revealed the latest roster member's release date, and detailed how players can potentially unlock Sephiroth early.

Here's everything you need to know about the One-Winged Angel's arrival in Super Smash Bros. Ultimate.

When is the Super Smash Bros. Ultimate Sephiroth release date?

Officially, Sephiroth will become widely available in Super Smash Bros. Ultimate on December 22, 2020, as part of either Fighter Pass 2 or Challenger Pack 8. Fighter Pass 2 is already available for $29.99, and will immediately grant you access to other DLC fighters like Min-Min from Arms and Steve from Minecraft. Meanwhile, Challenge Pack 8 can be pre-ordered from the eShop for $5.99 and includes Sephiroth, his stage, and his music.

If either of these is purchased, players will get full access on December 22. That said, they actually have a chance to unlock him early if they do the Sephiroth Challenge, which should be available to them in-game.

How to unlock Sephiroth early through the Sephiroth Challenge

If you've already purchased Sephiroth, Nintendo is giving you a chance to play as him early. Those who own Fighter Pass 2 or Challenger Pack 8 and have a fully updated game should now see a limited-time mode called Sephiroth Challenge. This temporary in-game event runs from December 17 until 8 p.m. Eastern on December 22.

In this mode, players can fight Sephiroth early in an easy, normal, or very hard fight. The battle will take place on his new stage and feature the new music tracks that come with Sephiroth as well. All players have to do is beat Sephiroth on any difficulty level to access everything early.

What comes alongside Sephiroth in Challenger Pack 8?

Challenger Pack 8 also includes a brand new stage called Northern Cave, based on the final battle of the original Final Fantasy VII. The imagery and events going on in the background of the stage should be recognizable to any fan of the classic RPG, and is a very good fit for Sephiroth's unique stage. Sephiroth also comes with 9 Final Fantasy VII music tracks:

Sephiroth also has a new classic mode route where he fights every boss from the game. The P2 version of Cloud is also getting a unique move called Omnislash Ver. 5.

Like every fighter in Super Smash Bros. Ultimate, Sephiroth features a dynamic move set that's full of unique moves that also serve as references to other games. Director Masahiro Sakurai breaks down the moveset thoroughly in Sephiroth's latest showcase, but we'll also break down the move set for you here.

Many of Sephiroth's attacks are focused around his sword. His slash deals the most damage just above the middle of the blade, while his stab deals the most damage at the tip. His most notable standard attack is a down-air called Hell's Gate, which sees Sephiroth plunge his sword into the ground beneath him as he did in that iconic Final Fantasy VII death scene.

Sephiroth has relatively weak throws but makes up for it with some interesting special attacks. His neutral special can be charged by holding down the B button. With no charge, Sephiroth uses Flare, with a little bit of charge it becomes a more powerful Megaflare, and charging it fully activates the powerful Gigaflare. His side special is Shadow Flare, which will circle the opponent before homing in on them and exploding. It can be stacked up to 5 times.

His up special is Blade Dash, which will send him upwards at an angle. That said, players can actually hold B to access another attack called Octoslash, which hits opponents eight times. His down special is Scintlila, which Sephiroth can use to counter opponents. Interestingly, it can still damage opponents even if no damage is taken. His Final Smash is called Supernova, and see him summon a Meteor to wipe out the planet. It deals lots of damage and give a unique status effect to each opponent.

When Sephiroth takes a lot of damage, he will enter his Winged Form. One wing will appear on his back during this, and Sepiroth will get boosted strength and speed, and extra midair jump, and gets super armor during Smash attacks that makes it hard to knock him around. Players lose it after dying or knocking out an opponent. It will also appear at a different percentile of damage depending on if you are winning or losing in terms of stock.