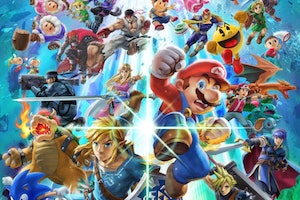 Super Smash Bros. Ultimate has one last fighter in Fighers Pass Vol. 2, and the fabled character is set to be revealed during a special Sakurai Presents livestream on October 5 at 10 a.m. Eastern. Hype remains high for the reveal as this could be the last new roster addition to the game for the foreseeable future, so we’re here to offer our predictions for six familiar faces that might be joining the fray in the coming weeks. Are Sora, Goku, and Jonesy possibly joining the battle?

We’ve discussed the possibility of Sora joining Smash Ultimate in prediction-based articles before, but this potential roster addition seems more likely given 4chan leaks that have recently reemerged. In July 2021, an anonymous poster wrote, “I work for Disney music, [and] Nintendo called last week to request rights to several tracks from Kingdom Hearts to use in a ‘digital event’ on October 5.” We now know that date to be significant, as the exact day the final Smash character is set to be revealed. Does this mean Sora’s coming to Smash?

It seems somewhat likely given the alleged request for “several tracks,” but let’s also remember that licensed tracks from Kingdom Hearts could also relate to Mii Fighter costumes too. Sora in particular would work well as a Mii Swordfighter, so maybe Sakurai intends to soothe fan demand by including the Keyblade wielder as a skin instead. Sora in Smash is looking fairly feasible these days, but keep your expectations in check as to how the character might be featured.

Waluigi is another character that’s been discussed to death with regards to a future in Smash Ultimate, and, while I wouldn’t say him being the final character in the Fighters Pass sounds especially likely, he’s the top pick for someone that I personally would like to see. As many have pointed out, Waluigi is the only core Mushroom Kingdom mainstay to not have a Smash rep.

That’s a sin when you think about all the silly and god-awful moves this guy could potentially have. Who wouldn’t love to see Waluigi toss a rose to his foe as a Final Smash? His lanky stature also means he could play differently from all the other Mario clones. Waluigi has made the full transition from a meme into a truly beloved character. We’d love it if Nintendo acknowledged his newfound fame with a little Smash love.

We know bringing Jonesy to Smash Ultimate would be a very divisive decision, but it also feels pretty plausible. After all, Fortnite remains one of the biggest games in the world, so why shouldn’t it be included in the industry’s premier crossover brawler? It’s obvious there’s a contingent of core gamers who might vomit at the thought, but there are lots of younger players who’d love to see him there.

The Fortnite universe meshes well with the kid-friendly aesthetic of Smash. As a fighter, Jonesy could wield some of Battle Royale’s most popular weapons. The main question I have is if I’d rather see a Drum Gun or Pump Shotgun in his loadout. Fans also know Jonesy is a character with lots of different looks as well, and it’d be fun have those as alternate costumes for the fighter. Smash is a series of the gaming industry’s biggest icons. Love it or hate it, Fortnite has achieved that status.

We’ve heard all the “rules” about why Goku can’t ever be a Super Smash Bros. character, but, especially when it comes to being the very last fighter for Smash Ultimate, some of those preconceived notions should be thrown out the window. Given that he was likely one of the top-voted characters in Nintendo’s 2015 Smash Ballot poll, why not throw fans a bone as the title’s last major DLC drop?

Fans have long understood that Super Smash Bros. is co-developed by Bandai Namco, the current license holder for Dragon Ball games. Given this established relationship, it seems like it’d be an easy sell to get the series’ main character into Smash. Over the years Goku has become as much of a mascot for video games as he is for anime. A spot in Smash would be a nice acknowledgment of that fact.

Last year we published an editorial suggesting why Tifa would be a perfect fit for Smash Ultimate, and we still believe that to be the case. She’s a beloved character from an adored game that will still be relevant for years to come. Given that Cloud and Sephiroth from Final Fantasy VII are already in Smash Ultimate, the ties already exist between Square and Nintendo to include Tifa too.

After playing Final Fantasy 7 Remake, it’s obvious just how appropriate for Smash her moveset potentially is. She could be an up-close brawler in the vein of Little Mac, but with a dash of Final Fantasy magic to offer up some distance potential. Adding Tifa wouldn’t offer as much of a pop as some of these other options, but she has more than enough fans to make her a fitting final fighter.

Master Hand has always been the big bad of the Super Smash Bros. series, so it’d be poetic to squeeze them in as the final DLC character for Super Smash Bros. Ultimate. We imagine doing so would create a particularly unique balance challenge for Sakurai to overcome, but we have full faith that he’d be up to the task. A lot of folks would probably prefer a more off-the-wall last fighter, but, considering Master Hand is an iconic final boss, the door seems open for it to happen.