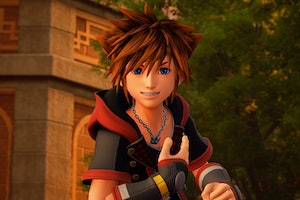 possibilities for the final Smash fighter

We’re coming to the end of the road. Super Smash Bros Ultimate director Masahiro Sakurai announced during June 28th’s Sakurai Presents livestream that Kazuya Mishima will be the penultimate fighter to join the 2018 game. There will be no third Fighters Pass.

With the Tekken icon a few hours away from his expected debut, we’re here to offer our own insight on the matter. These are the six leading candidates for Smash Ultimate’s last fighter.

It goes without saying that everyone’s favorite Keyblade wielder would be a perfect fit for Super Smash Bros. Ultimate. After all, Smash is developed in part by Sora Ltd., so why not put a nod to that namesake in the game? He’d also function well as a sword-based character, which Sakurai tends to prefer, and Sakurai has said in the past that he’s a fan of the Kingdom Hearts series.

These ingredients make Sora a shoo-in as a DLC fighter, and fans have been demanding it for years. If Nintendo’s intent is to send the last Fighter’s Pass out with a bang, this is one way to do it. We suppose it’s also possible Sora could get the Dante treatment and be added as a Mii Swordfighter costume as a compromise, but, especially with regard to magic, Sora has so much more potential than that as a full-featured fighter.

Leading up to E3, Master Chief was the top prediction being offered by fans as the next Smash Ultimate fighter. That obviously didn’t happen given Kazuya’s arrival, but that doesn’t mean John-117 can’t make a splash a bit later than expected.

After all, with Halo Infinite still projected for a holiday 2021 release, bringing its hero to Smash could serve as a strong marketing beat for both Microsoft and Nintendo alike. The two hardware makers have been playing nice given the small collection of Xbox exclusives quietly making their way to Switch, and Microsoft was even kind enough to loan Banjo-Kazooie and Minecraft Steve to Sakuari already. Given that established relationship, one last Xbox rep doesn’t seem that impossible.

The Smash Ultimate Fighters Passes have largely focused on third-party characters, but it doesn’t seem all that unlikely Nintendo may want to dig back into its own well of known properties to cap off the festivities. When it comes to Nintendo characters that fans would love to see in the game, Waluigi is often at the top of the list.

While initially maligned back in 2000 after his Mario Tennis debut, Waluigi has since gained meme status and would absolutely have a big impact as the final Smash Ultimate character rep. It would even make some marketing sense to do it soon, too, with WarioWare: Get It Together coming to Switch this September. We just hope Nintendo opts to make his moves as weird and delightful as possible if this prediction comes true.

Another major marketing beat for Nintendo this fall is Metroid Dread headed to Switch in October. We don’t know that much about the game quite yet, but its trailer places lots of emphasis on the robotic foe called EMI that chases Samus through the environment.

Smash Character reveals are often tied to new Nintendo games, so putting a version of EMI in Ultimate would be one more way to get players hyped for the next Metroid. The series hasn’t sold as well as some other tentpole franchises, so Nintendo might see a Smash tie in as something to help the title along. It might also explain why we have to wait for further reveals, so we can truly understand who this robotic character is.

The Super Smash Bros. series has always focused on celebrating the industry’s biggest icons, and Crash Bandicoot certainly fits that bill. He’s been a top-tier figure in games since 1996, and PlayStation fans agree it was an absolute sin the character wasn’t featured on the PlayStation All-Stars roster back in 2012.

It’s time for Activision to make good on its mistakes by bringing Crash to Smash. Especially considering the character is still relevant following the release of Crash 4 last year, the window remains open for some spinning, attitude-drenched goodness to make its way to Ultimate. If this series truly is a celebration of games history, Crash Bandicoot deserves to be part of it.

An intriguing fan theory suggests Frisk, the main character from Undertale, might be the final DLC character for Smash Ultimate. Supporting character Sans is already in the game as a Gunner Mii costume, and Sakurai and Toby Fox seem friendly enough for it to happen.

However, looking at the last couple Smash Ultimate character reveals, namely Sephiroth and Kazuya, a story is being told that suggests the Smash universe is in rough shape. Sephiroth has apparently killed Galeem, and now a literal Devil has joined the competition to fight alongside him. In the face of all these monsters, Frisk could emerge as a light in the darkness just like in Undertale. The question is, are they filled with enough Determination to take down two of gaming’s biggest baddies?