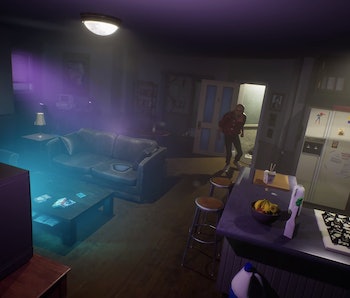 There are plenty of terrifying horror games out there. Whether it’s Resident Evil or Five Nights at Freddy’s, there’s a lot to scream about for fans of the genre. But there’s a new video game coming out that could make even the most hardened horror veteran shutter. I’m talking about something so scary that even reading it will haunt your dreams.

It’s no joke; there is a horror game based on the classic sitcom coming and it looks remarkably unsettling. Sinfeld Remastered is a new game by developer Rare Bird Games that takes inspiration from the show to create a literal nightmare. If you haven’t already closed this article in fear, read on to learn all the spooky details about the most puzzling gaming project ever conceived.

Let’s start with the very strange basics. Sinfeld Remastered is a horror video game that’s set in the world of Seinfeld. It features iconic locations like Jerry’s apartment and the show’s classic diner. Of course, the game is tonally is as far from the show as possible. The characters have been replaced with literal monsters that roam around. As you can guess, this isn’t canonical with the show.

The game itself is actually a remake of a fan project created in the game Dreams. The PS4 game allows players to create their own games and Rare Bird took that opportunity to destroy Seinfeld. Sinfeld Remastered is a new version of that project that takes it out of Dreams with the help of the Unreal Engine. That’ll ensure that the game lives on long after Dreams’ servers shut down.

Rare Bird Games described the project as an “action horror comedy parody” and compares it to games like PT and Resident Evil.

Is there a trailer for Sinfeld Remastered?

Yes, but I will warn you: it is truly an odyssey. The video is, in a word, mystifying. It features a baby-headed protagonist running around the world of Seinfeld while references to the show fly by. At one point, he encounters a shed labeled “Festivus Supplies” that houses some kind of mystical pole. You really just need to see it for yourself to believe it.

What is Sinfeld Remastered’s release date?

At the moment, the game doesn’t have a planned release window. Rare Bird says the game is in “full on production,” but it doesn’t mention what date its targeting. Inverse reached out to Rare Bird for clarification and we will update when it responds.

What is the story of Sinfeld Remastered?

If you’re hoping this section will start to make sense of the project, think again. The trailer certainly doesn’t explain much and the game’s Patreon only makes matters more confusing.

“When little Donathan goes to visit his Uncle Jerry and pees his bed, he is thrust into an adventure of a lifetime,” reads the Patreon description. “Donathon’s journey into the Sinfeld universe is an actual nightmare... Serenity now!”

Judging by the trailer, it looks like the game is filled with its own deep lore that extends far beyond the sitcom. Though for those who are Seinfeld diehards, there are plenty of little Easter eggs to pick up on.

What platform is Sinfeld Remastered releasing on?

At the moment, the game is only coming to PlayStation 5. That makes sense considering that Dreams is a PlayStation exclusive game. Think of this as a next-gen upgrade for the peculiar fan creation.

Rare Bird Games is hoping to bring it to other platforms. One commenter on the game’s Patreon asked if an Xbox version is in the works and the developer said there’s a good chance of that happening.

“Distribution is actually a tricky beast. We want to be on every platform,” says Rare Bird Games. “Just a matter of time and space and pizza.”