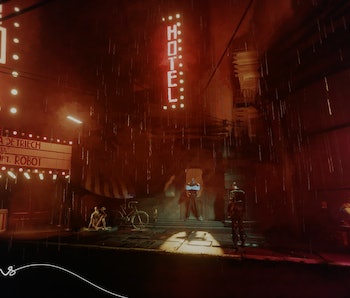 The preview embargo for Dreams — an upcoming sandbox game for the PS4 with a heavy focus on user-generated content — has ended, and the internet is awash with an infectious optimism for Media Molecule’s latest project. Game critics who demoed the game in Santa Monica and posted their previews reported some impressive features that have already put Dreams in the running for Best Game of 2018.

Though Dreams is often referred to as a spiritual successor to Little Big Planet, it has far greater ambitions than its predecessor. The big draw of LBP was user-generated content. Players could build their own levels and share them with the greater world. Dreams takes that concept even further by giving players the ability to draw their own 3D models, score music, and even craft their own logic systems, the guts that make a video game work. Basically, it’s a video game developer kit packaged inside a video game. Yo, dawg.

Garri Bagdasarov of Push Square called Dreams “one of the most ambitious and groundbreaking titles of the generation.” Rachel Weber of GamesRadar+ said she wanted her eulogy created in Dreams. Some journalists like Andrew Tarantola of Endgadget and Mike Williams of USgamer recognized that Media Molecule had a great product on their hands, but pointed out an aspect of the game which could turn it into a niche title—it’s daunting. Any artist can tell you the fear of staring at a blank canvas.

Frankly, the concept behind Dreams is ingenious. Disguising a one stop shot video game devkit is meta as hell. To my knowledge, that makes Dreams the most accessible game creation system on the market. Even a tool like RPG Maker, though very easy to use, still feels like work when building a game. Dreams actually makes the drudgery of building a video game from scratch feel like fun. Media Molecule, in a show of confidence, built the entire three-hour Dreams single-player campaign using the game’s own user tools. Theoretically, you could make a campaign just as impressive as any professional developer’s using Dreams.

But whatever you made wouldn’t belong to you. It’d belong to Media Molecule and Sony. With user-driven games like Mario Maker, players can’t upload a level unless they complete it themselves. This serves the dual purpose of deifying yourself as a platforming god and issuing a challenge to others who aspire to join the pantheon of Mario legends. Dreams lacks that motivation.

Naturally, most of what will get churned out of Dreams will be mediocre, but there’s also very little incentive for someone talented and committed to create something great. Hardcore players (or in this case, makers) will always be a niche audience, but Dreams offers very little incentive for anyone to go beyond simple tinkering. The title prides itself as being a casual, carefree outlet for creative energy, but once you reach the point of creating entirely new games, that sort of play is no longer casual nor carefree. It’s work, and that work has to have some kind of incentive, whether it’s cold, hard cash or bragging rights.

One of the developers hoped that the biggest thing that will come out of Dreams is the emergence of a new talent, some whizkid who will take it and make a new, fully developed title that eventually gets picked up by Sony. That’s certainly not impossible. Valve has made an entire portfolio of award-winning games by hiring young talent. Portal, Team Fortress 2, and Counter-Strike projects from amateur developers who were hired by Valve to take their games in-house.

Dreams is planned for release in 2018.