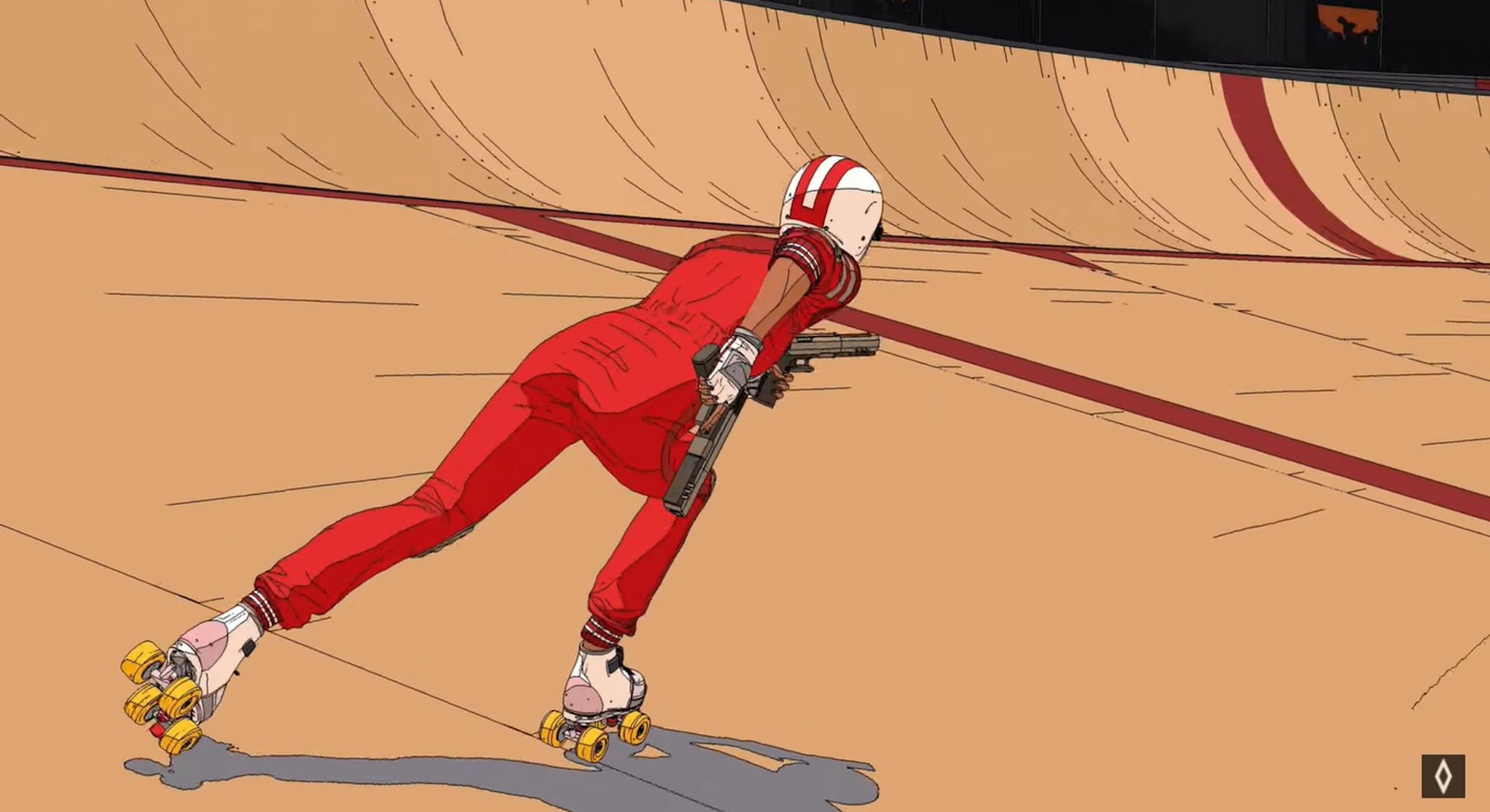 What if Tony Hawk’s Pro Skater gave you a gun?

If this is a question you have ever asked yourself, then you aren’t alone. Roll7, the developers behind the amazing skateboarding game OlliOlli World, had the exact same question. But instead of just thinking about it, the team decided to make it happen. The product is Rollerdrome.

Rollerdrome is a third-person hybrid shooter-slater that blends high-octane gunplay with fluid motion and tricks. On top of the mechanical elements, it is steeped in a cell-shaded retrofuture aesthetic.

All of this sounds like Roll7 threw in so many things to the crockpot that they couldn’t manage to make it all work. But after being let loose in the game for several hours during my hands-on preview I can say that Rollerdrome grinds along the razor’s edge in style and never loses its balance.

Let’s get ready to rumble — Roller derby is a contact sport in which players race around a track in roller skates and mercilessly ram each other down to keep their team in the lead. In Rollerdrome a 1980’s version of the future has made the logical leap that roller derby would make better television if it had more murder. Thus, the Rollerdrome was born.

An annual competition that sees competitors master roller skating and sharpshooting is now the biggest entertainment spectacle in the world. You are Kara Hassan, a rookie player hoping to live through the competition. The story is light, but as you progress through each stage you will unravel the corporate conspiracies behind the event. But first, you have to make sure you progress.

The opening tutorials of Rollerdrome feel more necessary than those of any other game because the gameplay is utterly original. It starts you off slow with basic movement, which isn’t hard to get the hang of. You do a couple of laps around the practice course and start to feel comfortable. Then you get your guns.

Shotting is a simple pull of the right trigger, and the game has a generous aim-assist that locks onto enemies when you get close enough. So, what is stopping you from just riding around, shooting enemies as quick as possible? This is where Rollerdrome’s resource management becomes so important.

There are two main things that you always want: health and ammunition. With levels filled with continuous waves of Mad-Max-looking assholes trying to shoot you down, more health is very helpful to have. But health is only dropped by eliminating enemies. Ammunition on the other hand is linked to tricks.

The better your tricks, the more ammunition gets put in the clip of your gun. Time spent on the ground is time spent losing bullets as you empty them into bodies. Every body dropped requires a trick to keep you battle-ready.

Stayin’ alive — This balancing act drives you to get better and better at the game because with high-scoring tricks you don't have to worry about an empty clip. This is like walking a tightrope and the game raises the stakes with every stage by introducing new enemies. Common thugs, snipers, and flamethrower-wielding mechs will all stand in the way of you becoming the next Rollerdrome Champion.

But your tools grow as well. With four different weapons to choose from at full strength, the possibilities of wiping the floor with your opponents are endless. However, like every other aspect of Rollerdrome this doesn’t come without its cost. Larger weapons like the grenade launcher only have two shots, while your pistols have twelve.

The ammunition for weapons is shared, meaning one grenade will deplete half of your available ammunition for every weapon. Making you think about what weapon is best fitted to each enemy. you could use two shots from the grenade launcher to kill a Poly-beam before she transports away and starts firing her overpowered laser at you, but then you will be empty and vulnerable to other enemies.

Between health, ammunition, tricks, weapons, and enemies all being managed in your head the game feels like a bullet hell. Pulling off tricks can be interrupted by a sniper shot, meaning you must keep an eye out for their red laser sight and dodge at the right moment.

With so much high-speed action going on the best asset you have at your fingertips is “Reflex Time.” By using the left trigger, you can slow time, giving you a moment to plan out your actions or pop off some quick shots. Triggering “Reflex Time” after a perfect dodge gives you even more slowed-down time and makes shots hit that much harder.

All of this makes for an adrenaline-pumping experience, one that is improved by the inclusion of a leaderboard. Each stage will give you a score based on your performance that goes up on a global leaderboard. You can improve your score by getting faster, building up combos, and completing the ten challenges that every stage has.

Rollerdrome is shaping up to be one of the most unique and exciting action games of the year.