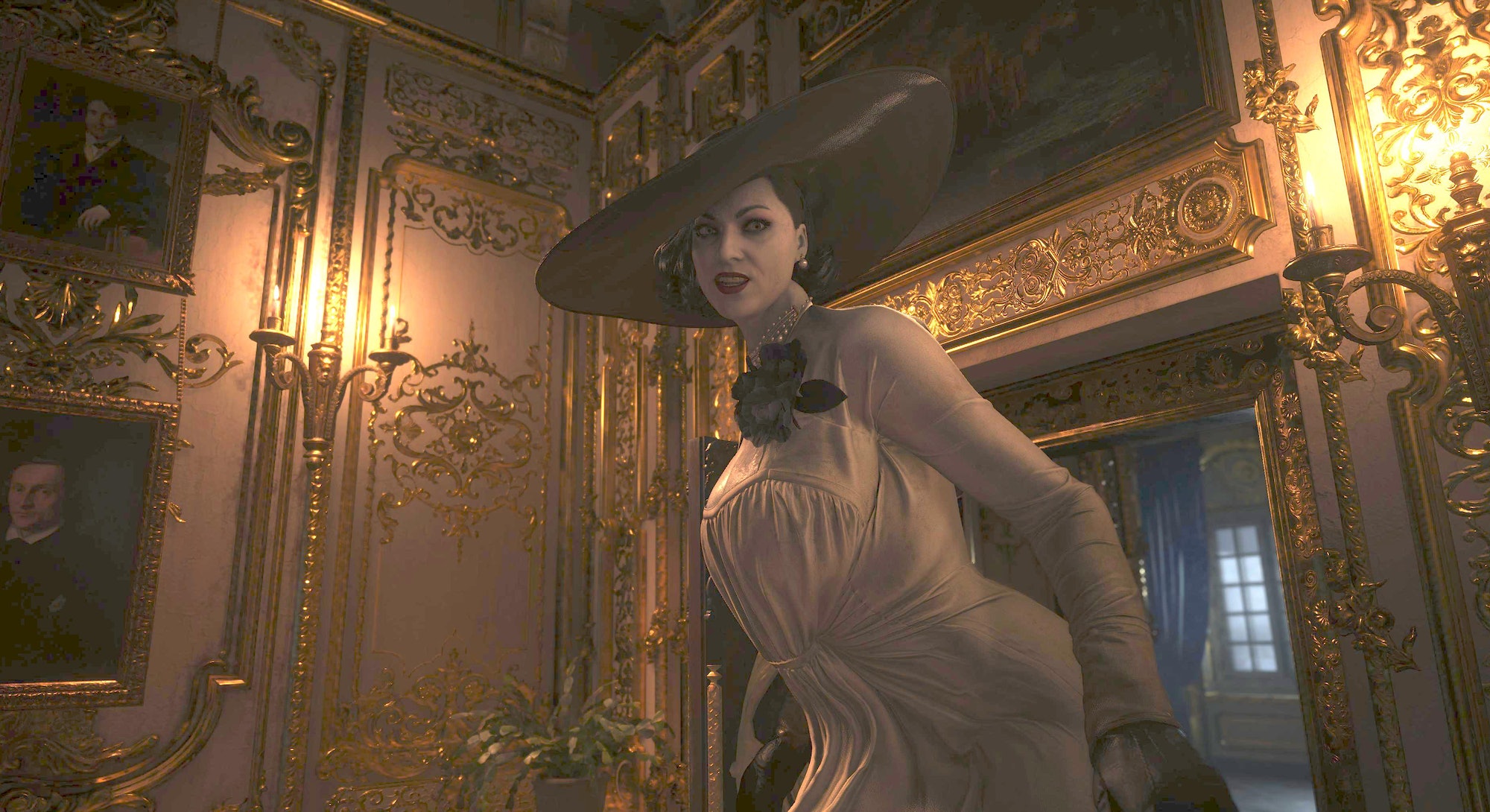 They continued their research in freezing conditions, with the wind blowing snow all around them. “That expedition really helped our design vision,” Game Director Morimasa Sato tells Inverse. “Perhaps the village would look very different now if not for mother nature’s intervention.”

The harsh winter cold is menacing and palpable throughout Resident Evil Village, whether you’re stalking through a dungeon or enduring the chill of Castle Dimitrescu. How different would the experience be if the setting was paired with the brightness of spring and summer, or the decay of fall?

Inverse spoke with Resident Evil Village Sato about the game’s setting, enemy design, themes, and why every wicked enemy — even Lady Dimitrescu — needs a scientific explanation.

Resident Evil Village was designed as a “theme park of horror” where players would interact with very different types of horror. To ensure environments and gameplay all felt fresh up until the very end, and felt that offering a variety of horror would be a good way to keep players interested — and on their toes. The game has a central village hub for the player to explore with plenty of treasures to find and monsters to fight. The village then branches off into four primary environments ruled over by a unique lord who embodies a different style of horror.

Different themes and subgenres of horror help differentiate each of the four main locations. When you step into House Beneviento’s tight hallways, you feel a sense of claustrophobia, almost like you’re playing a Silent Hill game. Given that its lord is a possessed doll, House Beneviento definitely fits the creepy doll aesthetic that’s so popular in horror stories like Annabelle. Additionally, the house’s more plain interior contrasts with that of the grand Castle Dimitrescu.

“We wanted it to be a sharp juxtaposition to what you see elsewhere, such as the village, which is worn down and decrepit,” continues Sato. “It’s a good example of how we wanted to make sure each location offered something different and new for anyone stepping into its premises for the first time.”

The team designed Castle Dimitrescu and its residents under the general motif of horror that’s terrifying yet beautiful. The development team wanted that mix of emotions to be a new and uneasy sensation that players would feel as they stepped into the castle grounds. From the ornate details of the furniture to the aesthetics of Lady Dimitrescu and her daughters, players will notice the detail and beauty present within the castle — and the obvious allusions to Dracula

“You could say that Resident Evil Village is very much composed of the DNA of RE4 and RE7.”

The previous game in the series that focuses on many of the same characters, Resident Evil 7: Biohazard, stays confined to a single house, with some outside areas here and there. Sato says that it was a more “modern horror” take on things where murderers inhabited a single mansion. In Village, scaling things up from a mansion to a village and its surrounding area was made fairly early in the development cycle.

By incorporating a village at all, it became obvious that the game would also draw inspiration from the fan-favorite Resident Evil 4 as well, given that they had similar settings in a village overwhelmed by infected residents.

“When players aren’t running frantically for their lives, we wanted people to be able to walk by a dining table or bedroom and really envision the kind of lifestyle that someone had there,” Sato says. “You could say that Resident Evil Village is very much composed of the DNA of RE4 and RE7.”

Due to the expansion, the team took on a more “gothic horror” approach to enemies and environments. As with any development cycle, the enemies went through various changes in terms of balancing and design, but the overall image and direction remained consistent.

At one point in time, Lady Dimitrescu had dozens of daughters that roamed the castle, but they were trimmed down for balance purposes. Multiple designs were played around with, such as giving them whips or giant scissors for weapons too. The team ultimately landed on the curved blades and black garbs we see in the final game, but the general vibe of terrifying yet beautiful was there from the start.

Sato confesses that with each new entry in the series, the development team tries to establish a fresh outlook: “We try to free our minds of any restrictions that might bar us from exercising our creative juices,” he says.“From there, we slowly have to weave in elements such as a game’s fun factor, balance, as well as other things such as uniformity between gameplay and game world.

During the development processes, mechanics or designs might change or be cut for one reason or another. However, those sacrifices are always made for the greater good of the game. Sometimes an idea might be good on its own, Sato says, but if it clashes with other elements, it might ultimately be cut.

As a result of expanding the scope of the setting, the variety of enemies that were needed to fit the various locales naturally increased. The team put a lot of emphasis on making each creature, including the four lords, unique and memorable. There are many different areas centered around the main village, each designed to provide a different kind of horror that mimics the traits of the four lords.

In order to ground the enemies in a unified “gothic horror” feel, many were based on classic horror monsters. “We took the classic images of monsters such as vampires and werewolves and dropped them into this setting,” Sato says. “We wanted to have that level of familiarity with the enemy types, such as the bloodthirsty nature of the Dimitrescu family, or the wolf-life nature of the lycans hunting in packs.”

In order to make these enemies fit within the more realistic, science-driven Resident Evil universe, the lore behind their creation had to be changed. One common observation is that both RE7 and Village both move away from the traditional “zombie” enemy. The latter game also doesn’t feature the Molded, the plant-based monsters present in the former title. “Something we’re always conscious of, not just in Resident Evil Village, but in all Resident Evil games, is that no matter how mystical the enemies may seem, they’re always steeped in some kind of scientific explanation,” Sato says.

We see this with the Dimitrescu daughters, who were transformed into swarms of insects, and lycans bear high enough intelligence to wield different kinds of weapons. Sato says that even if the enemies look and feel different between Village and its predecessor, there’s always an underlying rule that there is a practical reason for their existence.

Sato also notes that “family” is the theme that really unifies the world of RE7 and Village.

In the former, the theme can be seen through Ethan’s interactions with the Baker family, but in the latter, the development team wanted that kind of dynamic to be present as well with the Dimitrescu family. More broadly speaking, the team also envisioned the four lords under Mother Miranda, the mastermind seemingly behind all the events in the game, as their own family unit.

“Each lord has their own distinct personality and characteristics,” Sato says, “So we made sure to have some interaction between them to have that familiarity as well.”

The family motif doubles as the main driving force for Ethan Winters too. Following a brutal opening sequence that tears his family apart, Ethan winds up in the lycan-infested village searching for his daughter Rose. It wasn’t so much that the Baker family directly influenced the families in Village, but more so that the theme of family is part of all the character dynamics — as is a sense of legacy that winds up being a bit ironic in Village.

Ethan’s last name is “Winters,” which comes across as ironic given the fact that Village is set during the season’s peak. “That’s a good observation!” Sato says when asked about it. “Ethan’s last name did not have any bearing in making the village snowy.” Still, it’s a fitting twist of fate.