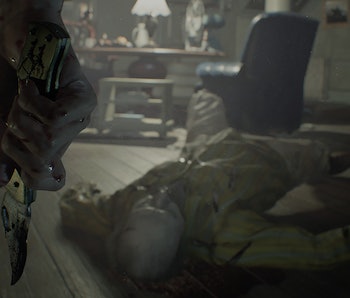 The dinner scene from Tobe Hooper’s immortal classic The Texas Chain Saw Massacre haunts me to this day, and while I played a preview of Resident Evil 7: Biohazard, I felt that dread all over again. Capcom’s newest entry in its storied Resident Evil series feels like it’s been ripped straight out of a grindhouse drive-in, and with a new first-person perspective and a severely overwhelmed and underpowered protagonist, Biohazard is a stylish reboot that will divide franchise vets but entice almost everybody with dreadful, atmospheric immersion.

Directed by Koshi Nakanishi, the new Biohazard started as a VR demo titled Kitchen, which I played at San Diego Comic-Con last year. Kitchen enjoyed brief notoriety as the first legit VR horror, and consequently there’s a lot of Kitchen in the DNA of Biohazard. But all American Gothic horrors owe much to Texas Chain Saw. The scene I strongly recall is when Sally (Marilyn Burns) wakes up tied to a chair at the head of a cannibalistic dinner table, screaming her lungs out while an inbred family feasts on her best friends. To Sally, this is a nightmare she can’t wake from. To the family, it’s Tuesday.

The creepy house layered with cobwebs, the visual language communicating claustrophobic space, and the juxtaposition of terror and mundanity in the same space is still gold more than 40 years later, and these it’s these hallmarks I found in Resident Evil 7: Biohazard. There’s little about the plot I can elaborate, but in short you play as Ethan Winters, an ordinary man searching for his wife last seen on a Louisiana farm belonging to the Baker family. Ethan is a departure from almost all Resident Evil games which starred action hero cops like Jill Valentine and Chris Redfield. In Resident Evil 4, often regarded as the best in the series, federal agent Leon Kennedy attempts to rescue the U.S. President’s daughter. In Biohazard, you’re a schlub who can barely punch, which is bad news every time you encounter household patriarch Jack Baker.

I’m not sure if Jack is the game’s true antagonist, but as equal parts Leatherface and Paul Giamatti from Sideways (“I am NOT drinking any fucking merlot!”) Jack is a formidable monster each time he backs you to a corner, figuratively and literally. Many of his “boss fights” are scripted, but others are spontaneous, and you have to escape his pursuit until the coast is “clear.” There’s some familiar Alien: Isolation at work in Resident Evil 7, and compounded with Ethan’s ineptness — no more of those sweet roundhouse kicks — fear and tension is at an all-time high, all the time.

Also new and unique to Biohazard is the first-person perspective, the first in the main series that benefits the game’s immersion as an intimate horror the last few Resident Evil games weren’t. The first-person functionality will work with PlayStation VR, and the whole game can be played as such, but ultimately it’s optional. (I played the demo without VR, so I can’t report if it altered the experience in any fashion.)

The location you’re trapped in throughout Biohazard is, expectedly, littered with puzzles, pick-ups, and collectibles that reveal insight into the game’s backstory. Exploration is the second biggest feature in the game, and it’s where it feels like its most purest Resident Evil. Yet anyone knowledgeable with the genre will immediately feel echoes of other horror FPS games like Condemned: Criminal Origins or the indelible System Shock 2. And yes, anyone who played P.T. will know Biohazard instinctively. While Biohazard is admirably trying new things, it’s risking becoming so much like everything else in its genre.

Longtime fans of Resident Evil, most of them used to default expertise in survival, might be turned off when they play as the severely underpowered Ethan. But no one can deny the series is trying something new, and that goes beyond the still-novel VR functionality. Playing through and trying to survive Resident Evil 7, which I failed many times because of my own shortcomings with horror games, made me remember the infectious hysteria of Sally and her skin-of-her-teeth escape from the maniacal Leatherface.

I can’t wait to return.

Resident Evil 7: Biohazard is scheduled to release on the PC, Xbox One, and PlayStation 4 on January 24.